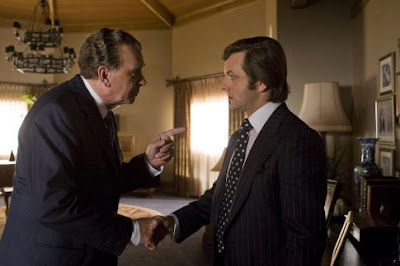 Celebrated former sitcom voiceover narrator and occasional guest star on The Simpsons Ron Howard outdid himself with Frost/Nixon. I'm just goofing on Ron, but what a great reminder of how formidable a director he can be. The 1970's setting in Frost/Nixon is persuasive and the performances in the key roles by Frank Langella and Michael Sheen are two of the finest of the year. Especially Langella, who creates a tormented, fascinating, sympathetic portrait of Nixon. The interviews between David Frost and Richard Nixon play like a devastating prize fight. The war of words and unlikely triumph by the underdog over the tenured, superior champion is in its own way as thrilling as a Rocky movie. We see an awkward, uncomfortable, but defiant Nixon ultimately, painfully humbled by the unlikeliest of giant-slayers. I loved how Langella's Nixon spends the whole movie mindfucking Frost, who maintains a bizarre obliviousness that ultimately benefited him. Meanwhile, Nixon is so embroiled in his guilt and self loathing that despite running rings around Frost, he provides Frost with the means to glean that historic confession out of him. (The pivotal, entirely-fabricated scene where an inebriated Nixon calls Frost and lays his soul bare was the one moment I couldn't fully buy into, though the acting is killer and cemented the similarities Nixon saw between him and Frost.) There's a brilliant runner throughout the movie about Frost's "too effeminite" Italian loafers that ends with a terrific payoff. It was also fun to see Kevin Bacon, who said in JFK "Nixon was gonna be one of the great Presidents of this country before Kennedy fucked it all up!", get to play the Waylon Smithers role to Langella's Nixon. If Josh Brolin is worthy of an Oscar nomination for W., then so is Langella. Between George W. Bush and Richard M. Nixon, I vote Nixon by a landslide.
Posted by Back of the Head at 11:10 AM