The Cabin in the Woods

THE CABIN IN THE WOODS 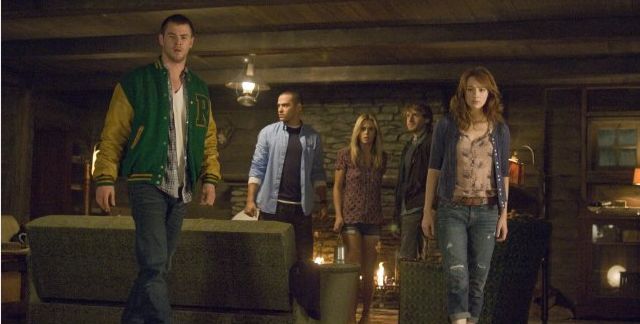 ** SPOILERS **
The Cabin in the Woods is a gleefully Joss Whedon-y genre mashup (co-written and directed by Drew Goddard) where five unsuspecting college-age friends are caught up in a camping trip from Hell involving a bunch of throwback Whedon supernatural concepts from Buffy the Vampire Slayer, Angel and Dollhouse. We're introduced early to and spend a lot of time with Bradley Whitford and Richard Jenkins, who look like they could be 1960s NASA eggheads but actually work for a blend of the Dollhouse and Angel's sinister law firm Wolfram and Hart.

Their organization, one of several around the world (a lot of fun is poked at Japan and their penchant for creepy long haired girls as monsters like in The Ring), serve The Ancient Ones, the original gods that once walked the Earth but are now perfectly content to remain deep in the bowels of the world if they get five specific souls sacrificed to them every once in a while. Seems like a reasonable dealio to prevent the annihilation of all human life on Earth, unless you're one of the five people chosen to be served up to the monsters from beyond.
The five poor campers, a knowingly typecast Scooby Gang consisting of an uber hero jock (Thor himself, Chris Hemsworth), a "whore" (Anna Hutchison), a scholar (Jesse Williams), a "fool" (Fran Kranz from Dollhouse, amusingly stoned the whole movie), and "a virgin" (Kristen Connolly), all trek to Hemsworth's "cousin's cabin" in the woods, which is actually located in a virtual reality version of The Truman Show (there's even a security guard named "Truman"), and built above a vast complex housing dozens of varieties of horror movie-staple monsters. They are finagled into a basement loaded with supernatural talismans and inadvertently choose the monsters by which they will die (a family of zombies, it turns out, to the chagrin of Whitford, who desperately wants to see a Merman.)
Who lives and who dies, and how the organization Whitford and Jenkins work for gets its viscera-soaked comeuppance, is where the fun comes in. The Cabin in the Woods laudably presents a bonanza of feints and surprises; I especially liked Hemsworth's Hero Moment where he jumps a gorge on a dirtbike with hilarious results. Whedonites are treated to cameos by several Friends of Whedon, like Tom Lenk from Buffy and, most welcome, Amy Acker from Angel. The final act involving a monster mash gone wild feels like the final moments of the series finale of Angel followed through to its goriest, earth-shattering conclusion, only without Angel himself, sword in hand, ready to go slay a dragon.
Posted by Back of the Head at 3:49 PM