Batman: Get Me The Hell Off This Earth One 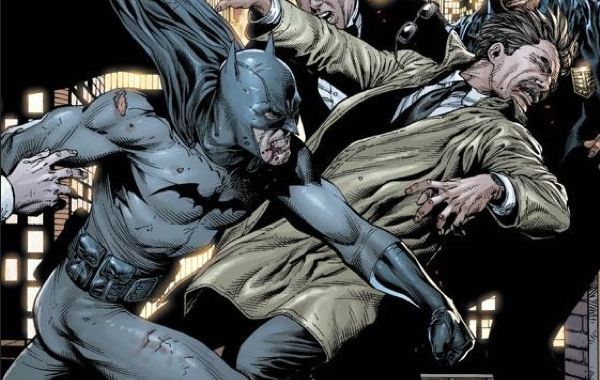 Batman slugs Jim Gordon, because he is a dummy.

** SPOILERS **
Batman: Earth One by Geoff Johns and Gary Frank is the second DC Comics graphic novel set in an alternate Earth that reimagines DC's iconic characters, following last year's Superman: Earth One. After reading his Justice League and now this, I might as well just accept the conclusion I've come to that I just do not like Geoff Johns' comics. I don't get why he's so celebrated. I don't find his writing anything special or extraordinary where he's regarded as one of the mega talents of the comic book industry and one of the Powers That Be in DC. I understand many people love the guy and his books $ell. Hell, I got Batman: Earth One because of the hype, and because of Gary Frank. Him, I do like. His artwork is fantastic.

Gary Frank's art aside, I don't know if I could have enjoyed Batman: Earth One less. For everyone who complained about The Amazing Spider-Man and "why do we need to see the origin again?", well, here's Batman's origin again. It's different for the sake of being different. Is it a better origin of The Batman? No. Not at all (pretty art aside). If anything, it makes Bruce Wayne less admirable and a hell of a lot less likable than, say, Batman Begins did. Maybe it's a more 'realistic' spin, if that really means anything to a story about a billionaire who dresses up as a bat to hunt criminals. I'll give Johns this: He used maybe ten cocktail napkins to write this story as opposed to the one he uses for each issue of Justice League.

So, what's different in Earth One?

Thomas Wayne was running for Mayor and was on track to win when he was killed. His death was a hit by the man who is now Mayor of Gotham City, Oswald Cobblepot. (I did like this version of Penguin and the hints of Batman Returns in Oswald being mayor. Especially how disgustingly he eats.) The hit however failed when little 10 year old asshole Bruce Wayne caused his parents to go into an alley and get killed by a common criminal. Either way, Waynes are dead and Oswald got what he wanted.

Martha Wayne's maiden name is Arkham. She's Martha Arkham-Wayne, and she grew up in a condemned old house currently housing a serial killer that may or may not become Arkham Asylum in future Earth One installments.

Bruce Wayne is incompetent as Batman. This is, of course, "realistic". His Bat grapple gun and other gadgets don't work. His cape is just a cape (until it isn't). He's not the best trained or best detective in the world. He's really not very good at all. He's arrogant and foolish and stupid. Nor did he apparently travel the world to learn his skills. Alfred taught him how to fight.

Alfred is the biggest change, and this is because of Downton Abbey. Alfred was a war buddy of Thomas Wayne who saved his life in the desert and lost his leg. So in gratitude, Thomas brought Alfred on to be his butler. Johns swiped this wholesale right from Downton Abbey. Alfred is a bad ass in this story, and he thinks Bruce is an idiot and Batman is a stupid idea, and he saves Bruce's life more than once. Because Bruce is an idiot and Alfred is right.

Gordon is a weak cop who finds his mojo to become a better cop. His wife is dead and Barbara Gordon is in the story, who later is inspired by Batman to start wanting to be Batgirl. She is also kidnapped and nearly killed but isn't shot through the spine. (No Joker in the story.)

Harvey Dent is still DA but he has a twin sister Jessica, who's Cobblepot's main political rival. Neither Dent becomes Two-Face.

Harvey Bullock is a handsome, TV star cop shades of Kevin Spacey in LA Confidential who comes to Gotham to find out who really murdered Thomas and Martha Wayne, then gets embroiled in the seedy criminal world of Gotham. By the end, he starts drinking.

Finally, Lucius Fox is here, he's younger, and he works for Bruce Wayne as his Q, building him Bat gadgets that actually work.


By the end, knowing he barely survived his own incompetence several times, Bruce and Alfred decide that they need "to build a better Batman". What does that mean? Don't know. Suddenly Batman is back in action and we're meant to presume he's 'better'. If they were going to build a better Batman, I wish they'd started with this graphic novel.
Posted by Back of the Head at 5:05 PM