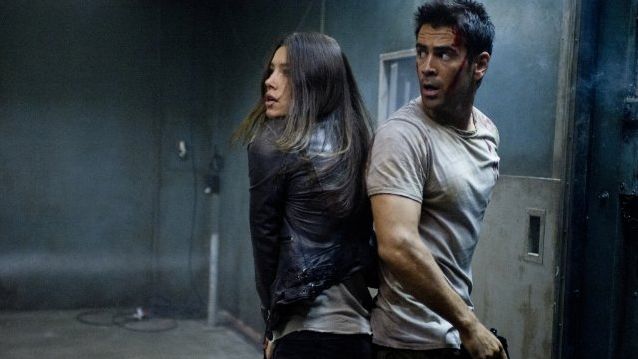 The Fall Enslaves Us All

The funniest bit about the 2012 remake of Total Recall occurs at the very start of the opening credits when the logo of the production company Original Film is shown. Once the movie actually starts, Total Recall is pretty okay for a while, until everything just starts exploding and the explosions resolve everything. You know what else Total Recall is? The Bourne Identity. Stop me if you've heard this one: Colin Farrell is missing chunks of his memory, discovers he has deadly combat skills, and finds a message implanted in his body leading him to a safe deposit box filled with weapons, money (Barack Obama is on the money of the future), and false identification. He must then uncover his role in a vast conspiracy as he learns he's the most dangerous super spy in the world. Unlike Jason Bourne, however, Farrell has two really hot action movie-credible babes, Kate Beckinsale and Jessica Biel, fighting over him, sort of.

In the new Total Recall, it's the 22nd century and real estate is an uninhabitable Earth's most precious commodity. (Weird, then, that no one lives on Mars, though there's an in-joke from Farrell where he wistfully wishes he could go to Mars.) The only places people can live on Earth are the United Federation of Britain - where all the Caucasians with English and American accents live - and The Colony, which is what they renamed Australia, now home of all the Asians. The London of the future is a Jetsons-like multi-leveled city in the sky navigated by flying cars, though the original London remains on terra firma where people still drive cars on wheels. Australia has been impressively Blade Runner-ized into a colorful, blocky Chinatown where prostitutes offer their Total Recall trademark three boobs in the intriguing red light district. Farrell lives in The Colony with his wife Beckinsale but works in a military robot factory in Britian; everyone commutes* to work via The Fall, which is a Disneyland Tower of Terror ride that shoots passengers through the Earth's core.

Farrell isn't happy with his meager life and he has dreams about Jessica Biel. So I can relate. When he visits the Rekall Center to get some exciting "memories" of being a secret agent implanted into his brain, he finds out he already is a secret agent and white storm trooper killbots arrive to kill him. Then he runs home to his wife Beckinsale and she tries to kill him. Farrell has no time to even comment on how he thought Beckinsale was American but when she reveals she's evil, she starts speaking with a British accent. Now on the lam, an increasingly confused Farrell gets picked up by Jessica Biel and finds out, via messages he left for himself, that he's not really Colin Farrell, factory worker, but he's in fact Colin Farrell, super duper future spy. He was a double agent sent by the evil Chancellor of Britain, Bryan Cranston, to infiltrate the resistance movement led by Bill Nighy. Or is he? Yes. But everyone keeps trying to confuse him. And kill him, especially Beckinsale, who gets more and more embarrassed each time she tries to kill Farrell and somehow fails. She can't seem to kill Biel either and that pisses her off even more.

In spite of the vast resources, including hordes of soldiers and robots led by Beckinsale, Cranston expends to kill Farrell, it turns out he didn't really want Farrell dead and was just using him to learn the secret location of Nighy and the resistance. Nighy barely has a walk on in the movie before Cranston arrives and pops a cap in him. At this point, just about everyone is hopelessly confused, as Cranston reveals that his grand scheme all along was to lead a full invasion into The Colony, slaughter all the Asians, and replace them with white people from England. There's also a quick explanation that "synthetics" will replace the Asians in doing all the menial work, because Asians don't dream of electric sheep, or something.

Cranston wants to do all of that and wanted to blame it all on Nighy. He just needed Farrell to find him. Or something? I'm not sure. No one is sure. And it doesn't matter because Farrell is captured, Biel is captured, and Farrell has to free himself and save Biel and kill Cranston, in that order. Also Beckinsale, who won't quit trying to kill Farrell because she really hated pretending to be married to him for six weeks, I guess. How does Farrell do all of this? With explosions! Because in the future, teeny tiny time bombs that can bring down enormous super structures have digital red countdowns on them, and Farrell's got more than enough to explode The Fall. The good news is, the explosions work. They work better than the copious amounts of automatic gun fire that never seems to hit anyone unless the script calls for Farrell and Biel to get clipped on the wing. Thanks to the explosions, Farrell accomplishes all of his goals and saves The Colony and gets a better future with Biel in the end. All of his dreams come true. Except going to Mars, but maybe he can have the original Total Recall planted in his brain for that.

*Total Recall does score brownie points with me for having Farrell reading a worn, dog-eared copy of Ian Fleming's classic James Bond novel "The Spy Who Loved Me" during his commutes on The Fall.
Posted by Back of the Head at 3:23 PM