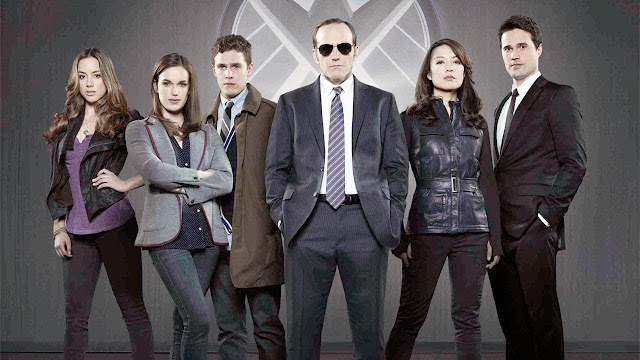 They say you shouldn't burn bridges, but Marvel's Agents of S.H.I.E.L.D. does just that, in a good way. "The Bridge," an ante-upping, slam-bang midseason finale, at long last follows up on the story threads woven in the pilot as the Agents once again are hot on the trail of the terrorist group Centipede, last seen in "The Girl in the Flower Dress" back in episode 5. In Skye's words, S.H.I.E.L.D. has been playing whack-a-mole with Centipede since their encounter with the ill-fated, would-be superhero Scorch; forcing Centipede on the run as S.H.I.E.L.D. locates and shuts down their bases of operation. Centipede's Extremis-powered super soldiers are also being jeopardized by being constantly on the run. Thanks to experiments on Scorch, the Extremis has stabilized so the soldiers no longer explode, but there are continuing issues with their technology. We also learn Centipede is responsible for the eye implant technology we saw in "Eye Spy." It's all connected! And it's about to get even more connected, like the dots and four.

Centipede's Extremis soldiers bust Edison Po out of prison. Who is Edison Po? He's the guy we saw in the tag at the end of "The Girl with the Flower Dress." He also seems to be a foodie who really likes his steak. More pertinent, he's both a killer and some sort of tactical expert with direct ties to Centipede's mysterious leader the Clairvoyant, acting as the Clairvoyant's mouth piece. Both Skye and May voice their opinion that they'll need some serious backup from S.H.I.E.L.D. if they're taking on superpowered Extremis soldiers. Instead of a squad of Agents, S.H.I.E.L.D., an organization that must be pinching pennies since their giant island fortress the Triskelion houses multiple flying helicarriers (and those don't come cheap), sends Coulson's group one man: enter M.I.K.E. P.E.T.E.R.S.O.N., Agent of S.H.I.E.L.D. (I won't be typing that again).

Peterson, played with wit and pathos by the J. August Richards, is of course, the Agents of S.H.I.E.L.D.'s first case together and the reason Skye is on the plane. Coulson directly recruits Peterson from the S.H.I.E.L.D. version of Quantico where Peterson has been busy failing to beat Captain America's record for pushing a tractor across a football field. When Coulson tells Mike to "suit up," it turns out he was referring to an actual business suit, which Richards sports with style and aplomb. Meanwhile, Fitz-Simmons, the owners of S.H.I.E.L.D.'s Men's Warehouse, apparently (you're gonna like the way you look, they guarantee it), cook up a superhero-esque black uniform for Mike. This after Simmons flirts with him awkwardly. It seems like Fitz-Simmons have been watching Will Smith's Hancock on the Bus because the suit they give Peterson looks a lot like that. May and Skye, both good at math, apparently, again voice the opinion that perhaps they need more backup against Centipede. Mike Peterson has Extremis powers, the Centipede soliders have Extremis powers. 1 < More than 1 = Math. Coulson says, "Hey, the budget of this show is out of my hands" (in effect). Mike's the best (also only special guest star) they've got.

Before, during, and after encountering Centipede, our Agents deal with a lot of personal stuff, all to the angry scowls of May, who would like to focus 100% on the mission and reacts with fury at everyone trying to weave subplots into the episode. May doesn't want Ward making goo goo eyes at her while sparring or taking hits for her during combat in the field (despite Ward explaining the latter was entirely tactical), and she does NOT want to deal with Skye's continuing search for her birth mother. May really lays into Skye, forcing her into her bunk and making her cry. Coulson is torn throughout the episode about which of the Agents under his charge to give calm, fatherly advice to. For once, he leaves Skye be and chooses the fellas: Coulson and Ward driving Lola on an undercover mission have an interesting conversation about Coulson's love life and the toll his dying took on that girl in Portland who plays the cello he told Tony Stark and Pepper Potts about in The Avengers. (We also learn the Avengers still think Coulson is dead.) Coulson also takes the time to counsel Peterson about his son Ace and why Mike hasn't seen his son since the events in the pilot. Skye does the same, since she and Peterson have that "We were the focus of the pilot" connection. We realize that Peterson is kind of unique on this show: an Agent of S.H.I.E.L.D. who actually has family he cares about and a personal life. Most S.H.I.E.L.D. Agents seem to lack that, including significant others.

It seems like Peterson is the person Centipede actually wants to capture. Turns out when Ward shot Peterson in the pilot, the tech in whatever Fitz-Simmons armed the gun with was what stabilized Peterson's Extremis so he could control it. Going right for his Achilles Heel in that way Spider-Man always dreads, hence the secret identity, Centipede kidnaps Peterson's son and arranges a trade on a bridge for Peterson. But man oh man, did S.H.I.E.L.D. get played: Turns out Centipede didn't want Peterson -- it was Coulson they wanted all along! And Peterson helped set Coulson up to save his son. Once Coulson understood, he took the betrayal rather calmly. Poor Mike Peterson, a guy who tries to do good but is forced into moral compromises that betrays his friends. He'll never be like the Heroes of New York Avengers action figures he bought his son. While Mike does retrieve Ace and leaves him safely with Skye, Mike attempts to save Coulson from Centipede and is blown up in the process, sparing him the indignity of being imprisoned by S.H.I.E.L.D. or worse yet, being forced to wear an Internet Nanny Bracelet of Treason like Skye. Centipede, with Coulson taken prisoner by Raina, the Girl in the Flower Dress, and Edison Po (they of the creepy finger-touching interaction), escape via helicopter and open fire on Ward, injuring him, as Skye screams in terror and May looks on, helpless and scowlier than ever.

Why did Centipede want Coulson all along? Because they, like everyone watching at home, want to know exactly what happened the day after Coulson died. Kudos to Centipede, then, for not sitting around waiting for answers and going out and doing something about getting some. That sort of makes Centipede heroes, I suppose. But not really. They're very Big Bads. Thus ends the first half (more or less) of season one of Marvel's Agents of S.H.I.E.L.D., in rather intriguing The Empire Strikes Back-esque fashion.

Looking very much forward to Return of the Coulson in January.
Posted by Back of the Head at 9:15 AM