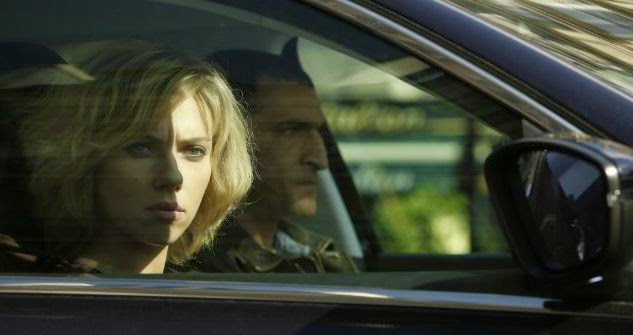 In Luc Besson's bloody, bizarre, blisteringly entertaining Lucy, a gloriously game and thoroughly committed Scarlett Johansson stars as the title character, an American ex-pat living in Taipei. Lucy had the misfortune of dating (for a week) a skeevy drug trafficker who handcuffs her to a mysterious briefcase and marches her into a skyscraper owned by Chinese gangsters, lead by Min-sik Choi as the fearsomely perspiring Mr. Jang. In short order, Lucy is terrorized, battered, victimized, and forced to become a drug mule. Lucy has the contents of said briefcase sewn into her abdomen -- blue drugs called CPH4, which a surgeon explains is like "an atomic bomb" to a growing fetus. To the full-grown Lucy, it's certainly that, and much more. After being physically assaulted yet again, the bag of CPH4 bursts inside her and flows into her bloodstream, allowing her to unlock 100% of her brain capacity, gradually giving her godlike powers like matter transference, telekinesis, clairvoyance, and even time travel. If that's not impressive enough, she learns to speak Chinese in an hour and gives a car chase as breakneck as Steve McQueen despite never having driven before.

As Lucy adjusts to her astounding newfound abilities, she emerges as equal parts superhero, action heroine, and metaphysics philosopher. Lucy gives us a Jake the Explainer character in the form of Morgan Freeman, a professor in Paris who just happens to be lecturing on the theoretical potential of a human being reaching 100% brain capacity at the very same time that very event is occurring in Taipei. What are the odds? Once able to manipulate radio waves and broadcast signals, Lucy contacts Freeman, mainly so she can have someone to vocalize what's happening to her. Lucy doesn't need Freeman, per se, but who better for a girl going through changes to talk to than Morgan Freeman? All throughout Lucy's rapid evolution, Besson aims squarely at the audience's noses with constant cutaways to animals and nature (we even learn the first hominid was named "Lucy.") Besson's science is questionable at best, but scientific accuracy is hardly the point of Lucy.

In the best scene in Lucy, during a touching phone call to her mother, Lucy intriguingly tries to convey the myriad sensations of her increasing brain capacity, as she laments both her mortality and her humanity slipping away. Besson truly goes for broke in the third act as Lucy achieves 100% brain capacity and invokes dozens of Marvel and DC Comics characters with her abilities, including a ballsy time travel sequence where Lucy essentially becomes Metron of the New Gods. Despite the presence of Chinese gangsters, Interpol cops, and ultra-violent shoot outs, it seems as if Besson is attempting to direct his own version of Cosmos: A Space-time Odyssey, but he isn't. With Lucy, Besson is delivering a viscera-soaked, visually trippy, action-packed, science fiction tour de force of heady ideas that only Lucy herself seems to fully comprehend. Amusingly, Lucy's conclusion could even be interpreted as Lucy being an unintentional prequel to Her, which also stars Scarlett Johansson's milky voice. At the end of Watchmen, Dr. Manhattan left Earth for worlds unknown. If he'd stuck around, he would have met his match in Lucy.

Complaining about the factually flawed science in #LucyMovie misses the point. It's science *fiction.* Do you complain about the X-Men?
— John Orquiola (@BackoftheHead) July 30, 2014