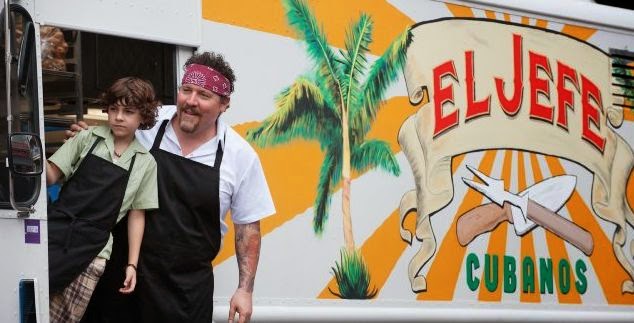 What's truly important in life? What can't we live without? Family. Food. Social media. Well, not that last one, but even Jon Favreau eventually realizes its usefulness after letting Twitter nearly ruin him. Chef, written and directed by Jon Favreau now free of the weight and clang of Marvel's Iron Man armor, is one of the sweetest -- and most mouthwatering -- movies I've seen in a long time. As disgruntled Chef Carl Casper (@ChefCarlCasper), Favreau blows a steady but uninspired career as chef de cuisine for respected LA restauranteur Dustin Hoffman after a Twitter flame war with food critic Oliver Platt. Without prospects to get back in a kitchen, Favreau reluctantly begins to rebuild his career, accepting help from his ex-wife Sofia Vergara and her ex-husband Robert Downey, Jr. to operate a food truck ("El Jefe") selling Cubano sandwiches in Miami.

Most importantly, Favreau accepts his estranged young son Emjay Anthony and begins training him as a cook, with help from his trusty sidekick John Leguizamo. What follows is a predictable but utterly charming and heartwarming story of a father and son reconnecting on a cross country journey back to LA as Favreau imparts his knowledge and love of food, sometimes gruffly, and Anthony secretly aids his father's cause with an understanding and mastery of social media any modern child today possesses. Along the way, Chef serves up absolutely succulent-looking food porn, overseen by Favreau's culinary mentor Chef Roy Choi. One needs to merely overlook Favreau (who amusingly takes a few shots at his now husky physique) casting knockouts Vergara as his incredibly supportive ex-wife and Scarlett Johansson as his incredibly supportive girlfriend as the more unrealistic parts of his movie. Rather, relish the love on display in Chef, both in the kitchen with Favreau cooking incredible food, and between the characters, relearning the joys and importance of family. Chef is a wonder in and out of the kitchen. Now, let me at one of those Cubanos!
Posted by Back of the Head at 9:59 PM