Gone Girl ranks among the very finest adaptations from novel to motion picture ever made. Written by Gillian Flynn, who penned the best-selling novel, and directed like a maestro by David Fincher, Gone Girl is a lurid, feverish, spellbinding, jaw-dropping exploration of a marriage between two modern day thirty-somethings gone horribly wrong. Horribly wrong. It's an indictment of our bottom-feeding news culture that exploits tragedy for ratings. It's a love story twisted and mangled into something grotesque and abhorrent. It's a wondrously wicked game of he-said/she-said show and tell that yanks the carpet out from underneath you midway through. It's riveting from start to finish, bursting with wild surprises and dark, gallows humor. And if you look really closely at just the right moment, Ben Affleck's penis does indeed make a cameo. (Might as well put that out there since the week of Internet media leading up to Gone Girl's release seemed to be 90% about the rumored presence of Affleck wang. Confirmed. It's there.)

Is it safe to say from an acting performance standpoint, Ben Affleck has never been better? Yes. Ben Affleck has never been better. Ideally cast as a less-than-ideal husband to the titular gone girl Rosamund Pike, Affleck centers Gone Girl like the movie star he is. Affleck transforms throughout the movie from a sad, pathetic guy you hate, to a sad, pathetic guy you kind of like, to a sad, pathetic guy to you kind of root for because holy crap, his wife! As Nick Dunne, a beaten down, angry sad sack who has given up on his marriage, Affleck spends most of the movie being indicted in the court of public opinion and investigated by the police when his wife disappears of the morning of their fifth wedding anniversary. The evidence of violence in the house, mysterious credit card statements, a million dollar life insurance policy, and all other signs point to him. The only people who believe Affleck is innocent (more or less believe, anyway) are his twin sister Carrie Coon and their high-powered, slickster defense attorney Tyler Perry (also terrific). Admittedly, Affleck is not a good guy. He has a secret young, busty mistress, he's a callow, habitual liar, and he may have physically abused his wife in a boiled-over rage.

Affleck's romance with Pike, who plays "Amazing" Amy Elliott Dunne, a beautiful, well-heeled New Yorker, is narrated by Pike via the gimmick of diary entries, showing their rosy meet-cute and happily affluent life in New York City, which is gradually upended into a series of defeats and disappointments as they are laid off from their jobs as magazine writers, and forced by money troubles and Affleck's parents' illnesses to relocate to his Missouri home town. Amy Eliott Dunne is born from psychologist-writer parents who mined her childhood (and bettered her accomplishments and failures in print) for "Amazing Amy," a series of popular children's books. Pike comes with her own baggage; a history of ex-boyfriends who she claims stalked and raped her. She mysteriously has few friends, and five years into their nuptials, she is essentially a stranger, and an unwelcome one, to her husband. And then she is gone, girl. Gone Girl plays like a fascinating exploration of a failed marriage-cum-tragedy and then at midpoint, it takes a wild left turn towards crazy-bananas Albequerque and never looks back.

Did Affleck kill his wife? What really happened to Amazing Amy? Where did she go, girl? Why does Neil Patrick Harris, a fabulously wealthy, effete former lover of Pike, lurk on the outskirts of the investigation? What do all the clues and treasure hunts Pike left for Affleck really mean? The answers are insane, diabolically, entertainingly insane. Gone Girl's second half gleefully smacks down the rows of dominoes it carefully builds, as we marvel at the answers to the mystery and the truth behind Amazing Amy. We find out the name "Amazing Amy" does indeed suit Pike, but not necessarily in ways anyone can find admirable. Pike herself is incredible as Amy, simultaneously appealing and terrifying, intelligent and nefarious, a wife you could be proud to call yours, if you were a psychotic super villain. No one is entirely innocent of blame in Gone Girl, certainly not Affleck, and absolutely not Pike, but in an utterly bizarre way, those two kind of deserve each other.* Forced to choose between two fortunes, for better or worse, richer or poorer, until death does them part, poor Affleck chooses to pick from barrel A: 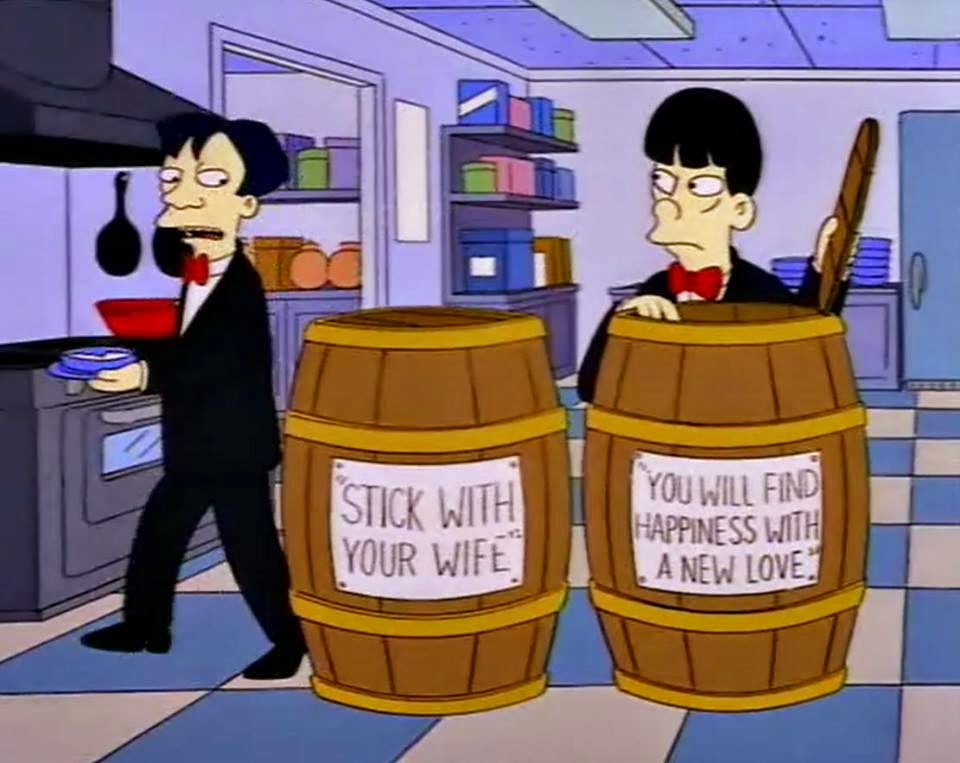 * Affleck's "You fucking bitch." to the bloody Pike when she returns to his arms after her "abduction" may well be the best delivered line reading of 2014.