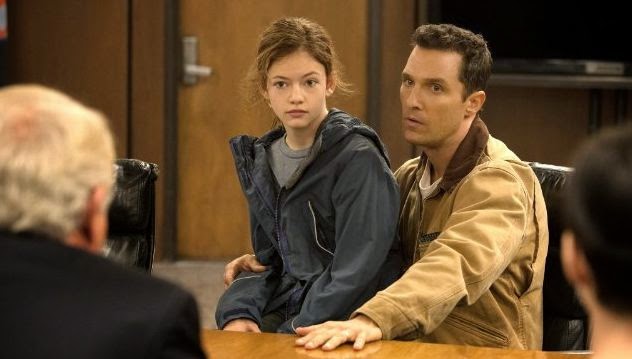 "People used to look up and wonder about our place in the stars. Now we look down and worry about our place in the dirt." This is the blunt and bitter mission statement of Christopher Nolan's magnum opus Interstellar, a grand, ambitious, and hopeful exploration of human drama poised against Mankind's quest to reach unknown regions of deep space in a desperate attempt to save itself from extinction. Positing a terrible future decades from now where war and armies are unnecessary in the wake of a global famine, the human race has become "caretakers" rather than "explorers," as bitterly and bluntly stated by our hero Matthew McConaughey. A worldwide "Blight" routinely kills all the crops of America's heartland with devastating dust storms. Food production is at a standstill. Humanity is poised to die out within a generation. What's a good ole boy who's tryin' to raise a family to do? There's only one answer for McConaughey: save the world.

In Interstellar, Matthew McConaughey plays Matthew McConaughey, a former hotshot pilot and "highly educated" engineer (somehow more believable here than Mark Wahlberg was as an "inventor" in Transformers: Age of Extinction) who stumbles upon strange phenomena in his Midwestern corn farm. A military drone flying overhead that should have been decommissioned. Weird gravity moving objects in the bedroom of his sweet young daughter, the apple of his eye, played MacKenzie Foy. This all leads McConaughey and Foy in the dead of night to a secret location where they stumble upon the secret remnants of NASA, run in secret by the father-daughter scientist team of Michael Caine and Anne Hathaway. They have a plan to save the world, with a name they must have lifted with a wink from their previous encounters with Ra's al-Ghul in The Dark Knight Trilogy: Project Lazarus -- a manned space mission through a mysterious worm hole in space that appeared next to Saturn, taking them to another galaxy to find a new planet capable of sustaining human life. Plan A: get everyone on Earth to the new planet. Plan B: a population bomb, growing new people on the new planet at the cost of everyone on Earth left to die. Everyone agrees: McConaughey has the right stuff. He is gung ho about going; his daughter pleads with him to stay. Their conflict and heartache will span decades across time and space.

With giddy glee, Interstellar unleashes a payload of quantum physics at the audience. Depicting the grim and gritty realities of outer space travel in the Stanley Kubrick 2001/Ridley Scott Alien tradition, Nolan delights in dazzling us with the physics behind a worm hole (totally different from what Star Trek: Deep Space Nine used to depict), the perils of relativity when traveling in space near a black hole (an hour on one watery planet equals a year on Earth -- a catastrophic tidal wave that astronauts McConaughey and Hathaway survive costs the life of Wes Bentley and 23 years of missed time on Earth), and later, an insane jaunt into a black hole and an exploration into the 5th dimension. Interstellar raises intriguing questions: what if there are no "ghosts" or "supernatural" phenomena but instead all of the unexplainable occurrences throughout time are after effects of the actions of Mankind after it has highly evolved into other dimensions, rendering time meaningless? Meanwhile on Earth, Foy has grown up (to the same age her father was when he abandoned her); now played by Jessica Chastain, she struggles to unravel the scientific equation left behind by the dying Caine, discovering the dark secret behind the Lazarus Mission that dooms the human race on Earth (there is no Plan A. It is all a lie). At the very least, Interstellar makes one want to learn Morse code. It could save the whole world.

All the heady science aside, Interstellar is a movie first and foremost and plays to all the tropes of a blockbuster Hollywood film. In another galaxy, McConaughey and Hathaway find an ice planet and a water planet, convenient landscapes available in Iceland where Interstellar was shot. McConaughey space cowboys his way across the galaxy, performing desperate stunts flying his space ship, refusing the very idea that he won't be able to return to Earth to see his daughter again. Hathaway risks the entire mission because she's in love with a missing scientist from the previous Lazarus mission. And no matter how many trillions of miles across galaxies they can travel, put two dudes on an ice world and somehow they'll get into a fist fight. Matt Damon surprises us with a cameo appearance as a scientist-gone-mad who embarked on a prior Lazarus mission on a frozen world, and it's a bravura performance. Damon plays completely against expectation as a sniveling, manipulative, murderous coward.  It's safe to say you've never hated Matt Damon in a movie as much as you do in Interstellar. The feel good ending begs the question of whether it's true that an old woman on her deathbed's fondest wish is to see her sexy young daddy -- all handsome, tanned, tight jeans, just fell out of a black hole -- swagger into the room to kiss her goodbye.

Interstellar is refreshingly anti-Star Wars in that it is the opposite of phallocentric. The central father-son conflict of Star Wars is eschewed in favor of exploring the relationship between fathers and daughters: McConaughey's sweet relationship with Foy/Chastain and to a lesser extent the relationship between Caine and Hathaway. McConaughey has two kids, a boy and girl, and he ain't too concerned about his son, who grows up to be Casey Affleck and is happy to be a farmer as raised by their grandfather John Lithgow. Heartbreaking scenes of McConaughey watching video messages from his aged son aside, McConaughey really cares most about his daughter, who angrily refuses to acknowledge him for decades until their touching climatic reunion when she's an old lady played by Ellen Burstyn. Interstellar's emotional crux is touchingly all about a father's love for his baby girl, as McConaughey breaches time and space to become the very "ghost" that sets about this entire outer space enterprise and enabling her with the means to solve Caine's math equation and save humanity. A stunning, breathtaking behemoth of a motion picture with big brains and a beating heart, Interstellar reaffirms the human spirit with the idea that the best reason to boldly go where no one has gone before is to do it for your family so that you can come back home and be with them. And then go back into space and find Anne Hathaway, 'cause she's all alone out there and she needs some McConaughey lovin'.