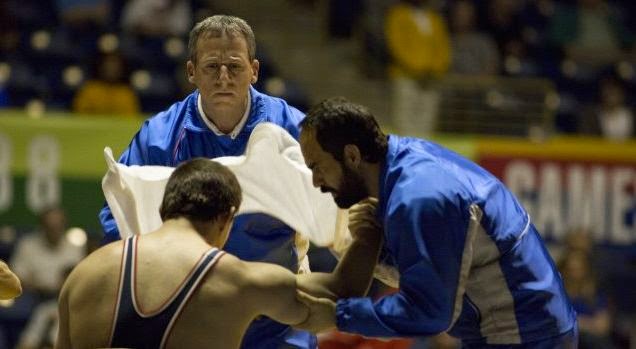 Foxcatcher is the "In Cold Blood" of amateur wrestling movies, fitting since director Bennett Miller also helmed the film Capote based on the novel "In Cold Blood." A sordid, deeply disturbing tragedy and cautionary example of sorts, Foxcatcher depicts the events leading up to the murder of 1984 Olympic gold medalist wrestler David Schultz (Mark Ruffalo) by one of the richest men in America, John E. du Pont (Steve Carell). David Schultz is lured into the web of du Pont's Foxcatcher Farms estate in Pennsylvania after his aimless, disenfranchised brother Mark Schultz (Channing Tatum), also an Olympic gold medalist wrestler, is recruited by du Pont to captain his burgeoning wrestling squad. As Foxcatcher tells the tale, du Pont and Mark experience early success until they have a falling out. Du Pont then recruits Mark's older brother David to coach his wrestling team, after which Mark quits Team Foxcatcher. Du Pont, apparently suffering from paranoid insanity, shot David dead in his driveway, was arrested, and died in prison.

Foxcatcher plays fast and loose with facts and the real life events; the entire film takes place in the 1980s and centers around the 1988 Seoul Olympics, but the murder of David Schultz happened in 1996 and other facts are rearranged to suit the film's seedy narrative. The real Mark Schultz, a supporter of the film until recently, now vehemently opposes and denies events depicted in the film, especially where Foxcatcher implies one of the reasons du Pont and he had a falling out was because they grew... closer... as shown in a scene of du Pont and Mark "wrestling" late at night. Foxcatcher is never less than damning of John E. du Pont, by accounts a sick, disturbed individual with delusions of grandeur. (The film leaves open to mockery his self-proclaimed nickname "the Golden Eagle of America" and his repeated declarations that his wrestling squad is giving "hope" to a faltering America.)

Mesmerizing, incredible performances by Steve Carell, Channing Tatum, and Mark Ruffalo bouy Foxcatcher. Ruffalo is fantastic as David, an amiable, good-hearted, positive force who loved and supported his brother, choosing to ignore all of the warning signs in Foxcatcher Farms. Tatum gives a career-best performance as Mark, a thick-headed, tightly-wound powder keg of unresolved issues.  Carell, aided by wig and prosthetics, shockingly transforms himself into John du Pont, resembling one of the predatory birds (du Pont was an accomplished ornithologist in real life) he loved so much. Carell is never less than creepy and repellant; his slow words preceded by silence and his real thoughts kept a secret from all. Carell's du Pont is, if anything, overwhelming proof that he should follow Burgess Meredith and Danny DeVito as the next actor to portray the Penguin in a future Batman movie.
Posted by Back of the Head at 9:41 AM