Jem and the Holograms

JEM AND THE HOLOGRAMS 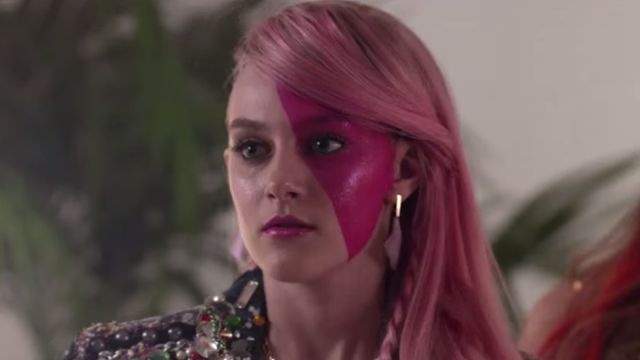 Glamour and Glitter, Fashion and Fame

Jem and the Holograms is a surprisingly earnest attempt to tell a contemporary rags to riches story of a nobody who becomes a famous pop star, centering on themes of finding identity and authenticity in a music industry that prizes manufactured celebrity. "You're famous, not just Internet famous!" is excitedly announced to Jerrica Benton (Aubrey Peeples), a talented but introverted orphan, who reluctantly uploads a song on YouTube in the guise of her face-painted, pink-wigged persona "Jem." Her viral video "gets, like, a million hits" (and more likes and positive comments than hateful messages from trolls - hey, it's a movie!), which attracts the attention of a major LA record producer, played by Juliette Lewis. Accepting an offer for herself and her three "sisters," her actual younger sibling Kimber (Stefanie Scott), rebellious Aja (Hayley Kiyoko), and kleptomaniac Shana (Aurora Perrineau) to perform three concert dates in LA, Jerrica narrates her improbable 30 day rise to fame as Jem in the manner a modern teenager would, via a YouTube confessional video. When the four girls are whisked to LA by Lewis, they leave behind their aunt Molly Ringwald, thereby being passed from the care of one famous 1980's actress to another.

Fans of the Jem and the Holograms cartoon who are of a certain age will bemoan the movie's eschewing the cartoon's mythology for a modern setting and laser focus on speaking to the Tumblr-posting, Instagramming youth of today. Sorry, moms, this Jem is for them. Jem provides odes to the 1980s in Jem's KISS-inspired glam rock look and how her band performs with keytars and flying V guitars. The way the famous dialogue from the cartoon is worked into the screenplay is truly outrageous. However, the movie is maybe 10% comprised of YouTube and Instagram style videos of various fans of all ages, genders, and races confessing their love for Jem and how she inspired them intercut throughout. (Director Jon M. Chu drops in a couple of his famous friends to do gushing Jem tributes, including one that was particularly electrifying.) Jem also outright borrows the staccato drumbeat style of Birdman and Whiplash, as well as homaging the iconography of the biggest female-led teen franchise of the decade, The Hunger Games. Jerrica and her sisters' makeovers blatantly echo how Katniss was transformed into the Girl on Fire by Cinna and her pink dress during her second performance as Jem would make Caesar Flickerman positively gush all over the stage. Jem and the Holograms is a gumball machine hoping to provide a flavor that will please everyone.

"Okay, here's where it gets weird," Jerrica promises halfway through the movie, and she wasn't kidding. Beating Star Wars: The Force Awakens to the big screen, Jerrica happens to have her own version of R2-D2/BB-8, a cute little robot called 5N3RGY ("Synergy"). And yes, Jem does say "It's showtime, Synergy!" How could she not? In between rehearsals, performing shows, and learning how to be pop stars, Jerrica and her sisters launch themselves on a scavenger hunt across LA, following clues left behind by Jerrica and Kimber's dead father. Their father was a loving weirdo, a rock music-loving inventor who did a lot of bizarre forward-thinking, hiding key parts of Synergy around LA, expecting his daughter to find them, coincidentally right when she was having her greatest crisis of self. Her reward for repairing Synergy is a hologram just like Artoo showed Luke Skywalker and Obi-Wan Kenobi, where her dead father provides Jerrica with the secret plans to the destroy the Death Star with a heartfelt ten minute speech about how special she is and how she was always his favorite -- with not a word about her younger sister, his other daughter! Not even a "tell your sister I said 'hey.'"

Meanwhile, becoming the famous pop star Jem isn't without its turmoil. Jerrica finds herself embroiled in a mother-son power struggle within their record studio between Lewis and Rio (Ryan Guzman), who becomes Jerrica's handler and of course sides firmly with his new hot young teen girl friends. Jerrica is pressured to sign on the dotted line as a solo star and send her sisters packing, or else they won't have the money to let Ringwald keep their home from being foreclosed. Once Jerrica signs her exclusive contract (she signs it "Jem," a plot point the movie doesn't follow up on) with Lewis, the screenplay launches into a bewildering third act full of bizarre circumstances and plot holes. Kimber, Aja, and Shana turn on Jem, accusing her of abandoning them and craving a solo career -- which isn't the case at all and could have been immediately settled with a simple conversation, but screenwriting 101 said the band must break up at the end of Act II to reunite in Act III, so. (The band's reunion happens outside Jerrica and Kimber's childhood home, where the family living inside must have been wondering what those five weirdos were doing outside on their porch.) There's also a strange heist subplot involving breaking into the Starlight Records building safe to steal back Jerrica's earrings that had Rio hijack his mother's car and hide Jerrica in the trunk, none of which was necessary when he's the number two person in the company and has access to go where ever he wants. When Lewis finds out, she puts the building on lockdown and demands they find Jem, never once looking in the Hollywood Hills mansion she provided Jerrica as her LA home base. And why was Lewis so intent on forcing Jerrica to be a solo act when Jem and her sisters as a band was clearly working?

Jem and the Holograms is a rock star story of "glamour, glitter, fashion, and fame" where there's no mention of drugs, no drinking, and the only restriction on Jerrica and her sisters, all of whom are minors, is a midnight curfew, which they freely break (and is already 3 hours later than the curfew Hugh Hefner imposes on his Playmates.) And yet, there are moments when Jem and the Holograms hits exactly the right notes, such as their first live performance when the electricity inexplicably cuts out in the venue and Jem energetically leads the audience into an acoustic number to close her set. (Each of her sets seem to consist of only one song.) Jem's music is decidedly pure "gets stuck in your head" modern pop in the Taylor Swift mode. But Jem's secret weapon is Aubrey Peeples herself, a bright, winning performer who endearingly conveys Jerrica's struggles against the artifice of her Jem persona, her "secret identity crisis." The message of Jem and the Holograms seems to be that the people who love Jem project themselves onto Jem, therefore, as Jem tells her fans, "You're all Jem." Which suits the current pop culture where all you need is a camera and an Internet connection to become your own superstar. But what of the Misfits, the evil version of Jem and the Holograms in the cartoon who try continually to destroy Jem? They're in there too, in a post-credits coda surprise setting up a sequel the filmmakers clearly hope for -- if Jem and the Holograms can make enough ca$h.