Set immediately after the destruction of the Death Star in Star Wars: Episode IV - A New Hope, Darth Vader thrillingly depicted the Dark Lord of the Sith's attempts to prove himself once more to the Emperor, who blamed him for the failure of the loss of the Death Star.

Gillen and Larroca gifted Vader with his own unforgettable supporting cast, including droids Triple-Zero and BeeTee One, hilariously homicidal versions of See Threepio and Artoo Deetoo, and best of all, the rogue archaeologist and droid technician Dr. Aphra, a twisted female version of Indiana Jones and the best new female character in the Star Wars canon (sorry, Rey). Vader also faced off against villainous challengers to his supremacy, including cybereticist Dr. Cylo and his cadre of creations, all of whom sought -- and failed -- to supplant Vader as the Emperor's apprentice.

Throughout their 25 issues and Darth Vader Annual #1, Gillen, Larroca, et al delivered a cinematic experience that truly felt like Star Wars at its best, depicting Vader as a calculating, fearsome, and indomitable force, while never compromising his terrifying mystique. Indeed, Darth Vader even gloriously enhanced Vader's mystique, allowing him to perform breathtaking acts using the Force even the movies never did. What's more, Gillen and Larroca sparingly but brilliantly used flashbacks to Vader's former life as Anakin Skywalker, allowing us to delve into his deepest regrets and his torment over his loss of Padme Amidala, which stoked the fires of his obsession to find Luke Skywalker, his newly discovered son.

The following are my favorite moments from Darth Vader, the Star Wars comic that truly proved nothing is impossible for the Force: 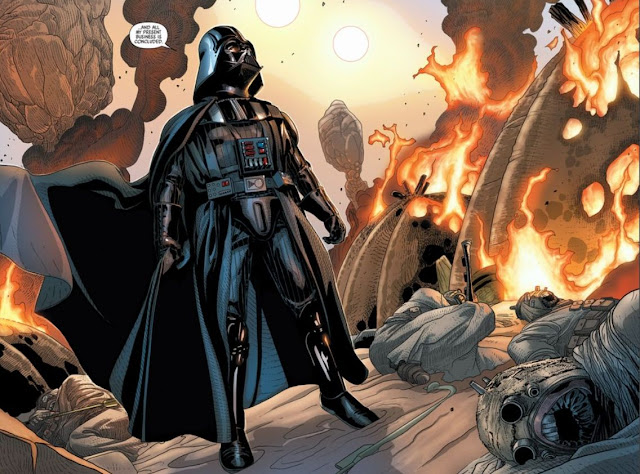 When Anakin Skywalker slaughtered the Tusken Raiders who kidnapped and killed his mother Shmi in Star Wars: Episode II - Attack of the Clones, he never set foot on Tattooine again. Anakin did not, but we learn in the comics Darth Vader came to Tattooine. His business was with Jabba the Hutt, where we learn in a retcon that Vader walked a path into Jabba's throne room that his son Luke Skywalker would unwittingly follow in Star Wars: Episode VI - Return of the Jedi. Vader's other business on Tattooine was to recruit bounty hunters, including Boba Fett, to find Luke Skywalker, but at this point in the story, Vader had yet to learn the name of the young rebel who destroyed the Death Star. While waiting to meet with the bounty hunters, Vader busied himself with an old habit and slaughtered even more Tusken Raiders. (Later, we learn in a coda to the entire Darth Vader series, the Tusken Raiders created a myth about Vader, worshiping him as a vengeful god.) 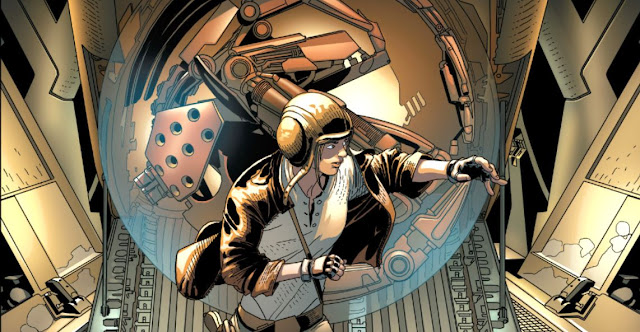 Our introduction to rogue archaeologst Doctor Aphra is delightfully familiar to everyone who loves Raiders of the Lost Ark. Aphra, Star Wars' villainous answer to Indiana Jones, successfully obtained the lost Triple Zero matrix, a relic of the Old Republic, which she programmed into the homicidal protocol droid Triple Zero. Of course, to get the matrix, Aphra had to escape deadly traps that were clever homages to Indiana Jones by the skin of her teeth, only to fall under the thrall of Darth Vader, her new "boss" whom she cheerfully aided, abetted, and betrayed throughout the series. The strange relationship between Vader and Aphra, where she loyally serves him out of the fear that he would murder her the second he no longer found her useful, was the oddly touching and compelling heart of Darth Vader. Doctor Aphra proved to be so charming, and popular, we have been gifted by an ongoing Doctor Aphra comic series by Marvel written by Gillen. Still, with Aphra now believed dead and hiding from Vader, we'll miss their unique exchanges. We've never seen anyone talk to Lord Vader this way before or since: 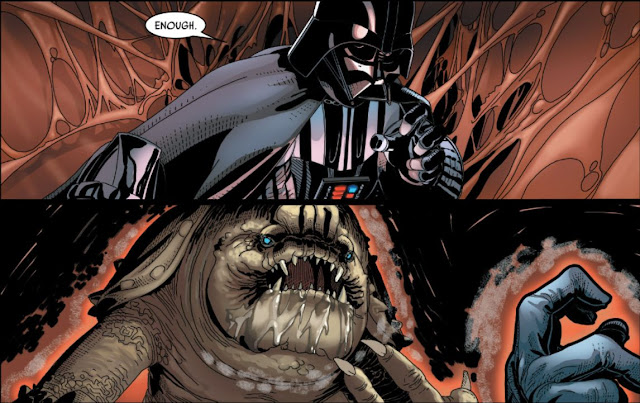 Once more, Luke Skywalker would be surprised to learn that a lot of stuff he famously did, his father did first, and better. That includes fighting a rancor. In this case, Vader faced a rancor cybernetically enhanced by Tulon Voidgazer, a brilliant, evil scientist and one of the would-be heir apparents to Vader. The cyberanimate rancor Vader battled had its pain receptors eliminated technologically. So, when the usual Force Chokes and Jedi/Sith tactic of amputating limbs by lightsaber didn't work, Vader brilliantly used the Force to hurl his lightsaber into the rancor's head, disabling the cybernetics. The rest was all too easy for the Dark Lord of the Sith, who finished the rancor off with the ol' lightsaber stab to the brain.

VADER DOWN, BUT NEVER OUT 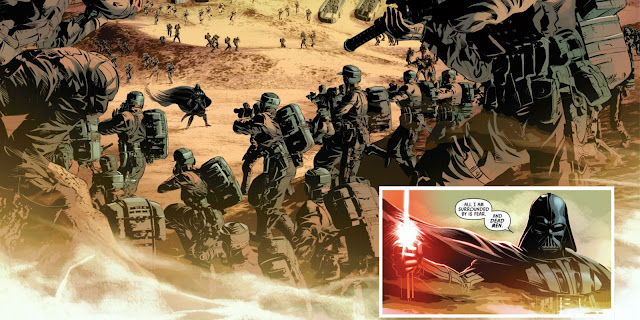 "All I am surrounded by is fear. And dead men." These were the chilling words Darth Vader uttered when surrounded by the collective force of the Rebel Alliance in the Vader Down crossover series. And Vader was right; it was the Rebellion that was in deep poo doo here. Tracking Luke Skywalker to a lost Jedi Temple on Vrogas Vas, Vader, alone, destroyed three squadrons of X-Wing Fighters before Luke Skywalker himself collided his X-Wing with Vader's TIE-Fighter, shooting the Dark Lord down. The Rebels then amassed in full force to kill Vader and... it didn't go so well for the Rebels, who were nearly all annihilated. Never has Vader's bad assery been on such thorough display. Vader Down also features hilarious confrontations between Vader's allies Dr. Aphra, BT-1, Triple Zero, and Wookiee bounty hunter Black Krrsantan vs. Luke Skywalker, Han Solo, Princess Leia, Chewbacca, C3P-0, and R2-D2, where we finally got to see Aphra fight Solo (whom she'd never heard of), and Chewbacca tear off Triple Zero's arm and beat him with it. Oh, and Vader battled another of Dr. Cylo's would be replacements for him, Karbin, a Mon Calamari trapped in the quadruple lightsaber-wielding cyborg body of General Grievous. That fight didn't go so well for Karbin.

VADER REBOOTS WITH THE FORCE

In the Darth Vader series' ultimate display of Vader's indomitable will and mastery of the Force, Vader's cybernetic body was deactivated by Dr. Cylo, who was revealed to be the robotics genius who created Vader's armored form. Cylo believed he achieved ultimate victory over Vader by simply shutting him off, but he sorely underestimated the amount of sheer hatred in Vader's heart. In a moving series of Star Wars: Episode III - Revenge of the Sith-inspired flashbacks and dream sequences, Gillen and Larroca depict Vader coping with a "Last Temptation of Anakin Skywalker" scenario, where Vader's memories of Obi-Wan and Padme plead with what's left of Anakin still within Vader, before Vader battles and overwhelms the last vestige of Anakin Skywalker. In the end, empowered by the Dark Side of the Force, Vader wills his cyborg body to reboot and finally executes Dr. Cylo with a lightsaber through the torso. It was an awe-inspiring moment once more proving that for Darth Vader, all is possible through the Force.

These are just a few of my favorite moments from Gillen and Larroca's spectacular Darth Vader run. A run absolutely worth reading in its entirety. Maybe some day, Disney will adapt this series into a Darth Vader feature film. Regardless, Darth Vader never compromised the Dark Lord's villainous machinations, motivations, and deeds. Or as Doctor Aphra correctly surmised: