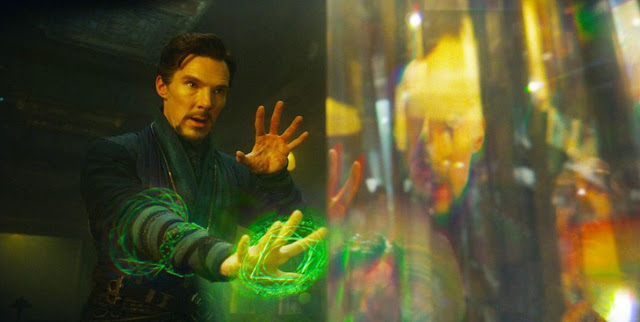 Doctor Strange sees the Marvel Studios machine working at full-bore, essaying its magical Sorcerer Supreme into movie theaters while busily checking off a Greatest Hits list of Things That Worked Before in Other Marvel Movies. As a Marvel origin story, Doctor Strange borrows wholesale from the previous magic of Iron Man and Thor. We're introduced to Dr. Stephen Strange (Benedict Cumberbatch, cheerily belaboring an American accent), world famous, mega-successful neurosurgeon. Like Tony Stark and Thor, Strange is at the top of his field, which is perhaps all the more remarkable with that surname. Wealthy people felt confident putting themselves in the hands of a surgeon named "Dr. Strange?" In the Marvel Universe, apparently so. Also like Tony Stark and Thor, before assuming the mantle of a hero, Strange is an arrogant snotball who needs to be taken down a peg. Strange does this to himself when he races his Lamborghini in the rain without paying attention to the road and drives himself off a cliff. He survives, but suffers permanent nerve damage to his hands, ending his surgical career. When neither begging lesser surgeons to treat him nor emotionally abusing his colleague and ex-lover Dr. Rachel McAdams cures his hands, Strange absconds to Nepal looking for a miracle.

In the magical compound of Kamar-Taj, Strange finds his salvation in the form of the Ancient One (Tilda Swinton), a magical Mr. Miyagi who shows Strange the secret of Marvel sorcery. Initially scoffing at the idea of magic and the multiverse, Strange nonetheless begins his mystical training at Kamar-Taj, rapidly gaining enough power to be able to stop Kaecillius (Mads Mikkelsen), who sports perhaps the least memorable and Kae-silliest of Marvel movie villain names. Kaecillius was the Ancient One's protege but turned to a new master, Dormammu, the nefarious lord of the Dark Dimension. Dormammu wants to swallow the entire universe and especially wants Earth because Earth rocks. Lots of great stuff on Earth, like Infinity Stones, one of which turns out to be Doctor Strange's magical amulet the Eye of Agamotto. Doctor Strange also receives a magical Cloak of Levitation, which chose him for some reason and stopped just short of sorting him into Gryffindor.

In Doctor Strange, Marvel Studios gets to do their version of Inception, with New York City bending its skyscrapers into itself in multiple dimensions as Doctor Strange and Mordo are chased by Kaecillus and his band of no-dialogue magical henchmen. Christopher Nolan now knows how the Wachowskis felt when everyone started stealing bullet-time after The Matrix. Cumberbatch is a game Doctor (don't call him Mister or Mister Doctor) Strange. He is never more interesting than when he first arrives at Kamar-Taj, a broken but still arrogant man, and the Ancient One literally yanks his astral form out of his body. Yet Doctor Strange's magical abilities come too quickly (the Ancient One even matter-of-factly points this out and then moves along) and with no cost. Doctor Strange doesn't for a moment dwell on the price one traditionally must pay for using magic. In Doctor Strange's universe, Strange just grows more and more powerful and acquires more and more stuff, like a Greenwich Village Sanctum to hang his cloak in. Together with Wong (Benedict Wong), the wry librarian of Kamar-Taj, and Mordo (Chiwetel Ejiofor), the Ancient One's loyal, intractable pupil, Strange battles Kaecillius in London, New York, and Hong Kong, before facing off with Dormammu in the Dark Dimension and pulling a magic trick on him right out of Groundhog Day and Edge of Tomorrow.

As Doctor Strange's villains, Mikkelsen doesn't break from the established Marvel movie tradition of underwhelming antagonists. Mikkelsen merely does a riff on Le Chiffre, the Bond villain he played in Casino Royale a decade ago, right down to having messed up eyes. Mikkelsen even cries a tear (but not of blood) when he explains what his beloved Dormammu is to Strange. Dormammu is quite a disappointment, just a talking face in outer space. Dormammu is sadly nothing more than a version of the reviled evil space cloud Parallax Green Lantern fought in his space dud of a movie, with just a smidge more personality. Mordo even turns evil at the end, like Sinestro arbitrarily did at the conclusion of Green Lantern. The Ancient One sends Doctor Strange on a magical journey across the multiversal dimensions, but Ant-Man went through a similar trip just two summers ago when he kept shrinking into infinity. To hammer home Doctor Strange's Marvel pedigree, a certain God of Thunder drops by in the expected end credits Easter egg to commiserate; both missed out on this year's wildly successful Captain America: Civil War and eagerly position their parts in the upcoming Avengers: Infinity War. More power to them. Doctor Strange is Marvel Studios casting their movie magic strictly by the book.
Posted by Back of the Head at 4:03 PM