Ghost in the Shell

GHOST IN THE SHELL 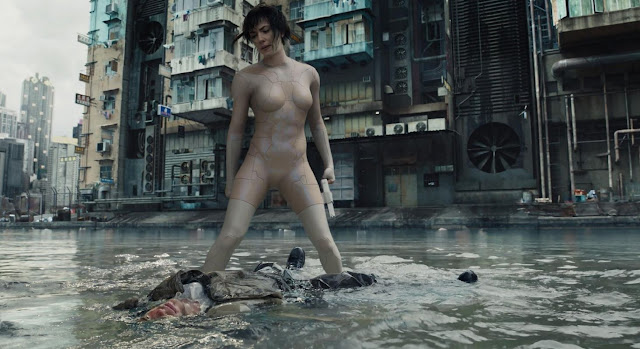 The following review is written from the perspective of someone who has never seen the Ghost in the Shell anime, and never will.

For me, personally, watching Ghost in the Shell was akin to the experience of visiting an art museum. There's lots of cool stuff to look at, and sure, I dig what I'm seeing, but I was still kinda bored. In Ghost in the Shell, Scarlett Johansson is the Major; her human brain was implanted into a robotic Shell to make her the perfect super soldier. We witness her creation, which is similar to how the Hosts are 3D printed on Westworld, by the Hanka Corporation - a vast and powerful conglomerate super duper into human-looking robots. The money men and science-y types in the Hanka Corporation must have watched Robocop for decades, decided they wanted their own, but technology has evolved so no more clunky tin can cops. It's the high-tech, day-glo, holographic Tokyo of the future! Their robots need to be sleek and hot.

Scarlett is the first successful cyborg prototype after 98 previous attempts crashed and burned. And boy, Hanka did a good job with Scarlett. She has an awesome cloaking ability, she can leap off tall buildings without fear or dying, and she can kill with efficiency. In the Terminator movies, dogs always bark at the Terminators because they can sense they're artificial. Dogs love Scarlett in Ghost in the Shell, though, and dogs always know who and what's good. Scarlett's not flawless, though. Her human mind and her soul, which is called her Ghost in this movie, seems to be glitching. She randomly remembers people and things that are overriding what turns out to be memory implants Hanka placed in her to keep her from asking too many questions. Other than that, Scarlett is a model soldier. Hanka loans her out to Section 9, a black ops strike force, and for one year, Scarlett exhibits an exemplary record of successful kills. Johansson, the actress, does cool things as a cyborg; she stomps around instead of walking normally and stands with a weird gait, as if she can't figure out how to be properly idle in her Shell. Plus, she's really beautiful. Don't take my word or your own eyes for it; every character in the movie makes sure to tell Scarlett how beautiful she is.

One of the characters who tells Scarlett how beautiful she is happens to be Michael Pitt, a fellow cyborg who mounts cyber attacks against the Hanka Corporation. What he's after isn't hard to suss out even though the movie wants us to think it's a big mystery: Pitt is obviously a previous model of Hanka cyborg whose Ghost rejected his Shell. Pitt is kind of interesting in that he has a deformed cyborg body and he speaks with the voice of a Japanese man speaking English through Stephen Hawking's vocal simulator. But that's as far as Pitt being interesting goes; once he gives up the goose about who and what he is, he's out of ideas. He is literally just relying on Scarlett, armed with the information he delivers on who and what she is, to go on the offensive and bring down Hanka for both of them. Pitt tries to lend a hand, but he turns out to be pretty ineffective in battle with a huge Hanka Spider Tank. Pitt's really good at whispering sweet nothings in Scarlett's ear, though. "No matter what, I'll be with you in your Ghost," he romantically coos at her. A real Romeo, this Pitt is.

Of course, the real bad guy in Ghost in the Shell isn't Pitt. No surprise, the Big Bad is the evil Hanka Corporation itself, personified by its CEO Peter Ferdinando. Once he loses control of Scarlett, he decides to scrap her and start over, completely forgetting they had 98 failed prior attempts before succeeding with Scarlett and they don't have a viable back up Ghost to put in a new Shell. But never mind, Ferdinando is all about the bottom line: murder. He kills the kindly technician who built Scarlett's Shell, Juliette Binoche, and he declares war on Scarlett and Section 9. Luckily, Section 9 is commanded by "Beat" Takeshi Kitano, a crusty old chief who likes to communicate telepathically and is no pushover with his .44 Magnum. The war between Hanka and Scarlett is exceptionally brief, and guess who comes out on top.

"Say something nice," Scarlett says in the movie. Okay, here goes: I kinda dug Ghost in the Shell. Except for The Thing I Didn't Dig So Much. There's a Big Twist in Ghost in the Shell, and here it is: Hanka Corporation has a real case of white envy and white privilege. Ferdinando is a white guy in Japan who prefers Caucasian cyborgs. The Ghosts provided for all the failed Shells - and the one successful one, Scarlett - came from kidnapped Japanese people. Scarlett herself was actually a Japanese runaway who was dragged out of her hovel and had her brain removed from her real body and placed into the Scarlett Johansson Shell. Pitt was her Japanese boyfriend and had his brain removed and placed the Michael Pitt Shell. This is pretty wack. One way to possibly deflect this unsavory creative decision: the Spider Tank they fight should have been able to talk and could have said, "What are you two complaining about? I was a white guy they turned into a Spider Tank!" Then it'd be all about perspective for Ghosts in the Shells.


Best line in #GhostintheShell: "You are not authorized to deep-dive a geisha!" How many Caucasians in Japan have been told THAT?
— John Orquiola (@BackoftheHead) March 31, 2017