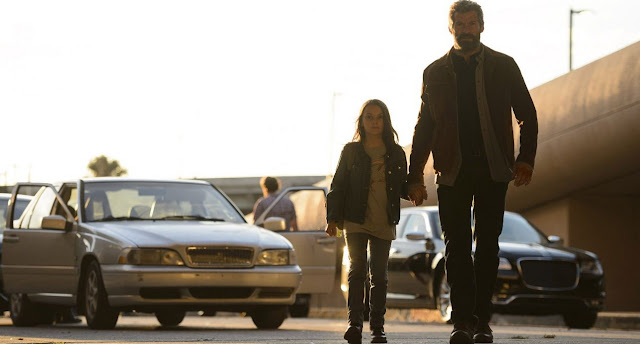 "Goddamn, Wolverine, it breaks my heart to see you like this!" one of the bad guys tells the Wolverine (Hugh Jackman) and we nod, sadly, in agreement. The tides of time and the perils of a life lived violently have not been kind to old man Logan. Not that the Wolverine has ever had it easy, but his present - our future - is bleak. In director James Mangold's gloriously savage Logan, the year is 2029 and mutant kind has been all but eradicated. We recall that Logan was instrumental in saving the future from becoming a post-apocalyptic wasteland of mutants and humans hunted by robot Sentinels in X-Men: Days of Future Past. In Logan, a different type of apocalypse (not this guy) occurred, decimating the mutants down to a scant, desperate handful. The X-Men are dead, perished in an "incident in Westchester" (New York, where the Xavier School of Gifted Youngsters was located). The Wolverine survived, as he does, and he spends his days wishing he hadn't.

Logan is a crumbling wreck. His vaunted mutant healing factor has been failing him for years; the result of the adamantium that coats his skeleton poisoning him from within. His claws don't always pop out properly, the scars of a million bullet holes and stabbings riddle his ripped, grizzled physique, and Logan lumbers around with a permanent limp. Eking out a living as a chauffeur (Logan is quite an advertisement for the 2024 Chrysler limousine - that thing can take a beating!) in a Texas border town, Logan, using his birth name James Howlett, drives rich assholes and drunken party girls around by night. By day, Old Man Logan medicates on alcohol and prescription pills, while also taking care of an even older man, Charles Xavier (Patrick Stewart). Charles, now in his 90's, is an even more crumbling wreck - the world's most powerful and dangerous mutant psychic mind dying from degenerative brain disease. Logan is aided by a long-suffering mutant named Caliban (Stephen Merchant), but neither seem grateful for the other's company.

When a desperate Mexican nurse and a silent little girl come begging to Logan, offering him $50,000 to drive them to North Dakota, Logan's dreary existence is upended. The nurse and the girl are being chased by heavily armed shock troops all equipped with cybernetic limbs. When the nurse is murdered, Logan and Charles - two dusty old bags of mutant bones - take the girl, Laura (Dafne Keen), on the lam. It's a road trip that has fatal consequences for just about everyone they encounter. Of course, Laura is a mutant, one of a crop grown in an illegal Mexican lab from the captured DNA of mutants past. And of course, Laura was grown from Logan's DNA. "She's your daughter, Logan," Xavier helpfully spells out. Designated X-23, Laura is also a Wolverine, with two claws in her hands and a claw in each foot. She's a feral, acrobatic, insanely dangerous killer. Just as when we first met Logan he found himself taking care of a young girl, Rogue (Anna Paquin), in the first X-Men movie so many moons ago, Logan brings us full circle. Once more, Logan has a young girl in his care, a reluctant father figure as she puts her tiny, claw-popping hand in his. And, because Logan is basically a disaster, Laura - full of surprises - ends up taking care of him.

For fans of the X-Men movies, Logan paints a depressing future for the mutants. Nothing works out for them, no matter how hard they tried, and it turns out Richard E. Grant of all people is the architect of the end (and the new, terrible beginning) of mutantkind. Logan has a little wink wink fun with the existence of X-Men comics; the "real life" world-saving superhero adventures of Professor X's students have been turned into four color entertainment for children. The greatest tragedy of all is poor Charles Xavier, suffering from a mutant Alzheimer's, lucid only when heavily medicated. His most impressive power in the original X-Men trilogy - how he could freeze time and everyone he wishes in their tracks - is now a terrible psychic attack to anyone in his vicinity when he has a seizure. And when lucid, Charles remembers what happened in Westchester, and why his X-Men are dead. It's also sad and unfortunate that no one in charge of the X-Men franchise will ever plot a noble demise for Charles Xavier. In Logan, the man who once dreamed of and taught his students to fight for mutant coexistence with humanity dies on the flatbed of a pickup after being stabbed through the heart by the third Wolverine in this story, X-24, a fully grown, mindless killer clone of the Wolverine. No eternal flame on Xavier's monument this time; the world's most powerful mutant mind is buried in an unmarked grave off the interstate somewhere in Oklahoma. Is this a better end for Professor X than how he was splattered into Xavier bits and pieces all over crazy Jean Grey's bedroom wall in X-Men: The Last Stand? Your mileage may vary.

In this promised one last ride, Jackman gives his most riveting performance as Logan. Jackman lays it all out there, a weary survivor eternally suffering, always in pain, loathe to give in to his better nature but he will anyway. The R-rating for Logan finally unleashes the primal, bloodthirsty Wolverine a ruthless killer whose primary weapons are six machete blades in his hands ought to be. (Stewart also indulges that R rating, unleashing an eyebrow-raising stream of F bombs we didn't know Professor X had in him.) Director Mangold goes for the jugular over and over, delivering a sprawling, satisfying, emotionally wrenching road trip headlong into doom that only occasionally stabs against the limits of creativity you can have with three Wolverines who growl, leap at, and horribly skewer and dismember people. Blatantly evoking classic Westerns like Shane, Mangold makes sure to strip Logan down to his trademark white tank top and jeans as he fights X-24, clad in a black tank top and jeans - an amusingly nice touch. As Laura, Dafne Keen is a tiny wunderkind. Bursting with magnetic charisma while saying nary a word, Keen's performance brings to mind Natalie Portman 20+ years ago in Leon: The Professional. Keen makes you believe there could be a future for an All-New Wolverine. Logan closes the book on Hugh Jackman's incarnation of the Wolverine in grand style. As a tribute to the enduring awesomeness of the Wolverine and of Hugh Jackman's 17 years and 9 films portraying the most popular mutant of all, Logan delivers a satisfyingly resonant end, and fittingly seals it with an X.