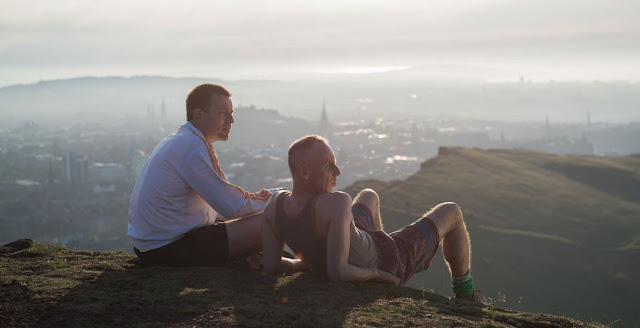 The first image we see in T2 Trainspotting is of a treadmill, and right away, director Danny Boyle slyly and deftly addresses our worst fear: a retread. Moments later, the treadmill's occupant, Mark Renton (Ewan McGregor) has a heart attack and is launched from the treadmill, collapsing in a heap on the floor. We're jolted, we're alarmed, we're uncomfortable, we laugh. This is Trainspotting. We're back, indeed.

20 years later, T2 Trainspotting reunites the original crew of Edinburgh drug-addicted hooligans. Improbably, they're all still alive: Renton, Sick Boy (Jonny Lee Miller), Spud (Ewen Bremner), and Begbie (Robert Carlyle). Sick Boy and Spud go by their Christian names now, Simon and Murphy. They're both still addicts; Simon's drug of choice is cocaine, while poor Murphy has never been able to shake heroin, which renders him unemployable and cost him a happy life with his wife and young son. They're both still hustlers, stalking the darker alleys of their yesteryear in this grander, cleaner, gentrified Edinburgh. As for that fearsome sociopath Begbie, he finally escapes prison after 20 years, little knowing the reason he went to prison in the first place has returned to Scotland. The joy of McGregor, Miller, Bremner, and Carlyle being reunited with Boyle behind the camera is palpable and electric.

Renton unceremoniously returns to the city he fled in 1996 after stealing 16,000 pounds from his mates. Spud, at least, is happy to see him, though this is after his initial bitterness at Renton for foiling his puke-filled suicide attempt. Sick Boy is less pleased to see Renton, but after coming to blows and declaring his intention to ruin Renton's life to his Bulgarian somewhat-girlfriend Veronika (Anjela Nedyalkova - a fantastic addition as the only woman in this movie), even she can see he's secretly over the moon Renton is back. "You two are clearly in love with each other," she tells them in Bulgarian. "It's uncomfortable for me to be in your presence." Of course, all they do is reminisce about old times and old football matches, and soon they're up to a scam: stealing and blackmailing to finance Sick Boy's dream of turning a dilapidated old pub into a bordello, pardon me, sauna. Meanwhile, Begbie has resumed his life of violent petty crime, until he learns Renton is in town in a callback to the Worst Toilet in Scotland in the original Trainspotting.

T2 Trainspotting is the rare sequel that walks in the same path as the original but not only moves the story forward, it recreates much of the same exhilaration while illuminating and enhancing the original film. As they look back on the friends and family they lost, the trouble they caused, the needles they shared, the scams they pulled, the music they heard, and the near misses of what might have been (Kelly MacDonald, now a successful barrister, is a welcome face to see again, for Renton and us), T2 Trainspotting makes us all complicit. In Sick Boy's words, we join Renton and we all become "tourists in our own youth." Through Renton and the boys falling into old patterns and getting into new trouble with the old gang, we remember that we were with them every step of the way, and we missed them as much as they missed each other.


Renton launches into a fantastic new version of his "Choose Life" monologue, not only telling us where it came from ("Choose Life" was an anti-drug epithet in the 1980s) but updating it in an inflammatory derision of Snapchat, Facebook, Twitter, and our morally empty social media-obsessed culture. And we realize that Renton did choose life, but he, Sick Boy, Spud, and Begbie have been terrible at life, and always have been. They're right back where they were, older, sadder, maybe wiser, but at least without heroin. The bright spot, fittingly, comes from Spud. "First, there's opportunity, then a betrayal..." writes Spud, after Veronika encourages him to put pen to paper and tell the stories of himself, Renton, Sick Boy, and Begbie. Sick Boy wonders who would want to read these stories, but we know better. "I've thought of a title," Spud's wife says, and we smile, knowingly. With style, wit, joy, and utter confidence, T2 Trainspotting takes us back and pulls us forward, kicking and screaming, until we feel the same rush as young Renton running from the police down the streets of Edinburgh and the same release the now-46 year old Renton feels, dancing alone in his childhood bedroom to Iggy Pop.
Posted by Back of the Head at 5:20 PM