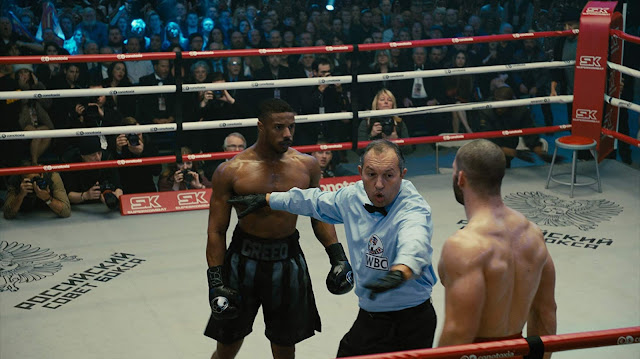 When Rocky Balboa (Sylvester Stallone) arrives in the new LA home of Adonis Creed (Michael B. Jordan) to train him in his rematch against the hulking Viktor Drago (Florian Munteanu), the following exchange occurs:

Rocky: "Your natural style just won't work with a guy that big."
Adonis: "What, you saying your's is better?"
Rocky: "I won, didn't I?"

He sure did. Creed II is not only a sequel to the 2015 film that reinvigorated the Rocky franchise, but it's also an amalgam of Rocky II, III, and IV. Co-written by Stallone, Creed II melds the major beats of those Rocky sequels all in one film: Three years since being publicly revealed as the son of the late Apollo Creed (Carl Weathers, whose ghost looms large in Adonis' life), Adonis becomes the heavyweight champion of the world, just like his old man and his mentor Rocky. This happens at the start of the film so that Creed II can segue into becoming a sequel to Rocky IV: halfway around the world, Ivan Drago (Dolph Lundgren, delivering a career-best performance) has been training his own son Viktor as a prizefighter. Drago is nursing 33 years of hurt after losing the pivotal fight to Rocky in 1985 - his wife Ludmilla (Brigitte Nielsen) left him and their young son, and his name has been scorned in his country for decades. The son of Apollo Creed vs the son of Ivan Drago is a marquee narrative, but Rocky has been through this already and wants no part of this sequel.

Without Rocky to train him, Adonis flies off the handle more than once and is utterly humiliated by Viktor. Only a technicality kept Drago from winning the title, but he hospitalizes Adonis and shatters his spirit, just when he and his pop star fiancee Bianca (Tessa Thompson) are about to have a baby (not unlike how Rocky and Adrian had their son in Rocky II). Without his self-confidence, Adonis flails around and lashes out in anger, not unlike how Rocky lost the "Eye of the Tiger" after Mickey (Burgess Meredith) died and he was humiliated by Clubber Lang (Mr. T) in Rocky III. But the Dragos won't go away and the rematch looms. Finally, Rocky returns to Adonis' life and trains him - in the California desert this time instead of Siberia - for Adonis' rematch with Viktor in Russia. The Rocky IV redux goes a little differently; though Adonis does prevail, a neat detail is how Rocky adhering to Apollo's wishes and not stopping the fight comes full-circle when Ivan is forced to make the same choice to save his son in the ring.

Creed II is filled with thrilling, insightful character work and moments of extraordinary power. Finally, Adonis emerges as his own man - not the charming gabber Apollo was but not a carbon copy of Rocky in the ring either - and the film thoroughly explores Adonis' psyche, a challenge Jordan rises to. The best characters, however, are the Dragos, and we wish there was just a bit more of them in the film, which does delve into how Ivan raised Viktor in the shadow of his greatest failure. For Rocky IV fans, the scene where Ivan appears in Rocky's restaurant is like the Rocky version of the DeNiro/Pacino diner scene in Heat. Creed II also wraps up all of the franchise's lingering plot threads; nearly every living character makes an appearance and Rocky not only beats the cancer he was diagnosed with in the first Creed, but he reunites with his estranged son Robert (Milo Ventimiglia) and meets his young grandson Logan.

The biggest hit against Creed II is its length and pacing. As remarkable as the moments are, the first half of the picture is glacially paced, and the final film (which has a strangely muted sound design) feels listless until the third act and the final fight with Viktor. It's also a shame that Adonis isn't the great communicator his father was, and that after two Creed films, he still doesn't have his own iconic theme music, relying instead on Rocky's familiar score to punch up the emotions. But again, there are aspects of Creed II that are jaw-droppingly good, such as Adonis' ring entrance during his rematch with Viktor where Bianca defiantly sings him into the ring in front of a partisan Russian crowd.

When Adonis' baby is born, Rocky has a brief chat with Apollo's widow Mary Anne. Rocky tells her, "I'm gonna do what I can", to which she replies, "Your being here is enough." This exchange is like a meta-commentary for Stallone's continued involvement in the whole Rocky/Creed franchise. Now that nearly every sequel has been homaged, the question is where does Creed go from here? (Hopefully not copying Rocky V.) Rocky remains a pivotal part of the Creed films - he's still arguably the most important character - but by the end of Creed II we begin to see that maybe there can be one more round without Rocky Balboa in Adonis' corner. Hopefully, Rocky and Stallone go the distance with any further sequels, but should Adonis ultimately lose Rocky, Creed II gives the impression the franchise could withstand even that potential knockout blow and keep moving forward.
Posted by Back of the Head at 1:44 PM