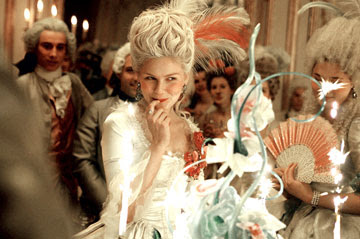 
Ever been trapped following your girlfriend and her girlfriends around the mall all day while they shopped and giggled and gossiped, leaving you to carry the bags? Marie Antoinette is a lot like that for the heterosexual male moviegoer. This is Sofia Coppola's Girlie World, circa 1770's France, an age where girls acted like girls and men were also girls. I like girls and I liked the movie, but only up to a point. By the end I started fantasizing about Arnold or Stallone or Bruce Willis bursting into the palace at Versailles and shooting everyone dead with the loudest, bloodyingest machine guns imaginable. Even Tom Cruise rappelling into the palace in one of his latex masks would have been sweet. Some violence - any violence - anything at all resembling machismo would have been pleasant. I was even looking forward to the famous "off with their heads!" moment that never actually came.

No one gets their asses kicked in Girlie World France, but there wasn't a single person there who didn't deserve at least a low blow or a bitch slap. Am I glad I wasn't alive back then! I'd have killed as many people as I could and then myself, in that order, just to get the hell out of there. But I should also point out for the fellas who get dragged to see this by their girls, it's not all bad. Kirsten Dunst gets repeatedly undressed by her courtesans. Nice.

Sofia Coppola has gentle, elegant directing style, and she has really good taste in 1980's New Wave music. Unfortunately, she felt no great urgency in telling the story of Marie Antoinette, a young Austrian princess arranged to marry the Dauphin Louis XVI and become Queen of France, as a narrative. The key events of Marie Antoinette's life are depicted in fitful, almost after-the-fact moments. The focus of the movie is the audience being immersed in the decadent world of French royalty in Versailles as Marie Antoinette herself is. Coppola is much, much more interested in the over-the-top opulence of the food, the clothes, the art, furnishings, and mind-boggling wealth of the time. Marie Antoinette almost feels like a Terrence Malick picture, with long, loving beauty shots of food and the grounds of Versailles, only lacking Malick's lyricism.

Coppola eschews the Hollywood Fish Out Of Water formula of storytelling; Marie Antoinette only fleetingly rebels against the stifiling protocol and endless boredom of her world (the best moment is when she leads applause at an opera, which we're told is frowned upon). Coppola and Kirsten Dunst's Marie is no rebel or radical out to change the system; she's just a rich girl who wanted to have some fun once in a while. Coppola is extremely effective in depicting the wasteful lives of the wealthy rulers of France: A whoring King Louis XV, his fey son Louis XVI, and all the chattering, gossiping, insufferable members of the royal court. Coppola is at her best when staging and blocking shots of the movement and elegance of the characters set to her unique musical choices. But there are no strong performances; when the actors would speak, they mostly sounded like actors from a Laguna Beach school play as directed by Paris Hilton.

Gradually, the decadence of the movie becomes deadening. Midway though, I'd had enough of food, clothes, and beauty shots of the palace. The characters in the movie hadn't; it was all they knew and they didn't much care what was going on beyond the manicured palace grounds. There was no one interesting, no one to root for. The primary conflict in the movie is whether or not Marie can get Louis to sleep with her, after years of angelic patience and failed attempts, so that she can produce an heir and solidify both her position as queen and the Franco-Austrian alliance. Despite looking, sounding, and acting gay, we're pointedly told Louis XVI is not in fact gay, he just somehow can't get it up for Marie. I see... Eventually Louis fathers three children by her, though we never see Marie Antoinette pregnant. For that matter, Kirsten Dunst remains perfectly thin for the entire movie despite consuming thousands of calories a day. I ate a donut and drank coffee every morning this week and felt like my ass was expanding. Somehow, Marie Antoinette can burn all those calories by flitting about her palace and laying about her luxurious satin sheets.

It's clear what Sofia Coppola was trying to say: these were rich, spoiled kids who had no business and no interest in running the country. They were the Laguna Beach castmembers of their day and their conversations were about as deep, interesting and informed. Girls are gonna always just want to have fun. The "men" in the movie are all dandy fops.

Marie Antoinette is genuinely baffled why she's loathed by the people of France. Neither she nor Louie had any real compehension of or interest in the bloody and violent Revolution happening in their midst until the angry mob marched right up to their palace doors and literally demanded their heads. The final shot of the movie is not the famous beheading of the king and queen but of a room of the palace completely trashed. The message is clear: The party's over.

On the way out of Marie Antoinette, I overheard a father explain to his young daughter why the people of France were mad at Marie Antoinette: "She was a bad queen. She didn't care about France." That seems to be accurate, but as a bad queen she was a product of a bad court. The people of France did the right thing. All those worthless people had to go.
Posted by Back of the Head at 11:25 PM