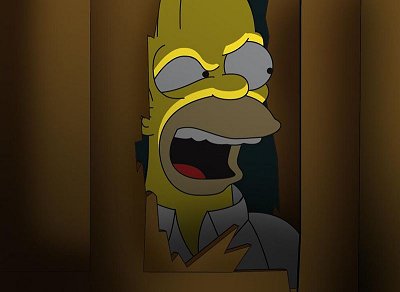 No TV And No Beer Make Homer Something Something
This weekend at the Red Bank International Film Festival, we got to watch (a DVD of) The Shining on the big screen.  I don't remember when the last time I saw The Shining was - it'd been over a decade at least - but damn if I don't remember The Simpsons parody of it ("The Shinning") way more.
Probably the most disappointing part of The Shining was the ending, where there was no mention of "television's warm glowing warming glow."  Another instance where "The Shinning" is superior is in the motivation of why Homer went insane and tried to kill his family: Mr. Burns made sure there was no TV and no beer in the hotel.  You can't help but be a little confused as to why Jack Nicholson went insane.  Was it the ghosts?  His alcoholism?  Was he reincarnated from a murderer in 1921?  With Homer, it's very clear.
Homer:  "No TV and no beer make Homer something something"
Marge:  "Go crazy?"
Homer:  "Don't mind if I do!"
Hell, if I was stuck for five months with no TV and no beer, I'd make friends with an ax collection too.  I'd kill you.  I'd kill all of you!  (Did I say five months?  Five minutes might break me.)
A couple of observations from The Shining:
Jack was really quite a fuck up.  The ghosts really bet on the wrong horse there.  All he had to do was shove an ax into his mousey wife and his spaced out son.  That's it.  Just kill two people.  He could have just gone up to them and said, "Can I ax you something?" and then axed them.  He lived in the same apartment with them.  He could have easily parted their skulls with the ax as they slept.  They wouldn't have seen it coming.  But no, he totally, completely blew it.  His incompetence reflected badly on the ghosts, all of whom killed their families without any trouble.
The poor black guy.  He's sitting in bed in Miami safe and sound with his nudie paintings of black women with huge 'fros hanging over his bed, not a care in the world, then he gets the Shining from the kid.  He puts on a dapper zoot suit, flies all the way out to Colorado, drives five hours in a blizzard, a few more hours on a snow truck to the hotel, and for what?  An ax in the chest.  Him, Jack can kill.  But if the black guy'd never shown up at all, Jack would have been the only casualty of his attempted killing spree.
When Shelley Duvall finds Jack's manuscript, hundreds of pages with only "All work and no play makes Jack a dull boy," and he sneaks up on her and asks her what she thinks, there's really only one response:
"Jack, you're a really shitty writer."
Can't imagine why anyone would stay at the Overlook Hotel after all the killings that go on there.  But you know, I'd still rather stay there than at a Hilton
Posted by Back of the Head at 4:44 PM