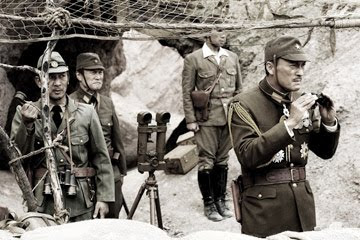 Remember the movie The Devil's Own?  No, of course you don't, hardly anyone saw it. The Devil's Own was a 1997 Harrison Ford and Brad Pitt picture where Ford played an Irish American cop and Pitt was an Irish gangster.  The key line that all the critics disputed was "This isn't an American story, it's an Irish one."  Letters From Iwo Jima is just like that.  It's not a Japanese story, it's an American one.  Despite an all-Japanese cast and being spoken in Japanese, the sensibility was purely American. Not one of the "heroic" Japanese characters at war with the United States killed a single American in the movie.  In fact, all the main characters were positively in love with Americans.

I read the James Bradley book Flags of our Fathers and did some independent reading about Iwo Jima.  According to the book, the Japanese army was so brainwashed by the Imperial Command that they were fanatical about defending the island.  They were willing to die to keep it from America .Though they were no doubt scared shitless of the massacre about to land on their black sand island, the Japanese army did their jobs believing it was the right thing to do and, more importantly, because it's what the Emperor commanded.

Those 20,000 Japanese held the island for 40 days, killed 7000 Marines and inflicted another 21,000 casualties. What they achieved against overwhelming odds, even in losing and dying, was staggering.  The Japanese defenders gave the Marines one of their bloodiest, costliest battles in their history. Letters takes all that achievement away from the Japanese. Good, you say. Because they were the Enemy. Sure, except Letters From Iwo Jima is supposed to be from their point of view.

Letters is basically a 3 hour sepia-toned version of the Us Weekly column "They're just like Us!"  (Look, Jennifer Garner shops at the Gap!  Lindsay Lohan buys laundry detergent!  They're just like Us!)  Look, the "good" Japanese love American-made guns and don't want to shoot a dog!  They're just like us! It would have been highly unlikely the real Japanese soldiers would have tenderly cared for a captured American POW and had a pleasant chat with him about Mary Pickford. No, more likely, they would have cut his dick off, shoved it in his mouth, chopped off his limbs and decapitiated him. Because that's what the Japanese did to American Marines. Look it up.

There was little sense of time or stategy in the movie. It took 6 days for the Marines to claim Mount Suribachi and take the famous photo of the Marines raising the flag on its summit.  Letters would have you believe the Japanese soliders gave it up in ten minutes and then bumbled around the caves like Stooges.  The miles of tunnels they dug and the combat strategy they employed was devastating to the Marines, especially in the opening days of the battle.  But in the movie, there was no sense that the Japanese knew what the fuck they were doing.  They were all depicted as panicky idiots in the wake of the mighty Marine invasion.

The only Japanese soldier who was actually authentic was the captain who was yelling at the "heroes" to dig faster in the beginning and then proudly commited suicide when the Americans were winning.  The "hero" at the end smiling because he was taken in as a POW and gets to hang with the Americans he loves so much?  Bullshit!  In the values of his culture he's a fucking coward.  He disgraced his Emperor, he disgraced his ancestors, he disgraced his wife and child, who were probably executed.  What the fuck was he so happy about?  If he had any honor he should have killed himself. But he doesn't think like a Japanese because he isn't one.  He's an American character disguised as Japanese.  It's all a crock.

Ken Watanabe was the only good thing in the movie; General Kuribayashi really did respect the United States and believe the island was going to eventually fall.  That I believed.  Everything else was whitewashed garbage.


January 23, 2007
Letters From Iwo Jima got Academy Award nominations this morning for Best Picture, Best Director, and Best Original Screenplay (I'll say it was "original") among others. Even with virtually every critic and now the Academy of Motion Picture Arts and Sciences hailing Letters, I'm gonna continue to walk against the wind and claim it's not very good.
Posted by Back of the Head at 10:46 AM