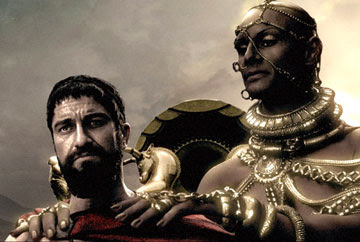 300 is exactly what it says it is. It's a visual feast and the action is entertainingly absurd.  It's not deep or complex and never claims to be. I liked 300 more than Sin City because it told a better story and wasn't as preoccupied with how cool it was. I don't think any red blooded man in the theatre watching 300 didn't fantasize in the moment about being as bad ass as a Spartan. Or at least having their pecs and eight pack. If those long-dead Spartans could see how 300 portrays them - noble, courageous, half-mad, and unstoppable in battle - they'd no doubt be pleased. Of course, a real Spartan has no time for movies, he'd be too busy killing anyone who looks at him cock-eyed.

A couple of little things in 300 struck me as odd or out of place. The line "Tonight, we dine in Hell!" for instance. Hades, you mean. What the hell is 'hell' to an ancient Greek? The last shot of the movie also left me scratching my head. After the 300 are dead a year and David Wenham gives his closing speech to rouse his army against Xerxes' hordes, he leads a charge to close the picture. It's an unusual battle strategy when Leonidas explained earlier to the misshapen traitor who wanted to be a Spartan that the secret to Spartan victory is an impenetrable defensive phalanx. But whatever. When Leonidas threw his spear and made Xerxes's cheek bleed, in my head I heard the black guy in Rocky IV: "YOU SEE? YOU SEE? HE'S NOT A MACHINE! HE'S A MAN!" Or not a god, he should say. Leonidas should have said that as he was lying there with all the arrows in him.

WWE Films puts out a couple of movies a year now starring their wrestlers but 300 is the closest I've seen a motion picture come to what watching WWE is like. As I write this, I'm watching Friday Night Smackdown and the similarities couldn't be more obvious. Over the top action? Bloody ultraviolence? Check and check. Ripped and jacked nearly naked men? Check. Dialogue yelled at the top of their lungs? Check. Straightforward storytelling with clear cut good and evil? Check. All problems solved by fighting? Check. Freaks of all sizes and shapes? Check. Strong, sexy women being demeaned with violent comeuppance to the villains who mistreat them? Check. Some homoeroticism? (See above photo). Oh my, yes, that's a check. The Immortals even busted out a dropkick and their big muscle monster hit a chokeslam. Warner Bros. could have put this on pay per view and charged $45 for it, but they're no Vince McMahon. Then again, Leonidas never did kiss Xerxes' bare ass.
Posted by Back of the Head at 11:32 PM