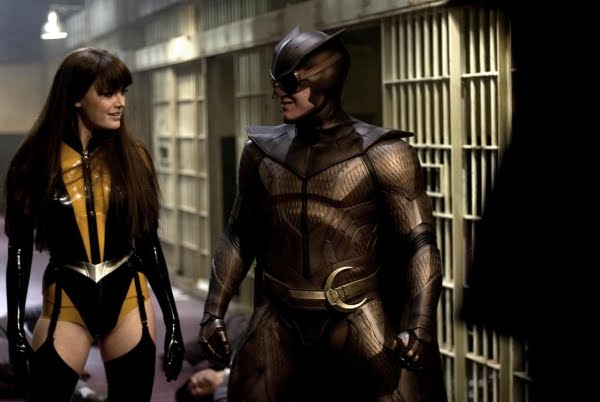 You really shouldn't read this unless you've seen Watchmen.

I thought I wrote a pretty decent Watchmen review. I tried to be fair and touch on what I felt were the strengths and weaknesses of the movie. Somewhere along the way I neglected to mention whether or not I liked Watchmen. Well, considering that Watchmen has dominated my thoughts and many of my conversations this past weekend, and considering I just got back from seeing it for a third time (I'm pretty sure I have one more IMAX viewing in me before I finally, mercifully put Watchmen aside -- until the director's cut in July), I think I can safely say I love Watchmen. It's hard to put into words why I had trouble coming to that conclusion after the first, non-IMAX viewing. 20 years of waiting for this movie, knowing that graphic novel so well, the dueling expectations and dread, made sorting through what's there, what's missing, what was changed, what was improved, surprisingly difficult.

I'm genuinely impressed with the way Zack Snyder handled the source material. I honestly don't know how else it could have been adapted. Could someone else have done it better, or worse? Who knows and who cares. What's there is a remarkable achievement for something that until three days ago I still felt shouldn't have been attempted. Snyder succeeded in filming "the unfilmmable." Fortune favored the bold. I can also say that I don't think Zack Snyder worsened anything about "Watchmen", which is an amazing feat in itself. "You never did anything wrong by me."

I'm still awed by how well the musical choices fit into Watchmen. I've read the inevitable complaints online, that some found the pop songs distracting or off-putting. To each his own. I'm still surprised by how right it felt to me, and how savvy the song choices were. I already mentioned how much I liked "99 Luftballons" and "Everybody Wants to Rule the World" in my review. Those were the two songs that really sold the 1985 time period. Both songs address nuclear war and the Cold War. "99 Luftballons" lead into the first Laurie/Dan dinner, where Dan told the Captain Carnage story, which was the first time in the movie anyone genuinely smiled, laughed, and had a moment of levity. Then Laurie brings up the impending nuclear war, which was foreshadowed by the song. If you look at the lyrics of "Everybody Wants to Rule the World" it's such an ideal song to describe Adrian Veidt. And yet the lyrics are never heard; a muzak version is what's playing as Veidt narrates his life story to Lee Iacocca. It's funny too how strongly I reacted to both songs when they're actually used so fleetingly in the movie. "The Times They Are A-Changin'", "The Sound of Silence" and "All Along the Watchtower" were used much more prevalently.

In my review, I seem to have gone out of my way not to overpraise Jackie Earle Haley's performance as Rorschach. Not to say Haley wasn't excellent -- he arguably gave the best performance of the actors -- but I felt (correctly, it turned out) that most fanboys would fixate on him and it would be like the X-Men movies all over again where 95% of the adulation went to Wolverine. Unlike the three X-Men movies, Rorschach (thankfully) does not dominate Watchmen. Now, if I were still a teenager and I watched Watchmen, I'm sure I'd be all about Rorschach as well. The first couple of times I read "Watchmen" as a teenager, it was all about Rorschach for me. Rorschach Rorschach Rorschach. "Hurm." "Never compromise, never surrender. Even in the face of Armageddon." "Hurm" again. I'm glad that enough time has passed where I no longer regard the angry, ultraviolent, sociopathic vigilante as particularly cool. I sure don't idealize him. I see Rorschach for what he is, and what he is ain't "cool". (Still, tell that to the disenfranchised teenage boys, and the 40 year old men who never grew up, applauding Rorschach's every word and deed in the theater.)

It's Dan Dreiberg who spoke to me the most in Watchmen. It's funny because all the times I've read the graphic novel, Nite-Owl never particularly registered for me. But the way Patrick Wilson plays him, and the way he's presented in the movie, I see Nite-Owl in a new light. Dan Dreiberg is my new hero, my favorite Watchman. He's the best guy in the movie. A guy in his mid-30's, a good guy, smart, tries to do the right thing, loves gadgets, had dreams but put them aside, then rediscovers how much he needs those dreams to self-actualize. And he gets the girl in the end. Dan Dreiberg is the shit. I fucking love Nite-Owl. I also really liked the subtext in the final scene with Dan and Laurie, after Sally leaves the room.

Laurie: "How are things down there?"
Dan: "I think I got everything working."

Then he goes on about the Owlship's systems but that's not what Laurie was referring to. Dan Dreiberg needs Nite-Owl to be a man, but he is a man again.

Adrian Veidt also seems to be getting a bit of the shaft, so to speak. I really like what Matthew Goode did with the character. Veidt held together the final act and the work Goode did to present him was rather excellent. When you think about it, Goode's job was so thankless. He basically spends the entire movie, specifically the Antarctic sequences, doling out exposition. And yet, he really sells Veidt, both as a physical threat to Rorschach, Nite-Owl and Silk Spectre, and as a highly intelligent, warped world savior. The movie didn't quite explain how it was Veidt was so physically superior in fighting the other Watchmen. He was always just referred to as the World's Smartest Man, whereas the comic also explained that Ozymandias was the best fighter in the world. All the audience had to go by to explain Veidt's fighting prowess was the way he murdered the Comedian and the form and style with which he fought the other Watchmen. The German accent (which I believe is meant to be Veidt's natural accent that he suppresses when talking to the press or Lee Iacocca) got some complaints, but it was a particular choice that added a very interesting element to Veidt.

Also interesting was how the movie tackled the subject of Veidt's sexuality, which was never really brought up in the graphic novel to my knowledge. First, he's wearing the Batman Forever analog suit with nipples. In our first glimpse of Ozymandias we see him standing outside Studio 54 with the Village People. Then he tells Iacocca the only person he ever felt kinship with was Alexander the Great. When Nite-Owl and Rorschach break into his office, Rorschach has a line about why Veidt is missing and what "proclivities" he would have that would keep him from home at 3am (although Rorschach thinks everyone's a homo). Finally, when Nite-Owl opens his computer files, there's a folder labeled "Boys." Hmm, I think I understand what Snyder is getting at.

I really liked the choice to have Dreiberg go to Veidt's office to warn him about the mask killer. Rorschach does it in the graphic novel ("I have business with a better class of person") but having Dreiberg speak to Veidt opened up an avenue to show that Veidt and Dreiberg were friends. They're the two Watchmen who would have the most in common. Veidt was genuinely touched that Dan warned him his life "is in danger". It also makes a great deal of sense that the Watchmen have been sharing technology for years. Veidt and Manhattan are shown working together, which lead to Veidt's plot to save the world, but where did the Owlship come from? Sure, Dan has money he inherited and it's likely he designed his suit and ship, but it's highly unlikely he built it himself in his basement like the graphic novel implies. It only makes sense that Veidt must have provided the means for Dreiberg to have his wonderful toys.

During the scene when Laurie broke up with Dr. Manhattan, it's amusing to see Veidt on the monitor screen watching the whole thing unfold. Such a subtle thing that doesn't even register when you're first watching the scene because of the characters in the foreground, but there Adrian is, observing his plan to disconnect Dr. Manhattan with his last link to humanity unfold right on schedule. The movie is filled with little nuances like that. Upon the first viewing, during the scene when the Comedian walks out of the Watchmen's meeting and burns Ozymandias's map, I didn't notice that Comedian's zippo lighter had Sally Jupiter emblazoned on it. Many of his personal items are Silk Spectre I merchandise.

Of little nitpicks I missed in the movie that were in the graphic novel, there's one particular panel I always loved: When the SWAT team goes after Rorschach in Moloch's apartment, there's a full middle panel of him shooting his grappling gun into a cop's chest. It's a brutal image that's surprisingly missing from the wanton brutality in the movie. Rorschach still does it to a cop in the movie but it happens so fast it barely registered. Strange, because if there was a moment tailor-made for a Zack Snyder super-slo-mo, freeze frame act of ultraviolence, I would have thought that shot was a gimme. Another random little thing I missed was after Silk Spectre shot Ozymandias. Right after he shows he caught the bullet and then kicks her in the gut, Laurie says "Shit!" in the comic. She said nothing in the movie, just took the foot right to the babymaker.

Speaking of beating up a Silk Spectre, the attemped rape scene by the Comedian in 1940 is so much more jarring to see in the movie. I thought it was graphic enough in the novel, but it's so much more vicious and disturbing the way Snyder presents it. I do question how come Sally Jupiter didn't resist after Comedian bent her over the table. Certainly, she was badly beaten and probably had a concussion, but still, she was not resisting. Did Sally somehow think she deserved to be raped? Did she secretly want it from him? Was the violence done to her a turn on for her?  Maybe.  The subtext of "Watchmen" always spoke of the kinkiness of its superheroes. Certainly, Sally Jupiter is very complicated, torn, and guilt-ridden, which the movie and Carla Gugino only had so much time to show.

And then there's all the Nixon in the movie. In between all the Watchmen, I found time to watch the latest Futurama DVD, and of course, Nixon has long been President of Earth in the series. Then I remembered that Frost/Nixon was out just a few months ago. How strange that in 2009, there is so much media out there where Richard M. Nixon is still our President. Even with Barack Obama in the White House, somehow Nixon is President in our dreams.

I think that's about it, finally. More than enough hardcore nerding out for one weekend. I can't think of anything else about Watchmen I want to talk about.

It's been a hell of super nerdy weekend, living under the shadow of Manhattan.
Posted by Back of the Head at 3:20 PM