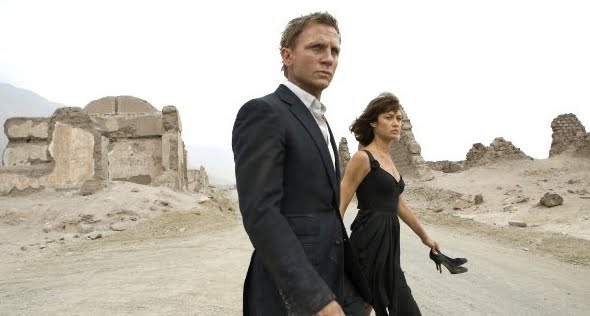 
The frustration I feel with James Bond these days is different from the frustration M feels. M bemoans how uncontrollable Daniel Craig's James Bond is, although in Bond's defense, 1) she gave him that license to kill and 2) everyone he executes tries to kill him first.

My trouble with Bond is that for the second movie in a row, the filmmakers can't quite decide who James Bond is. They know who and what he was, as documented by the 20 prior "official" Bond movies before Craig stepped into the role. These days, the filmmakers behind James Bond come off more or less ashamed of his legacy. Quantum of Solace pays cursory lip service to Bond's traditions: there are the obligatory sexy girls, vodka martinis, an Aston Martin, globe trotting, promiscuous sex. Yet Craig's James Bond is dismissive of all of it, as if it's a bother to him to be James Bond. Is it too much to ask for Craig's Bond to actually enjoy being Bond? No, it isn't.

Bond's filmmakers continue to be envious of another man who shares the same initials: Jason Bourne. The Bourne trilogy haunts Quantum of Solace the way the ghost of Vesper Lynd (Eva Green, the Best Bond Girl Ever) haunts Bond himself. Bond is driven by the betrayal and death of Vesper in a similar way to how Jason Bourne was driven by the murder of his love Marie in his second and third Bournes. There's even a coda in a Russian apartment echoing The Bourne Supremacy, only instead of Bourne coming to apologize to the daughter of his victims, Bond has come to confront Vesper's mysterious boyfriend.

Marc Forster directs the many, many bludgeoning action sequences as if he's taking marching orders directly from Bourne's maestro Paul Greengrass, but with a difference -- Greengrass knows how to use the shaky cam and edit his action so that it's coherent and thrilling. Forster's shaky cam seizures and vibrates but the action is bewildering to follow. There wasn't a single action sequence in Quantum of Solace where I wasn't wondering what the fuck was going on. Forster, who's an excellent dramatic director, fared much better in the quieter moments of character interaction and inevitable exposition.

In Solace, Bond is hot on the heels of Quantum, the secret organization of interchangable thin-lipped European men he ran afoul of in Casino Royale. Quantum is the new millennium's version of SPECTRE, only without the secret volcano headquarters, army of uniformed thugs, and mysterious bald leader stroking a cat. Quantum does however share SPECTRE's prediliction for secret decoder rings. Quantum isn't as much fun as SPECTRE, although I suppose they are more "realistic".

Once again, the main villain is hardly memorable. Dominic Greene, thin-lipped European environmentalist, is just a swarthy guy who wanted to stockpile Bolivia's water and sell it back to them at a premium -- a diabolical yawner of a master plan. Greene is a pretty damn uninteresting villain. He doesn't even have a visual quirk like Le Chiffre, who cried tears of blood in Casino Royale, and Le Chiffre was pretty boring himself. Bond's method of executing Greene, leaving him to die in the desert with a can of oil to drink, was novel, except I didn't like how Greene spilled his guts to Bond about Quantum off screen. What, we're not privy to the secrets of Quantum? The audience knew everything about SPECTRE. Thanks for holding out on us, James.

The sequence I enjoyed most in Quantum of Solace was Bond crashing the opera in Austria which was a cover for a secret bluetooth meeting between Dominic Greene and some other Quantum higher-ups. (Although Bond's ridiculous method of spying on his targets is standing out in the open so everyone can see him spying. Clever, James.)  I liked Bond stealing some guy's tuxedo (which turned out to be perfectly tailored in his size) and gift bag, then mocking the Quantumites on the air. I especially appreciated Bond throwing one of the Quantum goons off the roof by slapping his hand off his tie; a lovely homage to Roger Moore's Bond killing a henchman in Cairo in The Spy Who Loved Me. Bond even made a Cairo reference before he left for Italy that I quite enjoyed.

Speaking of homages to past Bond films, no one could miss the callback to Goldfinger. This time, Bond's innocent one night stand Fields (IMDB informs me her name is Strawberry Fields, which Quantum of Solace went out of its way to avoid saying; again foolishly ashamed of Bond's legacy) is drowned in oil and left on Bond's bed the way Jill Masterson was given the worst kind of golden shower. Before that tragedy, I enjoyed when Bond scoffed at the hovel Fields booked them to stay in and instead checked them into the best hotel in Bolivia. ("We're teachers who just won the lottery.") Craig was finally behaving like James Bond, although the moment was fleeting and the sex was only implied.

I was rather taken with Fields (Gemma Arterton) in the brief time we knew her, far more than I was with the main Bond Girl this time around, Camille (Olga Kurylenko). Camille was on a similar revenge trip as Bond was, looking to kill Bolivia's rapiest general. Kurylenko is certainly beautiful, but Camille just didn't have anything close to the impact Eva Green did as Vesper. Bond would agree since he never even tried to shag Camille.

I think the opening credit sequence set to Jack Black and Alicia Keys' "Another Way to Die" was the finest credits for a Bond film since Goldeneye. I was also glad to see Bond's fish eye with Craig walking in profile then shooting at the camera. Perhaps the next Bond movie can properly open with it like it's supposed to

After six films and two different Bonds she's been in charge of, I've come to the conclusion that it's time to retire Dame Judi Dench as M. Dench's M is terrible, a royal fuck up. She was totally bewildered that her personal bodyguard was a Quantum agent and spent the movie having Mr. Burns'-like trademark changes of heart; first empowering Bond, then disavowing him, then reauthorizing him. All she could do was scold him while Bond executed potential leads and beat up her security guards. Bond mocked her for acting like his mother while the Ministers she answers to roll their eyes at her inability to keep any control whatsoever over 007. And that's just in Quantum of Solace. Dench's M also let part of MI6 headquarters get blown up, then was captured and held prisoner in The World Is Not Enough. Dench is the worst M ever. There is no way her predecessor as M, that gruff old British bulldog Bernard Lee, would let himself perenially get caught with his knickers down the way Dench's M does. It's time to show this M the door. Craig's Bond doesn't need a denmother, he needs a hardass supervisor to keep him in line.

Even with its drawbacks, I would call Quantum of Solace a better overall film than Casino Royale, although that's a backhanded compliment. I still feel to this day that Casino Royale was a wildly overpraised Frankenstein monster of three different films wedged together, two of the three I'm not fond of. But I still really like the middle portion of Casino Royale, where Bond plays poker and begins his love affair with Vesper. Incoherent action sequences aside, Quantum of Solace is a more consistent film in its entirety, but nothing about it was as terrific as that middle hour of Casino Royale. Quantum of Solace is a sufficient James Bond movie, even if for large stretches of it, Bond is not quite himself. But he is getting closer. Perhaps third time's the charm.
Posted by Back of the Head at 12:20 PM