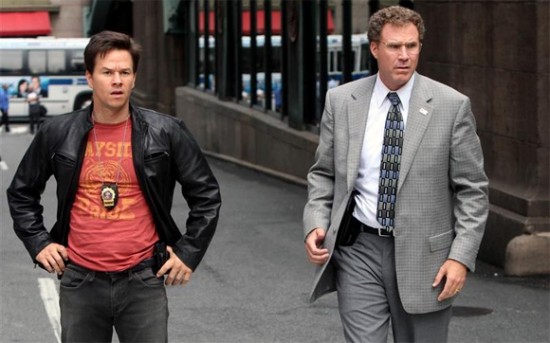 ** SPOILERS **
You ever hear a guy tell a joke, get a laugh and then decide the best way to follow up the joke he just told was to tell it again? That's The Other Guys. In a live action cartoon version of New York City narrated by the godly omniscience of Ice-T, Will Farrell and Mark Wahlberg are a pair of desk-bound, going-nowhere detectives handling the paperwork of human demolition derby supercops Samuel L. Jackson and Dwayne "The Rock" Johnson. Jackson and Johnson get their swaggering asses killed, leaving a hole open for another duo to step up and become the alpha males of the department. Despite loathing each other - Farrell is a straight-arrow nerd and Wahlberg is a competent but desperate powder keg - the Other Guys get involved in cracking some sort of  bewildering ponzi scheme involving Steve Coogan that absolutely no one in the audience understood or gave two shits about. There is some funny stuff in The Other Guys; the first act is a gonzo bonanza of oddly clever one-liners and bizarre behavior (especially the jaw dropping scene of how Johnson and Jackson bite it). Wahlberg's utter disbelief that Farrell is married to Eva Mendes and his infatuation with her draws some real laughs. By the mid-point, The Other Guys starts to repeat itself and its jokes ad nauseam, staying far too late at the party while tacking on badly choreographed and banal action sequences. Was Michael Keaton's running joke about not realizing he constantly quotes TLC song lyrics a joke worth going to the well to over and over? On the other hand, The Other Guys does some amusing riffs on Lethal Weapon: the suicide jumper scene, the leads getting blown back by an explosion, when the renegade cop has dinner at home with his straight laced partner and learns to like him. The "bribery" jokes cracked me up, but I liked the flashback that Wahlberg ended up in the police doghouse for shooting Derek Jeter (I'd say that makes him a hero) more than Farrell's backstory of being a pimp in college. The movie certainly didn't need a role reversal between the leads tacked on, nor did a subplot of Farrell and Mendes breaking up and getting back together add anything but length to the running time. Then again, with cameos from David Wallace from The Office and Jean-Ralphio from Parks and Recreation, it was good to have a reminder that the NBC fall season is right around the corner. Also, stay away from cocaine-covered cars and "soup kitchens".
Posted by Back of the Head at 12:57 PM