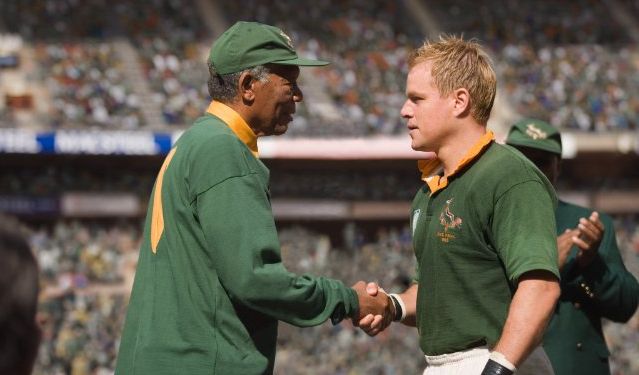 46664
Invictus can be looked at two ways: 1) It's the worst sequel to District 9 ever made. I mean, how do you do a movie set in South Africa without any Prawns? Where are the fucking Prawns?! 2) More accurately, Invictus is a fine, noble film by Clint Eastwood about Nelson Mandela's Presidency over South Africa and his attempts to unite his country after decades of apartheid. Mandela's fierce determination to find ways to bring the minority whites and blacks of South Africa together finds focus via the Springboks, South Africa's rugby team, whom Mandela is determined to inspire to win the World Cup, thereby inspiring the entire nation. Mandela forms a friendship with the Springboks' captain, Francois Pienaar. Both men are pillars of nobility, each admiring the other without a hint of conflict; any skepticism or hostility regarding Mandela is left to either Mandela's underlings or Pienaar's teammates, all of whom fall in lockstep with Mandela's unifying vision by the end. As Mandela, Morgan Freeman does admirable work, while Matt Damon takes on the South African accent successfully, though he sports a nose prosthetic that's only slightly less distracting than the one he wore in Ocean's Thirteen. Rugby is never fully explained to the non-rugby-indoctrinated audience - Harry Potter took much more care in laying out the intricacies of Quidditch - so it was difficult to invest in the big rugby match at the end, which seemed like a lot of sweaty, bleeding dudes piling on top of each other. Much more powerful was Damon leading his rugby team on a visit to Robben Island and seeing the tiny jail cell (46664) Mandela occupied for 30 years. I'll never forget Nelson Mandela's prison cell number for as long as I live because Bono used to put it on the big screen at U2 concerts and ask everyone in the audience to text it during the "Vertigo" tour.
Posted by Back of the Head at 9:35 PM