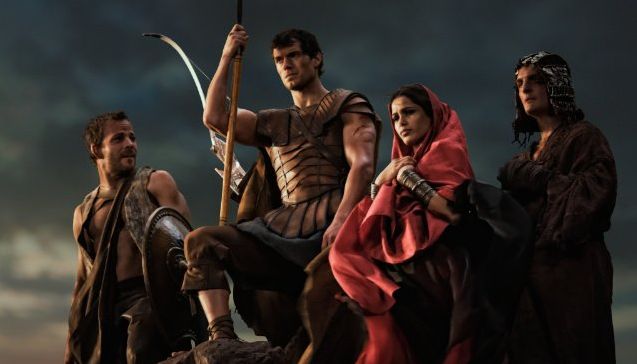 
Today Is The Day Gods Die
A sweaty abs and pecs decathelon of gods and killing and killing gods, Immortals stars future Superman Henry Cavill as Theseus, a peasant man better at killing than just about everyone else in Ancient Greece. Theseus' awesome killing skills were honed all his life by a crotchety old man (John Hurt), but this old man is in fact Zeus himself (Luke Evans) in disguise. Zeus spends most of his time hanging out with mortal men (and banging mortal women, it's presumed but never shown) yet Zeus makes a big stink of yelling at and forbidding his fellow sexy young gods of Olympus to do the same, even his favorite, the exquisitely blonde Athena (exquisitely blonde Isabel Lucas), under penalty of death. And Zeus means it. Gods like Poseidon (Kellan Lutz), however, seem bored of their eternal lives of posing for the Mount Olympus edition of Men's Fitness and decide to meddle in the affairs of Man when they see fit, to their surprising peril.

Meanwhile, mad king Hyperion (Mickey Rourke, lording it over everyone) hates the gods fiercely and concocts a mad scheme to steal a godly weapon called the Epicrus Bow and use it to release the Titans from their prison in Mount Tartarus. The Titans will, Hyperion presumes, kill the gods he hates so much. More interesting than his god killing plan is Hyperion's intention to spread his seed into every woman in Greece. But first, kill the gods. Theseus is no fan of the gods himself, but is nowhere near as belligerent about it as Perseus was in last year's Clash of the Titans. Theseus finds his faith with all sorts of help from the beauteous and exotic Virgin Oracle (Frieda Pinto), who's the only one who knows where the Epicurus Bow is.

Immortals is no quest movie like Clash of the Titans, however - Theseus doesn't so much go searching for the Epicurus Bow as randomly stumble onto it while burying his dead mother. And he sure has a trouble holding onto it. Until the big kill-a-thon finale, most of Immortals has the characters standing around explaining things to each other, with frequent bursts of viscera-spilling slaughter to keep things wet. The paper-thin plot seems to grind the middle act to a halt just to belabor working in its version of the myth of Theseus killing the Minotaur into the movie. Tarsem directs Immortals with an abundance of eye-popping bombast and go-for-broke hysteria. The movie only seems to come alive when depicting frenzied orgies of blood and death.

As Theseus, Henry Cavill snarls and seethes and slaughters with style. His climactic mano-e-mano slugfest with Hyperion, who slit the throat of Theseus' mother to earn his righteous ire, is actually much more interesting and physical in contrast to the epic battle between the gods and the Titans. The gods vs. Titans melee is entertainingly slo-mo hyper-stylized in the Zack Snyder 300 mode, but the gods disappointingly don't utilize their trademark powers. Zeus never uses his Thunderbolt, Poseidon never calls forth the power of water, etc. The Titans themselves are a letdown; portrayed as blue-painted pigmy-looking man-monsters and not whatever you'd expect the mighty immortal beings who sired the gods would look or act like. Immortality is the foremost concern of both man and god in Immortals, but killing with blood and lust seems to be all anyone is really good at.
Posted by Back of the Head at 3:17 PM