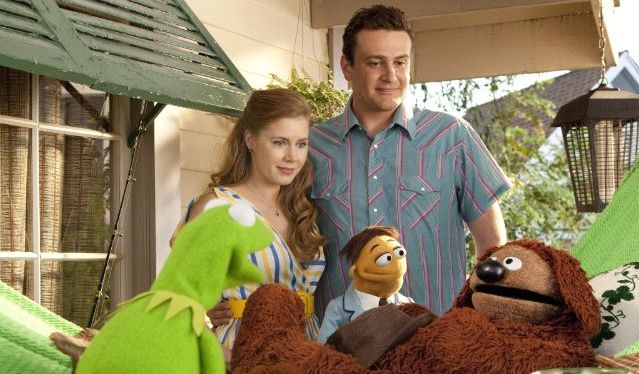 I Hope That Something Better Comes Along

In my movie, a character played by me, which is essentially a stand in for the real me, plus a brand new superhero I created, learn that the evil Lex Luthor has plans to destroy the Hall of Justice. So we go to tell Superman, but we find him moping around the Fortress of Solitude, and we discover he doesn't want to reassemble the League to stop Luthor. But I egg him on to finally get the team back together, and we go with him until we find Batman, Wonder Woman, The Flash, and the rest. But once the League is all together, they still can't beat Lex Luthor despite all of their combined powers. Until I, or rather, the new superhero I created, swoop in to save the day so that in the end, the Justice League emerges triumphant. The movie ends with Superman, Batman, and the rest of the heroes hoisting my new character on their shoulders and proclaiming to the cheering throngs that they couldn't have done it without me. Wouldn't that be great?

I'd be lynched the very next time I set foot in a Comic Con. And yet, this is essentially the experience of watching The Muppets.

There is no doubt co-writer, executive producer and star Jason Segel loves the Muppets and has all his life. This evident throughout The Muppets. It was his clout and perseverance that finally got a new, big budget, theatrical Muppets feature film made. Segel loves and reveres the Muppets. The Muppets is a 90 minute treatise that you can love and revere something all your life and yet fundamentally misunderstand it. But Segel does understand himself, so he made The Muppets about himself.

The Muppets opens not with Kermit, Miss Piggy, Fozzy Bear, Gonzo or any of the classic characters, but with a flashback sequence starring Segel and his "brother", the new Muppet character he created named Walter. It's all about how they both grew up worshiping the Muppets in a strange, live action-cartoon small town USA called "Smalltown". Segel's character, a dim-witted but good natured man-child version of himself,  is engaged to good natured schoolteacher Amy Adams, and they are off to Los Angeles to celebrate their anniversary, with Walter in tow. We learn all of this through a prolonged, unmemorable musical number with a dancing human cast of dozens. About midway through the singing and dancing, I was forced to turn to my friend beside me and sincerely ask, "Are there any Muppets in this Muppet movie?"

While in Los Angeles, Segel, Adams, and Walter visit the dilapidated old Muppet Studios and learn that evil oil baron Chris Cooper plots to buy the Studio land so he can drill for oil. Or maybe he already owned the land, it wasn't clear. What was clear thanks to a plot point delivered by Statler and Waldorf themselves, was that the Muppets need to raise $10-million to buy back the land by a Friday midnight deadline or else Cooper would indeed own the land, as well as the rights to the Muppets' names and likenesses.

Segel, Adams and Walter travel to Kermit's mansion and meet the Frog himself. Kermit is tired and sad, presented as an old washed up showbiz relic lamenting the dissolution of the Muppets and the abandonment of public interest in them over the years. Think old Charles Foster Kane all alone in Xanadu with his ghosts and memories -- this isn't the Kermit the Frog I know. But of course, Kermit must get the gang back together. The Muppets brightens up considerably as favorites like Fozzie Bear, Gonzo, Scooter, Bunsen Honeydew and Beaker, Animal, Rowlf, and of course, Miss Piggy join the action. A bit of good luck gets the Muppets two hours of television time on Friday night to put on a show and raise the ten million dollars they need, but keeping the Muppet Telethon on the air is another matter, with Cooper conspiring to literally shut them down.

When the spotlight is on the Muppets we know, love and came to see, The Muppets does deliver the zany, hilarious chaos that is their trademark. Piggy and Kermit's "marriage" from The Muppets Take Manhattan is dealt with, as the screenplay milks holding off their emotional reunion until the last possible moment. It's delightful to see Scooter clean up the Muppet Studio and work backstage to keep the show moving. Animal has an amusing subplot where anger management classes have calmed him from thrashing on the drums. Fozzie, Dr. Bunsen Honeydew and Beaker, Rowlf, the Swedish Chef, Gonzo and Camilla the Chicken, Statler and Waldorf, all have their moments, but not enough of them, just token bits where they do a little something before the movie whisks by them. More than a few callbacks to The Muppet Movie, The Great Muppet Caper, and The Muppets Take Manhattan occur, often funny and welcome, yet they only serve to underscore how lacking the new material and songs in the movie are.

Whopping chunks of the movie are taken up by cloying subplots involving Segel and Adams. Adams stifles from Segel's lack of attention to her and focus on Walter, as he of course forgets their anniversary dinner. Segel also shanghais The Muppets and uses the movie as a vehicle to explore his personal, real-life Muppet obsession, via a musical number where he questions whether he's a Man or a Muppet, with Segel debuting a Muppet version of himself. Walter joins him in his existential moaning, his "human" side portrayed by Jim Parsons from The Big Bang Theory. This, the subplot of Walter trying to find his special talent so that he can swoop in to save The Muppet Telethon at the very last minute, and the fact that Walter is the most important Muppet character in the story, by whom the rest of the Muppets get their careers back, reduces Kermit and the actual Muppets into supporting players in the movie bearing their name. The more accurate movie title would have been The Jason Segel Experience Featuring WALTER!!! Guest Starring The Muppets.

Frank Oz reportedly declined participation in The Muppets because of issues he had with the script and the way the Muppets are portrayed. Kermit himself, the very soul of Muppet optimism, who left the swamp for Hollywood in The Muppet Movie not to become rich and famous but because he wanted "make people happy", turns down the initial plea to reunite the Muppets! He doesn't seem to really believe in himself or the Muppets anymore, often arbitrarily doing things just so the plot is movin' right along. The idea that the Muppets are obsolete, "not funny", and "not relevant" to today's culture is mentioned over and over, to the point where the audience is bludgeoned with the idea. And despite the Muppet Telethon and Walter saving the day, a bizarre plot point has it that the Muppets end up "nowhere near" the $10,000,000 they needed to save Muppet Studios. A throwaway line over the credits indicates the Muppets got to keep the Studio anyway; making it so the Muppets didn't actually earn their victory. A downright offensive edit occurs when Kermit and the Muppets gather together to sing "The Rainbow Connection", the most pivotal callback to classic Muppet magic, and the movie cuts away from the song (to a backstage payoff for Animal getting to drum again, but still)! You don't cut away from "The Rainbow Connection!" Perhaps someone should have seriously listened to Frank Oz's objections.

In classic Muppet movie fashion, The Muppets is chock full of celebrity cameos, some having a lot more fun than others. Jack Black, as Animal's anger management sponsor whom the Muppets kidnap to be the host of the Muppet Telethon, Dave Grohl of the Foo Fighters playing the drummer of Fozzie's new Reno band and dressed in Animal's fur, Rashida Jones from Parks and Recreation as the television executive who reluctantly gives the Muppets airtime on her network, and Alan Arkin as the tourguide to the old Muppet Studios seem to enjoy themselves the most. Other cameos include Donald Glover and Ken Jeong from Community, John Krasinki from The Office and his wife Emily Blunt as a secretary to Miss Piggy (who no doubt wears Prada), Neil Patrick Harris, Selena Gomez, and Zach Galifianakis as a homeless man. Most of them get rewarded for showing up by getting to sing "Mahna Mahna" with the Muppets over the closing credits. While all of the live action actors behave like normal people, it's grating how Segel and Adams' characters exist in a strange, half-cartoon state.

In the end, The Muppets sadly falls short of what it could have been, a classic Muppet movie to shepherd a new generation into loving the Muppets. The agenda of the filmmakers was hellbent on establishing Walter as Your Favorite New Muppet, but my reaction to Walter is very similar to how audiences reacted to Jar Jar Binks in Star Wars: Episode I - The Phantom Menace. (And at least Jar Jar has a memorable voice and persona you can use to mock him as well as being eventually portrayed as the gullible idiot who ushered in the fall of the Republic.) We are supposed to love Walter walking out of The Muppets and I cannot express enough how much I do not and instead careen headlong screaming in the polar opposite direction. Segel and the filmmakers were half asleep, and they heard voices, and regretfully, they heard them calling Walter's name.

But the Muppets will endure, as they always do. Someday, there'll be another, better Muppet movie. Someday, we'll find it...
Posted by Back of the Head at 4:51 PM