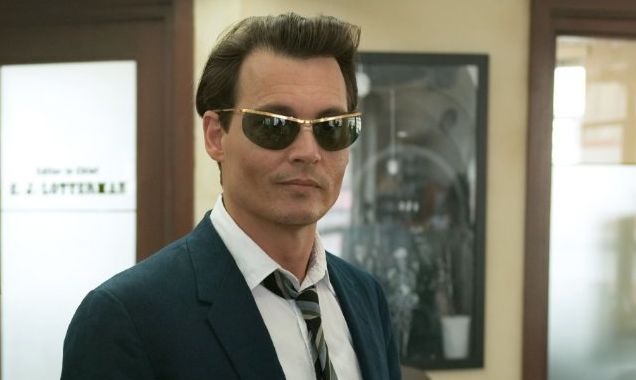 ** SPOILERS **
The appeal of The Rum Diary is threefold: to see Hunter S. Thompson's "lost" novel translated to the big screen, to see Puerto Rico circa 1960 recreated for the film, and to watch Johnny Depp portray an actual human being and not some sort of fantasy cartoon character in a garish costume with a goofy accent. All of this is entertaining for about an hour or so. Depp plays Paul Kemp, an alcoholic failed novelist transplanted to San Juan to write horoscopes for a failing newspaper. As The Rum Diary limps along, alcohol-fueled madcap adventures ensue for Depp, who finds himself embroiled in American corporate interests in developing beachfront resorts on the island. Richard Jenkins is Depp's bewigged, beleaguered editor, Giovanni Ribisi is Depp's swarthy, Hitler-loving, junkie roommate, Aaron Eckhart is the slimy American corporate raider who woos Depp to write copy for his planned resort's "travel brochures", and Amber Heard is Eckhart's mistress and the object of Depp's lust. Strangely, they each disappear from the picture without fanfare by the third act, except for Ribisi, whom we're all stuck with until the bitter end. The Rum Diary fizzles out gradually in its second hour as the realization set in: Essentially, this is Pirates of the Caribbean 5. An island-hopping Depp and his loyal fat trouble-bound sidekick Michael Rispoli are regularly drunk on rum and get into all sorts of trouble which sees them running for their lives from furious island natives. Heard is the sexy blonde Keira Knightley stand in, Eckhart and his group of monopolistic business men take the place of the East India Trading Company, and The Rum Diary even concludes as the Pirates movies do with Depp sailing away into the sunset on a small boat. Savvy?
Posted by Back of the Head at 2:03 PM