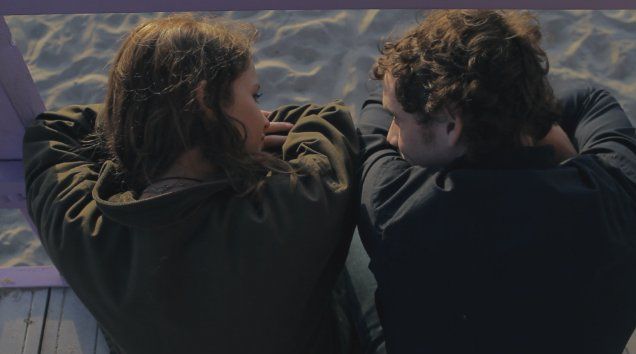 
In Like Crazy, Felicity Jones and Anton Yelchin meet as young college students in Los Angeles. She is an idiosyncratic British national studying to be a writer. He is a laconic designer of furniture. They quickly and passionately fall in love and are happily a couple until the end of college, when she has to return to London for the summer. In a fit of ill-considered madness - because young love is both blindness and madness - Jones decides to remain in LA for the summer with Yelchin before returning home. When she tries to re-enter the United States, she is red-flagged for violating her student visa and sent back to London straightaway. They are both heartbroken, forced apart by time zones, an ocean and the entire land mass of the United States. Like Crazy delves into the myriad difficulties and circumstances Jones and Yelchin face in trying to maintain their long distance relationship. Most compellingly, Like Crazy carefully and genuinely examines the emotional cost of their relationship, spent mostly apart over seven years, always in longing. Yelchin occasionally visits Jones in the UK but is incapable of transplanting his life there. They agree to marry but even then, US immigration continues the red flag on Jones, preventing her from returning to LA. The pressures and guilt of starting and stopping, waiting, and trying to start again, begin to mount. For a while, they try life with other partners. Jones' next door neighbor Charley Bewley falls madly for her. Yelchin finds the love of Jennifer Lawrence. Both Bewley and Lawrence are refreshingly wonderful people as well, worthy of Jones and Yelchin. Perhaps better than Jones and Yelchin deserve the way they are ultimately (unfairly?) cast aside, with regrets, for Jones and Yelchin's belief in their true love. Like Crazy's ending is particularly ballsy, leaving it up to the audience to determine whether Jones and Yelchin can truly be happy together or whether the ideal of their youthful love they fought so long for has passed them by. Shot for a miniscule $250,000 with no screenplay, working only from a 50 page outline, Like Crazy is based on the real life experiences of director Drake Doremus. All of the dialogue is completely improvised by the extraordinarily talented actors. As the leads, Yelchin and Jones are immensely appealing, their chemistry palpable. Like Crazy is a remarkable achievement; charming, sometimes devastating, and truly heartfelt.
Posted by Back of the Head at 8:16 PM