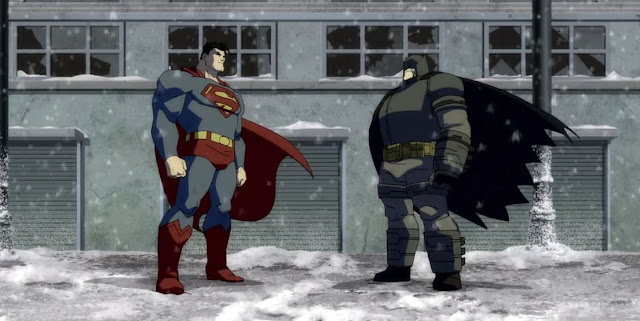 "This will be a good life. Good enough."

Batman: The Dark Knight Returns, Part 2 delivers the second half of DC Animation's adaptation of Frank Miller's seminal graphic novel in grandiose, ultra-violent fashion. Ultra-violent cannot be emphasized enough. Exceeding even the graphic violence in The Dark Knight Returns, Part 1, this is the most brutal, blood-soaked Batman tale ever depicted in animation, or in live action for that matter, as the epic story of the Dark Knight of Gotham City reaches its definitive conclusion. The animators and filmmakers bravely and boldly made no compromise of what was on the page for this cartoon.

The first half is based on the third chapter of Miller's tale, "Hunt The Dark Knight", dealing with Batman's (Peter Weller) final confrontation with his arch nemesis, The Joker (voiced by Michael Emerson), curiously referred to without the prefix "the" throughout the film. Galvanized by the return of the Batman, Joker plans one last murder spree when he's invited to appear on the late night talk show The David Endocrine Show. (In the comic book, this character is drawn to resemble David Letterman, but that's changed to a more generic character in the film, yet Endocrine's voice sounds a whole lot like Conan O'Brien.) The Joker gasses and murders hundreds of people as Batman, once again declared a public enemy by the new female police commissioner replacing the elderly, retired James Gordon, is forced to battle the Gotham City Police.

Batman and Joker's last battle at a carnival is shocking for its sheer brutality: Joker shoots Batman in the gut and later stabs Batman repeatedly in the midsection. Batman impales Joker's eye with a Batarang and nearly snaps his neck. (Joker finishes the job by snapping his own neck to frame Batman for his murder. Batman responds by spitting in Joker's face.) Joker's rampage includes shooting dozens of people dead and even his henchmen trying to kill Robin (Ariel Winter) meet bloody ends being decapitated by a roller coaster pulley. Both Batman and Joker take turns punching and kicking women who happen to be in their way. Also disturbing is what has become of Catwoman; the aged Selina Kyle is now a rotund madam of an escort service. (Joker tells her, "Selina, the years have not been kind", before tying her up in a Wonder Woman costume.) Miller's withering view of Catwoman, whom he made a prostitute in his prequel Batman: Year One, remains disappointing at the very least.

The second half, based on Miller's final chapter "The Dark Knight Falls", leads to the ultimate mano e supermano showdown between Batman and Superman. The Man of Steel receives a lot of screen time, toadying up to President Ronald Reagan, who tasks him to personally deal with the "problem" in Gotham City that's embarrassing his administration. The Dark Knight Returns, Part 2 is also steeped in the 1980's Cold War and fear of nuclear annihilation as Superman unleashes his raw power against the Russians in the country of Corto Maltese. Superman nearly dies saving Corto Maltese from a Russian nuclear missile, but the electromagnetic pulse generated by the nuclear explosion blankets the United States in darkness. It's up to Batman and Robin to rally the warring street gangs called the Mutants and the Sons of Batman to maintain order in Gotham as riots and looting sweep the entire United States.

The Dark Knight Returns, Part 2 expands on some of the back story in Miller's tale. There's a bit more dialogue between Bruce Wayne and Clark Kent touching on what lead the Justice League to disband and why Superman became a government agent while Batman retired from crime fighting. A few extra moments not in the graphic novel are sprinkled in, including a terrific cameo by the Batmobile from the Tim Burton Batman movies. The filmmakers also ably compensate for the lack of the graphic novel's pivotal narration in the final moments of the story by showing a bit more of how the newly undead Bruce Wayne leads his new army in the caves underneath Gotham. There's also a great little moment added between Clark Kent and Jim Gordon at Bruce Wayne's funeral:

Gordon: "Were you a friend?"
Kent: "I honestly couldn't say."
Gordon: "Sounds about right."

And yet in a way, the whole of The Dark Knight Returns really comes down to The Fight. Batman versus Superman. Miller's graphic novel was the first time readers truly witnessed a definitive battle between DC Comics' two greatest superheroes, and Part 2 more than does justice to one of the most famous and beloved superhero slugfests of all time. The fight is expanded beyond what's depicted on the page, leaving the confines of Crime Alley where Bruce Wayne's parents were murdered as Superman literally throws and punches Batman all around Gotham, making for a much more riveting and satisfying smackdown between the World's Finest heroes. (Robin in the Batmobile tank and the one-armed Green Arrow playing his part with a Kryptonite arrow get more moments as well.) In the end, of course, Batman wins, because Batman always wins. Thus the two halves of the The Dark Knight Returns rise out of the shadows as the proud new standard in Batman animated films.
Posted by Back of the Head at 9:59 PM