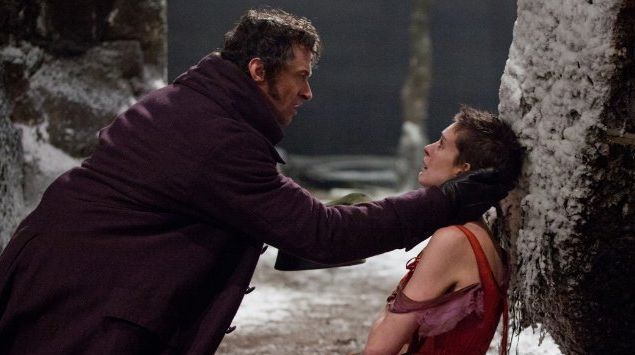 When a bunch of French bitches get together and start singing, it's bad news for Anne Hathaway. This was the first lesson I took away from Tom Hooper's Les Misérables, a visually splendid, bombastic adaptation of the Broadway musical adaptation of the Victor Hugo novel adaptation of stuff that may or may not have happened in France a couple of hundred years ago, give or take. Never having read the novel, nor seen the Broadway musical, nor lived in France in the 19th century might be the best way to experience this Oscar baiting rendition of Les Mis. I mean, of course, no one in Les Mis sings "Uncle Fucker" or "What Would Brian Boitano Do?" but the songs are almost as memorable as "La Resistance" in South Park: Bigger, Longer, and Uncut.

Hathaway is the first and indeed most important casualty of Les Mis; a single mother of a young daughter working in a sweatshop. She's accused of prostitution, fired, and then really showed those singing bitches in the sweatshop by becoming an actual prostitute, at the behest of a different set of singing bitches who are also prostitutes. For no good reason, besides maybe that they're all jealous she's Anne Hathaway, no one in Les Mis seems to like Anne Hathaway. It's a very sad story. She has her head shaved to a buzz cut like Natalie Portman had her head shaved bald in V For Vendetta, and like Portman for Black Swan, Hathaway should probably get the Oscar. Hathaway's performance is lovely and sublime; she sings her heart out in anguish as the camera pushes into her beautiful face and almost conks her on the forehead. Hathaway is already riddled with disease after being diddled by Frenchmen, and though she's dying, she's still sort of saved by guilt-ridden Hugh Jackman.

Jackman is Jean Valjean, aka prisoner #24601, aka Le Weapon X, aka our hero. He once stole a loaf of bread and paid dearly for it - 20 years in prison. Le punishment for le crime is le harsh. Jackman looks totally horrid at the start of Les Mis, but after escaping parole and hiding out in a monastery, a priest saves him from being sent back to le hoosegow and Jackman finds God. Eight years later, prim and proper, he's a Mayor and a factory owner and feels pretty good about how he turned things around. But like Peter Parker ignoring that one thief who ended up killing Uncle Ben, Jackman turned a blind eye to how his employee in the sweatshop Anne Hathaway was fired for the crime of allegedly being a prostitute. Jackman saves her from prison and promises her on her deathbed that he'll also save her young child Cosette. Then Jackman finds out a man was captured under suspicion of being Jean Valjean and will be sentenced to prison. Jackman then decides to save him from prison. Jackman must save everyone from going to prison. Especially himself, because he exposes his true identity and goes back on the lam.

Hunting down Jackman is Russell Crowe as Javert, le supercop maximus de Paris. Javert never liked Valjean, especially detesting his ridiculous feats of strength and his marvelous singing voice, and spent most of his professional life hunting Valjean down. In an odd bit of plotting, Javert ends up working under Valjean for a bit, all the while suspecting his true identity. When Valjean reveals himself, the jig is up and Javert goes back on the hunt, chasing his prey on horseback all over Paris, even indoors where horses really shouldn't be allowed. Javert is kind of like a comical 19th century Terminator crossed with The Rock, in how he will stop at nothing to get Valjean, constantly refers to himself in the third person, and he can't sing. Later, Javert can't get over Valjean doing him a solid and not killing him when he has the chance. When Crowe realizes Jackman, covered head to toe in shit, still sings better than him, he can't take the indignity any longer and hilariously chucks himself into the river, his body cracking in half on the stone. Like the Terminator, Javert learns a lesson about humanity: "I know now why you sing. But it is something I can never do." And then he jumps to his death. In the very end, when all the dead characters are having their Barricade and Flag Party in Paris Heaven, Crowe was noticeably not invited. No way they'll let him ruin their harmonies.

Running from the law is a fine time to decide to adopt an eight year old girl, but that's exactly what Jackman does. As he promised the dying Hathaway he would, Jackman finds her young daughter Cosette and buys her for 1500 Francs from Sacha Baron Cohen and Helena Bonham Carter, a couple of sneak thieves running an inn where every guest is robbed blind in the days before you had to pay for wireless in your hotel and you're charged if you even open the fridge in your room. This is the madcap comedy portion of Les Mis, to help wash down and balance out all the les miseries. Baron Cohen is especially jarring, not because Borat is suddenly in Les Mis, but because he's inexplicably the only actor who attempts to speak with a French accent. Never question Sacha Baron Cohen's commitment to the bit.

At this point, les plot holes start piling up: Jackman's first night with Cosette sees him teach her all the old Valjean tricks of running from Crowe; how to escape from getting chased by a horse, how to scale stone walls, and how to hide in monastery. Jump forward nine years, Cosette is now bountifully proportioned Amanda Seyfried, and we learn 1) they're still in Paris for some reason, 2) they're still on the lam, 3) Jackman inexplicably never told her A) who he really is and B) why they keep freaking out and hitting the bricks every time they see Russell Crowe walking down the street. (Jackman makes one mention of booking passage to England, but he never visits his travel agent. Monsieur, leave Paris! It will miraculously solve all of your problems! You would be less miserable.)

One fine French afternoon, Seyfried sees Eddie Redmayne, a rich young ginger who's neck-deep involved in some college-age frat prank of trying to spark a second French Revolution, on the street for a split second and that split second is all they need to fall instantly, head-over-heels, the-rest-of-the-movie's-plot-becomes-mostly-about-them in love. Redmayne knows Borat's daughter, Samantha Barks, who's totally in loin love with him, but he's totally oblivious and asks her to use her sneak-thief ways to find Seyfried for him so they can hook up in a cemetery. This is the 19th century France version of 'hook up', which means seeing each other through a cast iron gate and singing each other your names. But plot machinations keep the young lovers apart and there is la revolution to fight.

The revolution is tragic, by that I mean ridiculous. It's basically Redmayne and his idealistic but dunderheaded frat buddies, plus Borat's daughter and a homeless street urchin, versus the entire French army. The people of Paris didn't rise up to fight a war alongside this university a capella group for good reason - it's suicide - though they did throw their old furniture out of their windows to help them form an easily-scaled barricade. Crowe tries to be a double agent but is captured when it's discovered he can't carry a tune. Jackman ends up joining la resistance after he intercepts a letter Redmayne sends Seyfried and sing-reads it out loud. Mademoiselles, this is akin to your dad taking your iPhone and singing aloud all the texts your boyfriend sent you. During the battle, Jackman decides Redmayne is pretty all right and decides to save his life while the rest of his buddies are shot out of windows and blown pieces in a bloody, spectacularly quick battle. Jackman literally carries an unconscious Redmayne like a sack of shit through sewers covered in shit. Later, when Redmayne and Seyfried decide to get married, Jackman reveals he's Jean Valjean to his new son-in-law and for some reason makes him promise to join him in never telling Seyfried. Redmayne's first act as Seyfried's fiance is to lie to her face about why her stepdad disappeared.

Les Misérables has almost as many endings as Lord of the Rings: Return of the King. After Javert takes a swan dive into the river and Jackman decides to run off, Seyfried and Redmayne get married and their wedding is crashed by Borat and Mrs. Tim Burton. Through Borat, Redmayne and Seyfried discover the whereabouts of Jackman - shockingly, he is hiding in a monastery in Paris! Who could ever have guessed?! Finally, Seyfried gets to find out Jackman is Jean Valjean and he mercifully, happily dies; Jackman is welcomed into Paris Heaven by the Force Ghost of Anne Hathaway. And this is where the whole Force Ghost thing gets as confusing as why Anakin Skywalker is young at the end of Return of the Jedi while Obi-Wan and Yoda are old: Force Ghost Anne Hathaway is beautiful and clean again but still has her hooker boy haircut. Everyone who's dead at the Barricade and Flag Paris Heaven Party looks exactly as they did at the moment they died. Yet Jackman's Force Ghost is him as a grey mutton-chopped old man. If only Jean Valjean's Force Ghost had a mutant healing factor.

In conclusion, I enjoyed Les Misérables but it was very, very long.
Posted by Back of the Head at 12:45 PM