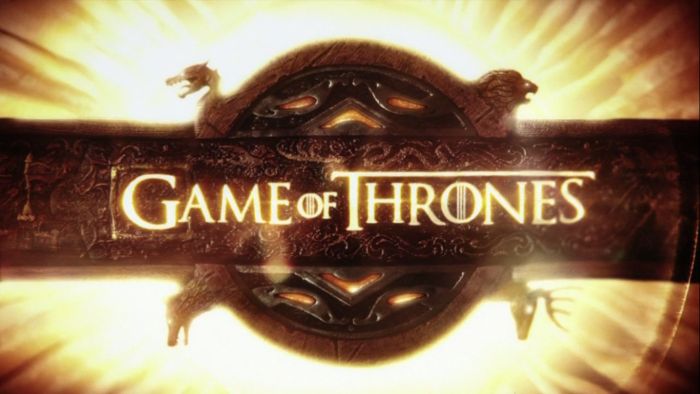 Some enjoyable references to The Godfather this week. North of the Wall, Jon Snow, Mance Rayder, Ygritte and the Wildlings came upon what was left of the Night's Watch the White Walkers fell upon. Mance cracked "Always the artists" but it's true, for a bunch of ice zombies the White Walkers have a keen eye for design. They arranged the decapitated horses in a pattern similar to the Targaryen's Fire and Blood sigil. Probably a coincidence. Mance sent his guys, including Jon, to scale the Wall and prepare to attack Castle Black. Besides the horse heads, the other Godfather reference happened in Astapor. Any joy Daenerys may have had at Ser Barristan Selmy joining her Queensguard dissipated when Selmy and Jorah turned into the Bickersons. Worse, they publicly contradicted her during her negotiation to buy the Unsullied, something neither Don Corleone nor Michael Corleone would have tolerated. Especially not Michael. "Don't ever take sides against Khaleesi again." (Ask her handmaiden sealed in Xaro Xhoan Daxos' vault about that.)

Daenerys bargained hard for the Unsullied. Despite the chattering of the two old codgers behind her, she needs that army of unquestioning killer slaves badly enough that she traded one of her dragons for them. (The big one.) Also, probably because of Ser Statler and Waldorf arguing over whose false teeth is shinier and realizing she's been fresh out of handmaidens to talk to since she left Qarth, she asked for and received the translator Missandei as a gift. This is a good deal for both ladies. Daenerys is a savvy consumer. Missandei doesn't seem like she knows any fancy new sexual positions to teach the Khaleesi like her last handmaiden, but maybe she'll surprise all of us.

The other double-event that went on was the ever-present threat of rape. Captured by Roose Bolton's men, Jaime made sure Brienne knew what to expect when they made camp and try to rape her. In his own way, he was looking out for her with his instructions. Meanwhile, Theon was freed by the mysterious stranger who said he was working for his sister and set off on horseback, only to be chased and nearly killed. Well, before killed, raped, because they pulled down Theon's pants and promised to fuck him into the ground. Then arrows slayed the rapers and Theon's savior emerged again. They called him a little bastard, so he has to be Ramsay Bolton at last, because in Westeros, no one calls you 'bastard' unless you actually are someone's illegitimate child. Theon was reeking of gratitude (couldn't resist) but this are going to get worse for him before they get better, which is probably never.

Lord Hoster Tully, we hardly knew ye. A somber funeral for the Lord of Riverrun and Catelyn's father had some tiresome Tully family intrigue. Catelyn's broher Edmure (played by the guy who played Brutus in Rome) is kind of a dope, bragging to Robb about how he and his men took an old mill. Never mind they let the Mountain escape to Casterly Rock, but they have an old mill now. They can make some cider! Robb doesn't need cider (these are old Simpsons jokes - no one was talking about cider) and he's losing the war, even though they have a couple of young Lannister cousins hostage that Talisa is scaring with stories of Robb actually turning into a wolf. The only Tully who seems to have his wits about him is Catelyn's uncle the Blackfish, who jokes he's been called "Blackfish" so long, no one remembers his name. It's been a while since I read the books and I sure don't.

I'm happy to report that everything seems to have worked out for Hot Pie. No, really, I mean that. As Arya, Gendry, and the Brotherhood Without Banners march onwards to where ever they're going, Hot Pie found himself a place in the inn they were staying at as a baker. It's nice to see someone innocent of the game of thrones in Westeros seems to have made out okay, as opposed to raped or killed or worse. I hope Hot Pie has a long, happy life baking brown bread in that inn, and no one calls him fat and makes jokes about eating him like Craster did to Sam Tarley when what was left of the Night's Watch came crawling back to Caster's Keep. Sam did get to witness the miracle of childbirth and it right freaked him out. And he was telling Jon Snow he could act as a midwife himself last season.

Meanwhile, in King's Landing, political intrigue abounds. Tywin has moved the Small Council meetings to the Hand of the King's chambers, and after a hilarious game of musical chairs, they got down to business: Littlefinger, Lord of Harrenhaal in name if not in practice, was given instructions to go to the Vale, marry Lysa Arryn, bring her into the fold, and become the new Lord of the Vale. Tyrion gets to be the new Master of Coin, which required him visiting Littlefinger's whore house with Bronn and Podrick to collect the books with all of the Seven Kingdom's finances. Tyrion is alarmed to learn Littlefinger's been borrowing money left and right, and King's Landing owes tens of millions to the Iron Bank of Braavos. May I also say, Tyrion is a fantastic boss, rewarding Pod for saving his life by paying for three whores, one an incredibly acrobatic whore, and giving Pod the time of his young life. Then Pod comes back with all the gold, which the whores suspiciously wouldn't accept. What's this? Whores who don't want to be paid? Tell me more!

Parting is such sweet sorrow. Over in Dragonstone, Stannis is forced to say goodbye to Melissandre, who is mysteriously departing to find someone of Stannis' royal blood for some sort of sacrifice to the Lord of Light. (Gendry? Gendry, probably. All of Robert's other bastards are dead.) Stannis is much more obviously sexually dependent on Melissandre on the show than he is in the books, but when a Red Priestess has gotta go, she's gotta go. Meanwhile, a captive Jaime smooth talks his way into saving Brienne from being gang raped with Lannister Strategy Number One: offering huge sums of money. It seems like it worked too, until they cut Jaime's hand off! That's Westeros for you: doing a good deed and being punished for it go hand in hand. Poor Kingslayer.
Posted by Back of the Head at 11:10 AM