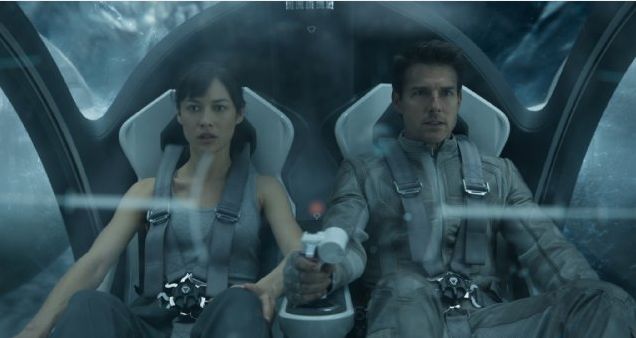 Oblivion has a lot of explaining to do and handles it this way: explain a lot up front, then nothing but questions and confusion for the long middle, then a fast track of rapid exposition at the end. Tom Cruise fills us in on the wild sci-fi concept on the outset: It's the year 2077 and Earth is a devastated but visually spectacular wasteland. It was invaded by alien scavengers called "Scavs" that arrived in a giant pyramid space station called the Tet. The Tet destroyed the moon, wiping out much of humanity. The Scavs invaded, the remaining humans used nuclear weapons, and that was that. Humanity "won". Now, what's left of the human race has relocated to Saturn's moon Titan and is doing just fine, we imagine.

Cruise and his cool, lovely British wife Andrea Riseborough are "an effective team", i.e. glorified "maintenance" (kind of like Wall-E). They were left behind to oversee the giant machines converting the Earth's oceans into energy and repair the battle drones that keep the remaining Scavs on Earth at bay. Two people to watch over a whole planet? That seems strange, but the couple never question this. Cruise and Riseborough live like The Jetsons on a futuristic platform in the sky complete with a sexy glass bottom swimming pool. (We know the Scavs monitor them with binoculars from the ground so no doubt they peep on Cruise and Riseborough having dazzlingly-lit skinny dipping sex up in the sky.) Cruise is the hands-on guy who flies around in his bubble ship and fixes the drones when they're damaged while Riseborough stays behind as mission control, interfacing with their Southern lady overseer on the Tet. They have two weeks to go until retirement (of course), then they can board the Tet and join the rest of the human race on Titan. Wouldn't you know it? Things go horribly wrong.

Despite his space craft having seemingly unlimited range and having a whole planet to patrol as far as he knows, Cruise mainly seems to hang around the ruined remains of New York City. He wanders  the improbably still-standing structures of football stadiums and the Empire State Building, explaining what happened in football games that were played over 60 years ago to his wife who couldn't give a shit. Suddenly, a space craft launched by NASA decades ago crash lands with the crew still in cryogenic sleep, including a beautiful woman Cruise dreams about every night. So Cruise does what any man would do: he brings the much hotter woman whom he secretly dreams of home to meet his wife, who, mind you, is also hot but not as hot. Predictably, Riseborough is not thrilled and wants her gone. Who is this Russian woman, played by Olga Kurylenko? Don't bother asking Kurylenko herself, she has no answers; she barely has anything to say the whole movie. In the words of Leslie Knope, "the female part's a little underwritten."

It pleases Riseborough even less when Cruise and Kurylenko take off together in his bubble ship and have sexy, dangerous adventures. Cruise takes Kurylenko to his secret lake shore cabin in the improbably verdant valley that survived the apocalypse, complete with all the trinkets and classic rock vinyl albums he's been collecting for years. Hey, a guy's gotta have a place of his own. Riseborough is as un-pleased as a wife can possibly be when Cruise has sex with Kurylenko, who tells him up front she's his wife. This is correct: Tom Cruise had a Russian mail order bride arrive special delivery from outer space. Tom Cruise can be the last man on post-apocalyptic Earth and can have two impossibly attractive wives. Cruise and Kurylenko are also captured by the Scavs, whom we are shocked to learn (if we never saw the trailer) are actually humans lead by Morgan Freeman playing Laurence Fishburne playing Morpheus from The Matrix. Freeman is flanked by his trigger happy lieutenant Nikolaj Coster-Waldau, who is most famous for playing Jamie Lannister, the Kingslayer, in Game of Thrones. From their scenes together we learn Jamie Lannister is so much taller than Tom Cruise, Cruise for all intents and purposes might as well be Tyrion Lannister.

The third act of Oblivion ramps up the pace with copious amounts of action to make up for its stately middle section of Cruise flying around pondering how he's going to make having two hot wives work. (Maybe if one stays in the Jetsons platform and one stays in the lake cabin, they never have to meet again?) The reveals of all the mysteries the plot set up come quickly and semi-coherently, as we learn there's much more to Tom Cruise, and much, much more of Tom Cruise (Tom Cruise clones!), than we ever thought possible. (Leaving us pondering questions like, if the Tet had already won and wiped out humanity, why do they still have so many millions of Tom Cruises and in their Tom Cruise factory? Who needs that many Tom Cruises?) Finally, Cruise and Freeman pull a Jeff Goldblum and Will Smith in Independence Day - they manage to get on board the Tet and blow it to kingdom come. All's well that ends well, especially for Tom Cruise, who can die heroically in a nuclear explosion and still pop up at the end since there are plenty of Tom Cruises where he came from. Luckily for Tom Cruise, Kurylenko doesn't care at all which Tom Cruise she ends up with. A Tom Cruise is a Tom Cruise and any Tom Cruise will do.
Posted by Back of the Head at 10:00 PM