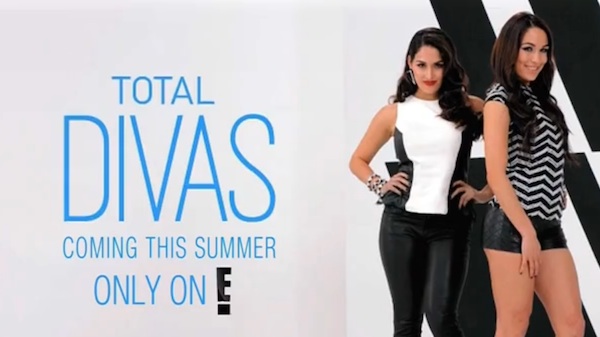 "The thing I like about being in John Cena's house is I feel like I'm in a rap video." - Brie Bella, with the blisteringly apt line of the episode

There's a lot to like about John Cena's enormous mansion in Tampa, Florida. To get there, he flies by private jet with all the sushi a Bella or a Daniel Bryan can eat. And then, we learn Cena lives in a  massive Ce-Mansion, with a waterfall indoor pool, a private elevator to his master bedroom, and a huge white closet where he keeps all his kicks, jorts, and wide array of John Cena T-shirts. And John Cena lives alone in this palace, though Brie implies Nikki Bella spends a lot of time also living there. (But not permanently and legally with a wedding ring.)

Contrast to Bryan Danielson's rustic home in Aberdeen, Washington - as Total Divas cleverly did - which is the house Bryan grew up in and Brie and he plan to own after they retire from WWE. After three days in the lap of Cena luxury, Brie and Bryan return the favor by taking Cena and Nikki to experience living like The Beard. Nikki is totally concerned about her twin sister being forced into living in the lap of not extravagant luxury. Which is not to say it's not a perfectly nice house. But even Brie has qualms. A lot of qualms about what Brie is giving up to live in Aberdeen. Nikki: "The house needs to be torn down and redone." I mean, Bryan doesn't even have a cigar room like a gentleman. Then came the wood chopping competition between the boobilicious Bella Twins and the main event of Summerslam, which the Bellas won. It should also be noted how easily and happily John Cena is distracted by Nikki's rack.

Meanwhile, Eva Marie is this week's Total Divas top heel. She's a piece of work. Eva Marie decides she wants to be Fandango's dance partner, back when he was rotating his weekly dance partner with a bevy of heel ballroom dancers before Summer Rae became his permanent partner. She makes a big pitch to her bosses, lying about having ballet and ballroom dance experience, and then tries to bamboozle Fandango, who's a total player.

"I'm gonna shower now. I'll be thinking of you... in the shower." - Fandango. That must be Fandango's version of Fandangoing.

Oh, and apparently, Eva Marie has a boyfriend named Jonathan she never mentioned to anyone before, and Jonathan appears at her door bearing donuts and an engagement ring. And of course, Eva Marie says "Yes!" and then promptly hides the ring to have a "business meeting" which ended up in a club with Fandango. Also, she has no dancing experience. And this goes about exactly as you'd think. The appalled and aghast facial expressions by the Divas were pretty great. Stephanie McMahon personally dressed down Eva Marie with her mean face, but Eva's just lucky it wasn't Vince McMahon making her join a Very Special Club. Eva Marie got off easy.

As for the Funkadactyls, Ariane took it upon herself to get her team new sparkly lime green ring gear that Trinity was not down with. Ariane's negotiating tactics with Sandra, the WWE seamstress to tweak the outfit is highly dubious. For telling Ariane to step off, Sandra is a heroine. She should be made General Manager of RAW.

Jojo's role in the episode was basically to scoff at Eva Marie's lies, but that was still more than Natalya got to do.

Total Divas Revelation: Fandango kisses his own hand when greeting a lady.