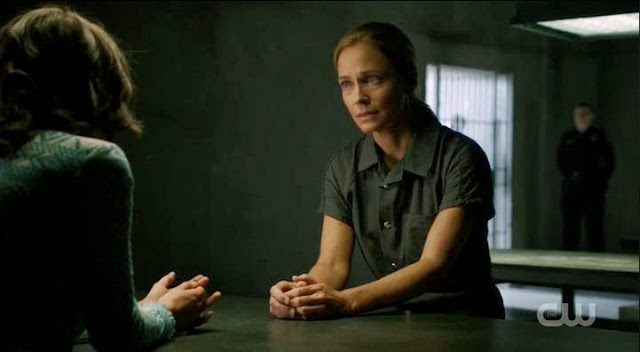 As loyal viewers of Arrow know, Moira Queen, matriarch of the Queen family and former CEO of Queen Consolidated, is behind bars in Iron Heights prison. She awaits trial for her role in "the Undertaking," the criminal conspiracy masterminded by the late Malcolm Merlyn where he used a UNIDAC machine to generate an earthquake to level the Glades section of Starling City. Over 500 people were murdered during the Undertaking.

The District Attorney of Starling City, Adam Donner, is seeking the death penalty for Mrs. Queen. The Queen family rejected an offer by Assistant District Attorney Laurel Lance to reduce the sentence to life in prison with possibility of parole. It's all or nothing for Moira Queen, with her life on the line. But what is she truly guilty of? And can the D.A. actually pin the entire Undertaking on Moira and put her in the gas chamber for it?

Here's where having a lifelong friend who is a successful attorney and an avid fan of Arrow comes in handy. I posed my lawyer friend the following question, with his compelling legal response:

First, I am hamstrung by the fact that I am not sure what she is actually charged with.  Let’s assume some kind of conspiracy to commit an act of terror, or to use a WMD, or to commit murder; as well as aiding and abetting those criminal acts.  No matter what she is charged with, we know she is guilty. That’s exactly what she did.  She conspired with The Undertaking to kill lots of people with a fucking earthquake device.

That said, does the prosecution actually have any evidence of her guilt?  Yes, there was her televised confession, but it is a well-settled legal principle that an uncorroborated confession, standing alone, is insufficient evidence to establish guilt.  So what corroborating evidence is there?  Anyone who could have testified against her is dead.  DA Donner said they have subpoenaed phone records, letters, emails etc., so I am assuming they do not currently have any documentary evidence establishing Moria’s role in the conspiracy.  And was The Undertaking stupid enough to leave a paper trail that would establish the guilt of individual members?  I just don't see how the prosecution proves its case.

That brings us to duress, or the “Malcolm Merlyn made me do it” defense.  That requires (1) that there was an unlawful and present immediate and impending threat of death or serious bodily harm to the defendant or another and (2) that the defendant had no reasonable legal alternative to violating the law. Basically, the duress defense is designed for literally a situation where there is a gun to someone’s head.  If at any point Moria could have gone to the police rather than going through with The Undertaking, then she has no defense.  The very fact that she held a fucking press conference and told the police “go arrest Malcolm Merlyn” proves that she was not under duress.  Bottom line, I don’t know if the prosecution has a case, but I do know that Moria doesn’t have a defense if they do.

Thanks to Arrow executive producers Greg Berlanti and Marc Guggenheim for hitting us back: