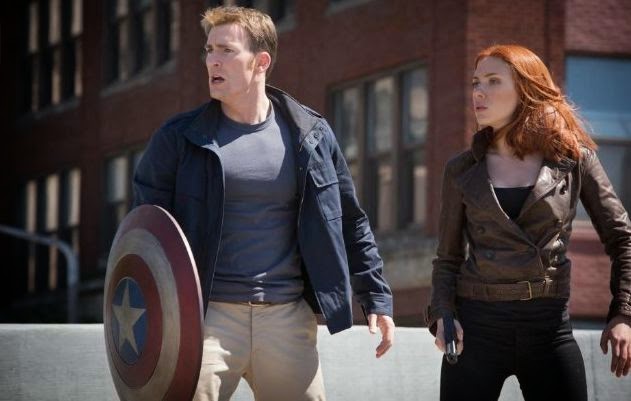 "The path of the righteous man is beset on all sides by the iniquities of the selfish
and the tyranny of evil men..." - Ezekiel 25:17
(Epitaph of Nicholas J. Fury)

At the conclusion of Captain America: The Winter Soldier, Steve Rogers (Chris Evans) has engaged in a brutal battle with the Winter Soldier, revealed to be his long lost best friend Bucky Barnes (Sebastian Stan). Grievously injured but refusing to fight Bucky any further, Rogers tosses away his shield, just as the three S.H.I.E.L.D. Helicarriers he helped disable crash into the Potomac and destroy the Triskelion, S.H.I.E.L.D.'s fortress headquarters. It's a metaphor writ large: Both Captain America and the greater Marvel Cinematic Universe have lost their shield. Though ultimately victorious, they've never been more defenseless, more vulnerable. Where do they go from here? The game has changed.

The heroic and magnificent Captain America: The Winter Soldier is indeed the game-changer for Marvel Studios. If their 2012 mega-blockbuster The Avengers was the "best comic book movie ever made," The Winter Soldier, directed by Anthony and Joe Russo, sets its ambition even higher. Transcending its superhero genre, The Winter Soldier is simply one of the finest action-thrillers made in a decade, earning a place in a lofty pantheon alongside Die Hard, Terminator 2, Lethal Weapon, and the Bourne trilogy. It's a breathtaking conspiracy-espionage-action yarn with the highest stakes and global ramifications, as Captain America, Natasha Romanov, the Black Widow (Scarlett Johansson), and Nick Fury (Samuel L. Jackson) literally have their world and their belief systems torn asunder.

Two years after the events in The Avengers, Steve Rogers has transitioned as well as he can into his new life in the 21st century. (He amusingly keeps a To Do list in his pocket of things to "catch up on" like Star Wars (or Trek), Nirvana, and Marvin Gaye's "Troubleman.")  A lynchpin operative of S.H.I.E.L.D., performing black ops for Nick Fury (though ruing being "Fury's janitor"), Rogers remains a man out of time unsure of his place in the modern era. He toys with the idea of getting out, but what would the world's first and only Super Soldier do if he wasn't fighting evil? "MMA" is the suggestion of Sam Wilson (Anthony Mackie), his fellow veteran and stalwart new friend. Indeed, in the climactic smackdown on the S.H.I.E.L.D. Helicarrier, Rogers resorts to mixed martial arts in his battle against the Winter Soldier, the terrifying assassin sent to kill Rogers and all his friends.

When Nick Fury is suddenly assassinated, Rogers finds himself as a wanted man, hunted as a fugitive by S.H.I.E.L.D. on the orders of World Security Council member Alexander Pierce (Robert Redford, as big a casting coup as Marvel Studios has ever had). Unsure of who to trust and why he's been targeted for death, Rogers gradually gathers his true allies, including Black Widow and Sam Wilson, who possesses a winged flying suit that makes him the Falcon. They go on the lam to investigate the assassination of Nick Fury by the mysterious superpowered operative known as the Winter Soldier. This leads Rogers and Natasha to delve into the darkest secrets of S.H.I.E.L.D., literally taking Steve Rogers back to his very beginnings with a multitude of callbacks to Captain America: The First Avenger. This includes a touching reunion with an elderly Peggy Carter (Hayley Atwell), Steve's lost love from the 1940's.

The terrible truth Steve and Natasha learn, true believers: Hydra, Nazi Germany's secret science division, has been part of S.H.I.E.L.D. since its inception, "a parasite" growing inside of S.H.I.E.L.D., manipulating world events to create chaos and disorder. Arnim Zola (Toby Jones), Hydra's top scientist, has become an artificial intelligence and created an algorithm to murder twenty million potential threats to Hydra's new world order. And Hydra's leader is none other than Alexander Pierce. (Redford's dying words when his plan is ultimately foiled are "Hail Hydra," a rather stunning piece of dialogue uttered by Redford. Why, Butch Cassidy and the Sundance Kid and All The President's Men should be re-edited so that Redford bellows "Hail Hydra!" in those as well.)

Luckily, Nick Fury, with the help of Maria Hill (Cobie Smulders), is alive and well. As Fury is wont to do, he has a plan to strike back at Hydra and "salvage" S.H.I.E.L.D. To Fury's chagrin, Captain America chooses to go further: He's going to take S.H.I.E.L.D. and Hydra down completely, with all that entails, and with all the ramifications inherent. Just as vital to Steve Rogers is saving his friend Bucky from the fate he's endured for 70 years as Hydra's "fist," their ghostly killer whom they cryogenically freeze and mind wipe after each mission, a fate perhaps worse than death.

What it all boils down to in The Winter Soldier are several sequences of stupendous action. From penetrating a S.H.I.E.L.D. freighter occupied by dozens of armed terrorists, a mano e mano slugfest with Batroc the Leaper (a classic comic book Captain America villain), to brutal battles against Hydra soldiers, including Crossbones (Frank Grillo), and the Winter Soldier himself, Captain America has never been more astonishingly bad ass. The fights are stunningly violent, and we truly understand just what makes Captain America the greatest warrior in the Marvel Universe. Proof positive: seeing Cap take down a S.H.I.E.L.D. fighter jet all by his lonesome.

As take no prisoners and unrelenting as Captain America is in smashing faces with his indestructible shield, he doesn't hog all of the action. The Black Widow is right there with him, zapping thugs with her electrical toys, and bludgeoning their faces with crowbars. In the air, the Falcon soars, taking out Hydra fighters left and right. Even Fury and Hill don't hesitate to pop caps in bad guys' asses. Redford's just as cruel, shooting his own housekeeper who walked in on him having a glass of milk with the Winter Soldier at his kitchen table. But all of the heroes are left with scars both psychological and physical. Captain America takes multiple bullets to the gut and nearly dies, until saved by a repentant Bucky.

Perhaps even more satisfying is the deft character work in The Winter Soldier. The quiet moments of conversation between the characters are some of the film's brightest spots, from the running gag of Natasha trying to get Steve to date one of available women in S.H.I.E.L.D. -- an obvious choice is the fetching Agent 13 (Emily VanCamp), Steve's next door neighbor posing as a nurse on Fury's orders -- to the other running gag (literally) of how Rogers can run circles around Sam Wilson. When the scope of Hydra's perversion of S.H.I.E.L.D. is revealed, it rocks Fury, Hill and Natasha's entire worldview and reasons for being.

In his third and finest outing as Captain America, Chris Evans truly embodies Steve Rogers' virtue and likability, emerging as a modern action hero audiences can believe in, a man willing to do not just what's necessary, but what's right. Sam Jackson gets more screen time than ever and makes the most of exploring the shades of complexity in Nick Fury. Sebastian Stan creates necessary pathos as well as fearsomeness as the Winter Soldier, the long suffering Bucky Barnes. But not nearly enough praise is given to Scarlett Johansson; for her third outing as Black Widow, Johansson brings it from both a physical and an acting standpoint, the embodiment of the uncertainly of being a spy in the Marvel Universe. Natasha, normally unflappable and "only pretending to know everything," suddenly realizes all the lies she's been telling for years have been Hydra's and ventures to become something more. What a hire Johansson turned out to be for Marvel.

Captain America: The Winter Soldier is a total success, balancing timely questions about the state of our world and how much freedom we are willing to sacrifice in the name of security with themes of friendship and loyalty, all braced by state of the art spectacle and Marvelous superheroics. For Marvel Studios, it's a raising of the bar; not just a home run of the highest caliber of blockbuster filmmaking but a bold game-changer, a statement that they're playing a different and better game than everyone else. In a similar way to how Christopher Nolan pushed Batman beyond the comic book movie genre into something Oscar-caliber in The Dark Knight, The Winter Soldier emerges as Marvel's new statement of the quality of films they are now capable of making, while still actively expanding the Marvel Cinematic Universe with mentions of "Stephen Strange" and teases of the Scarlett Witch and Quicksilver in next year's Avengers: Age of Ultron. The Winter Soldier, with its prominent role for S.H.I.E.L.D./Hydra agent Jasper Sitwell (Maximiliano Hernández), also upends the status quo of television's Marvel's Agents of S.H.I.E.L.D. with potentially exciting results. Things are changing in the Marvel Universe, and it's only fitting Captain America leads the way.

The ultimate revenge of #TheWinterSoldier would be if he stole the notebook from @CaptainAmerica's pocket and did his To-Do list before Cap.
— John Orquiola (@BackoftheHead) April 5, 2014 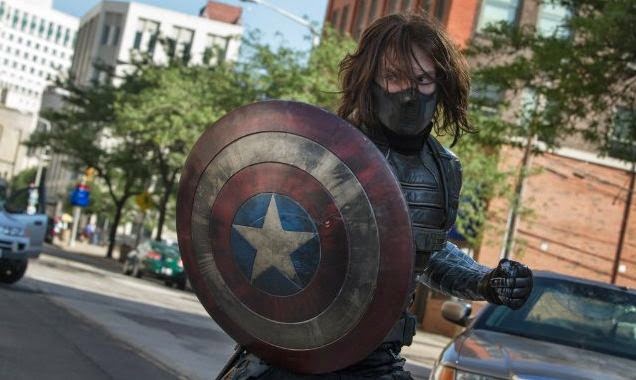