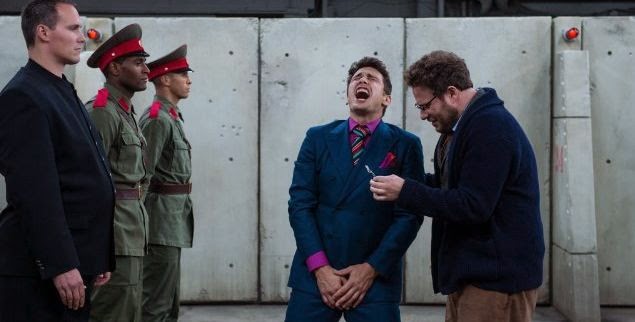 This is the movie that caused all that ruckus? North Korea must really hate parodies of Frost/Nixon crossed with The Hangover. In The Interview, a ribald, forehead-slapping fantasy of espionage and stupidity, dunderheaded talk show host Dave Skylar (James Franco) and his slightly more competent but still idiotic producer Aaron Rapaport (Seth Rogen) are granted the interview of a lifetime with North Korean dictator Kim Jong-un (Randall Park). The CIA, represented by the fetching Agent Lacey (Lizzy Caplan), a real honeypot, coerce Rogen and Franco into assassinating Kim. What transpires is shamelessly racist and insulting to both the United States and North Korea, were it not also peppered with some big and genuine gross-out laughs and unbelievable yet admirable nerve from Rogen, Franco, and director Evan Goldberg (This Is The End is their previous collaboration).

The Interview takes what little the Western world "knows" about North Korea's secret totalitarian dictatorship (the people are starving, they have nuclear weapons, Kim Jong-un claims he's a god who doesn't urinate or defecate) and crafts the obvious go-for-broke jokes about it all. Rogen and Goldberg also wink wink with having Franco describe how the movie will end and then follow through with that exact series of events beat for beat. They also draw laughs from skewering some of the most famous stars in America: Rob Lowe's "secret baldness" and Eminem's "true" sexuality are in on the joke, but the vaginas of Nicki Minaj ("brown sugar") and Miley Cyrus ("moose knuckle") are trampled on for cheap yuks. Franco emerges from the fracas relatively unscathed, though Rogen suffers multiple indignities including having to shove a metal missile up his ass and losing a couple of fingers in a bloody shoot out. But no one gets it worse than Kim Jong-un.

The best moments in The Interview are when Franco and Kim Jong-un bond over margaritas, women, booze, and ride around in a tank blowing up trees. (The tank was given to the Kim family by Stalin, which Franco insists is pronounced "Stallone.") The gullible Franco still manages to root into the secret pain Kim harbors over his late father Kim Jong-Il. But is Kim really a misunderstood, okay guy or is he an insane liar all along? Is he really just honey dicking Franco? The Interview has it both ways and gets away with it, and it also gets away with a ludicrously violent comeuppance and end to Kim Jong-un. Frankly, if Jennifer Lawrence singing "The Hanging Tree" in The Hunger Games: Mockingjay, Part 1 can become a radio hit, so should James Franco singing Katy Perry's "Firework." In the end, Katy Perry comes off as the biggest winner of all in The Interview. If only Franco, Rogen and Perry were around during World War II. They'd have taken out Hitler and spared millions of lives. Seth Rogen, James Franco, and Katy Perry would have been the Greatest Generation. But maybe they already are.
Posted by Back of the Head at 9:02 AM