The Living Manifestation of Destiny

Nine years ago, I disavowed Mission: Impossible. Today, I believe in Ethan Hunt more than ever. Tom Cruise returns for his fifth Mission in 19 years as the ageless, indomitable secret agent Ethan Hunt in writer-director Christopher McQuarrie's Mission: Impossible - Rogue Nation, a slam-bang, globe-trotting tour de force about friendship, loyalty, and the elevation of Ethan Hunt to mythical status. Like Roger Moore's James Bond in the 1970s, Ethan Hunt is the most famous secret agent in the world, a rock star among spies. "There are stories," a fetching young female agent says to the legend himself upon meeting him. Young lady, you wouldn't believe the half of it, Hunt's wry smile seems to say. By now, Ethan Hunt simply can't be stopped, and McQuarrie's Mission smartly weaves Hunt's forehead-slapping invincibility into the narrative. This is never more apparent when one of Hunt's greatest detractors, Alec Baldwin, the new head of the CIA who seeks to dismantle the Impossible Missions Force, is forced to sing Hunt's praises to the British Prime Minister whom Hunt is about to abduct: "He's a gambler... He can become anyone. He's immune to all counter measures. He is the living manifestation of Destiny." Even 007 can't claim such laurels.

Hunt, of course, doesn't quite see himself as others see him. Or if he does, he's simply too modest to say. There are times when it seems like he forces himself to be the superhero everyone believes him to be, in spite of himself. Once again, Ethan is reunited with his IMF besties, Simon Pegg, Ving Rhames, and Jeremy Renner, all of whom he gave Ethan's Special IMF Besties iPhones to at the conclusion of the previous Mission, Ghost Protocol. (Paula Patton, who received the fourth Bestie iPhone, is never mentioned.) All three of Ethan's besties spend much of Rogue Nation debating Ethan's motives and even his sanity at times - Ethan has never quite been so obsessed and occasionally unhinged as he is in Rogue Nation - but one thing they never question is Ethan's ability. Ethan can do anything; Pegg is so certain of it he doesn't for a moment believe Ethan can't hold his breath for over three minutes to perform an "impossible" mission inside a water tank. "Difficult, yeah, but not impossible." Ethan's closest allies see him as an action figure that can weather any abuse, to Ethan's chagrin. But he still does it all unquestioningly. After nearly drowning and being resuscitated, Ethan is never quite as endearing as he is all punch drunk but still not hesitating for a second to engage in a car chase and motorcycle chase. Unlike Bond or Jason Bourne, who primarily work solo, Ethan is reliant on his team, and looks out for them. When he recruits Pegg into his schemes and tries to give him an out after things go FUBAR, Pegg rejects the very idea of abandoning Ethan on the sole basis of his unwavering friendship. Ethan is genuinely touched.

In Rogue Nation, Ethan and the IMF are once more disavowed and on the hunt (pun unintended) for the Syndicate, which was introduced in the closing seconds of Ghost Protocol. The Syndicate, led by thin-lipped British mastermind Solomon Lane (Sean Harris), are a covert black ops terrorist organization, "a rogue nation, an anti-IMF." (We get it. Easy on the sell job, fellas.)  The CIA believes the Syndicate are a figment of Ethan's imagination, but the IMF know better, because the IMF always knows better. Rogue Nation weaves in recent tragedies like missing Malaysian flights and nuclear meltdowns and lays the blame squarely at the feet of the Syndicate. They're always one step ahead of Ethan Hunt, which drives Ethan as crazy as we've ever seen him. A direct sequel to Ghost Protocol referencing the nuclear missile attack on San Francisco the IMF foiled, Rogue Nation also pleasantly calls back to previous Missions, with a blatant flaunting of a rabbit's foot and Baldwin referring to Ethan's theft of the NOC list in the original Mission as occurring in his first year in the CIA. Rogue Nation also introduces the most formidable and intriguing female character in franchise history, Ilsa Faust (Rebecca Ferguson), a show-stealing, ass-kicking disavowed British Secret Service agent who alternates from Syndicate operative to Ethan's ally. There's never really a question who's side she's ultimately on, and it takes a tremendous contortion of logic why the Syndicate never kills her considering how consistently she betrays them in favor of Ethan, but Ferguson is magnetic, more than a match for Ethan Hunt.

McQuarrie delivers the awesome international spectacle Mission: Impossible demands, from a bravura opening airplane heist in Belarus, with Cruise seemingly hanging onto the outside of a cargo plane taking off by his fingertips, a virtuoso, acrobatic action set piece involving three assassins in an opera in Vienna, to a relentless, next-level motorcycle chase in Casablanca outdoing the tremendous car chase in McQuarrie and Cruise's previous collaboration, Jack Reacher. Surprisingly, instead of upping the ante by going balls-out in the London-based third act, McQuarrie takes the opposite tack, going smaller and making the resolution of Rogue Nation about the characters and the personal vendetta between Ethan Hunt and Solomon Lane, literally concluding in a glass box. Ethan doesn't even climb and jump off of any ridiculously tall buildings in this movie! On the line isn't so much the fate of the world as the fates of Pegg, Ethan's best friend, and Ferguson, a woman caught in an impossible situation. More than anything, loyalty and friendship drives Ethan Hunt in Rogue Nation. When it comes to his friends, Ethan Hunt admirably proves nothing is impossible. 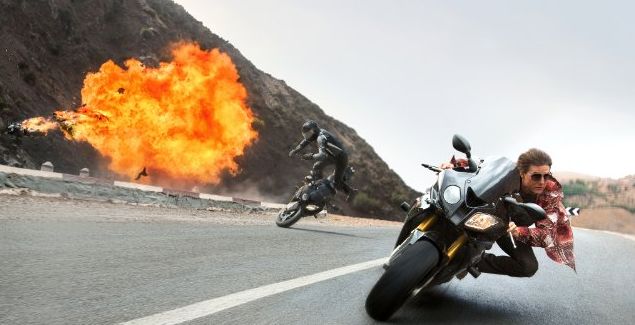