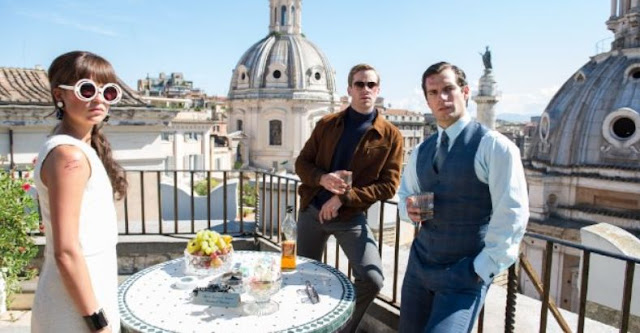 ** SPOILERS **
"America teaming up with Russia? That doesn't sound very friendly," quips Gaby Teller (Alicia Vikander), a German mechanic who finds herself rescued from East Germany by dashing American super spy Napoleon Solo (Henry Cavill)  in the opening gambit of Guy Ritchie's The Man from U.N.C.L.E. Indeed, it isn't, at least for a while. Napoleon and Teller find themselves immediately stalked by KGB operative Illya Kuraykin (Armie Hammer), who's practically the Soviet version of the Terminator, able to tear the trunk door of a car with his bare hands. Napoleon and Illya, two sides of the Cold War coin, soon find themselves on the same side, working together to prevent an Italian criminal organization from acquiring a nuclear warhead.

With The Man from U.N.C.L.E., Ritchie returns the spy genre to its sexy, stylish heyday, the glamorous 1960s. Able to cut loose from being an earnest, square jawed Man of Steel, Cavill has a ball as Napoleon Solo, a former master criminal recruited for 15 years by the CIA as their finest and, frankly, most ridiculously handsome agent. The suave, unflappable Solo, who wears a three piece bespoke suit like there's no tomorrow, has a taste for womanizing and the finer things in life, and is the polar opposite of Hammer's Illya, a stern Russian soldier accustomed to submerging his feelings and humanity at the behest of his Soviet masters.

Some of U.N.C.L.E.'s best moments involve the Cold War's best new frenemies, Napoleon and Illya, verbally jousting and taunting each other about one of their most basic similarities, that both super spies have "their balls tied by a short leash" by their respective masters. Vikander is a fetching, smoky-voiced mystery woman, keeping her cards close to her vest, but U.N.C.L.E.'s greatest scene stealer is Elizabeth Debicki as the villain of the piece. Debicki is smashing, giving us a glimpse of what it would have been like if Audrey Hepburn played a criminal mastermind ready to blackmail the world with nuclear weapons.

The Man from U.N.C.L.E. is also a curious inferno of fake accents, with Englishmen Cavill and Jared Harris sporting American accents and Hammer rasping with a Russian tongue. Though playing an East German, Vikander sports her real Swedish accent, and Hugh Grant, as the British spymaster Waverly, couldn't abandon his British accent if he tried. Enjoyable action, swaggering secret agents, gorgeous women, stunning cars, jaunts through Berlin, Rome, and the Mediterranean, and a classic elegance not seen in a spy movie since Sean Connery was 007 marks The Man from U.N.C.L.E. as sexy, frothy, engaging entertainment.
Posted by Back of the Head at 4:32 PM