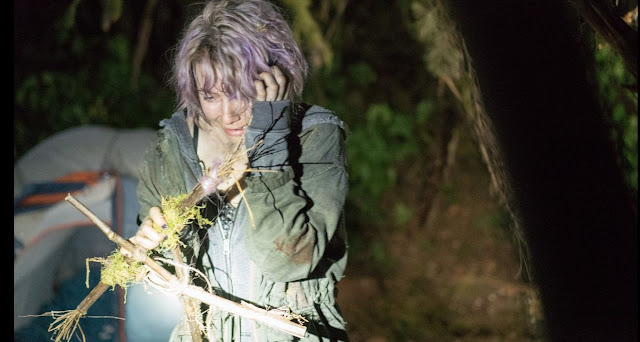 Say fifteen years ago (in movie time, seventeen years ago in real life time), your sister set off with two friends into the forbidding Black Hills Forest of Burkittsville, Maryland to film a documentary about the fabled Blair Witch. They all disappeared. After an extensive manhunt, their footage was later found, which, if watched, argues pretty conclusively that 1) they are dead and 2) going into these woods to film a documentary is a very, very bad idea. Would you A) leave well enough alone, or B) go into those same woods with your friends and also film a documentary? All it takes for James Allen McCune is for a blurry reflection in a cracked mirror that could maybe possibly be but probably in all likelihood isn't an image of his missing sister Heather Donahue to be found within her unearthed footage to get him to pack up his buddies and head off to meet the Blair Witch. His sister could still be out there, he reckons. Fifteen years later? What does McCune really expect to find? Best case scenario she's living underground in an Unbreakable Kimmy Schmidt situation. In all likelihood, she's dead. But no, this Blair Witch foolishness runs deep in the family blood.

Blair Witch treads the same haunted ground as the original The Blair Witch Project, the 1999 phenomenon that kickstarted the found footage horror movement. Treads it far too closely. When they arrive in Burkittsville, McCune and his friends, filmmaker Callie Hernandez, skeptical Brandon Scott and his girlfriend Corbin Reid, meet up with a couple of shady locals, Wes Robinson and Valorie Curry, who are all too willing to lead this Scooby Gang into the woods and plow them with the spooky local legend of the Blair Witch. After spending a largely uneventful night camping, mistrust is sown within the group when a bunch of stick figures of the Blair Witch's logo are found all over their camp site. Things get worse in a hurry: Reid's foot is injured and she's stricken with a mysterious illness. The Scooby Gang walks the woods for a full day looking to escape only to wind up right back at their campsite. Robinson and Curry are banished from the group, blamed for planting the stick figures as a hoax, but they reappear later that night claiming it's been five days since they'd last seen them. Then everyone starts dying (the Blair Witch doesn't buck horror movie tradition and kills the black guy first), as the unseen Blair Witch attacks them all in an endlessly dark and stormy night.

The Scooby Gang entered the woods to make their documentary armed with the latest technology: ear mounted HD cameras, iPhones, GPS tracking devices, and even a drone. Against the supernatural Blair Witch, all their technology fails them (the drone turns out to be particularly useless all around). Similarly, technology failed Blair Witch. The power of the original Blair Witch Project lay in its stripped down simplicity; it felt like the cheap, no-budget documentary assembled from disparate footage it was purported to be. Its raw straightforwardness enhanced the creepiness of being lost in the woods, stalked by an unseen force. Director Adam Wingard achieves some effective atmosphere early on -- the moment when Reid snaps a Blair Witch stick figure and Curry collapses in a manged heap is a standout -- and the ladies in the cast, Hernandez, Curry, and Reid are game to be scared like visitors to Universal Studios Halloween Horror Nights, but Blair Witch's self-conscious camera work and editing cuts the suspension of disbelief and nullifies the intended verisimilitude.

We are told on the outset the footage we are watching was assembled from footage found in the Black Hills, but whoever edited this footage decided to cut it like a standard horror movie, complete with bludgeoning sound effects. By the time McCune and Hernandez come upon the dilapidated cabin of the Blair Witch, their mad dash into the cabin and fatal final encounter with the Blair Witch drags on and on with ear-splitting hysterics. A rehash of the chilling signature shot of the original of a man standing in the corner achieves no impact during the relentless cacophony of the final sequence. One of the new intriguing new ideas not beholden to the original was the cut on Reid's foot, which turned out to be a thoroughly missed opportunity. We are teased with the possibility of a creature or a manifestation of the Blair Witch growing inside of her, but instead, she just ends up pulling some sort of slug from her leg before the Blair Witch does her in. And how about that Blair Witch, huh? She's really into her own branding, what with the dozens of stick figures she puts together to scare campers. The Blair Witch should just set up shop on the side of the road and sell her stick figure logos to tourists, make some ca$h. Ultimately, Blair Witch proves you can't teach an old witch new tricks.
Posted by Back of the Head at 7:54 PM