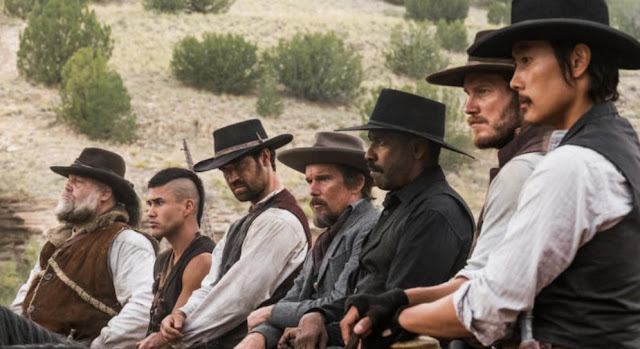 The Magnificent Seven reunites the stars and director of Training Day, Denzel Washington, Ethan Hawke, and Antoine Fuqua, in a rootin'-tootin', shoot-em-up remake of The Three Amigos. The Magnfi -- what's that? Yul Brenner? Steve McQueen? There was a previous Magnificent Seven? Wait, what? The Seven Samurai? Akira Kurasawa? Are you sure? Huh. Well, okay. Let's start again.

The Magnificent Seven reunites the stars and director of Training Day, Denzel Washington, Ethan Hawke, and Antoine Fuqua, in a rootin'-tootin', shoot-em-up remake, transplanting all of the action to the Old West mining town of Rose Creek, which is under duress from scheming robber baron Peter Sarsgaard. Sarsgaard plays Bartholomew Bogue, the most evil man in 1873, who rolls into Rose Creek with a private army, takes over the gold mining operation, and threatens to kill everyone in the town if they don't accept his offer of $20 for their plots of land. He burns down their church and makes a bloody example of some of the townsfolk, including Matt Bomer, the husband of Haley Bennett. Looking for revenge, Bennett gathers up "all she has" in gold coins and sets off to hire as many bad ass movie star gunslingers as she can afford. She can thank her stars and garters she found Denzel.

Denzel is excellent as Sam Chisolm, a duly sworn bounty hunter and evidently the fastest gun in the West, who gets real interested when he hears the name Bart Bogue. Denzel and Bennett recruit Chris Pratt, stepping into the Steve McQueen role, as Josh Faraday, a comedic magician cowboy, but deadly. Together, Denzel and Pratt bring in Ethan Hawke as Goodnight Robicheaux, the best shot with a rifle in the Civil War, Vincent D'Onofrio as Jack Horne, a legendary frontiersman, Manuel Garcia-Rulfo as Vasquez, an honorable Mexican bandito, and two guys competing for the coolest minority of the Seven, Byung-hun Lee as knife-wielding Chinese bad ass Billy Rocks, and Martin Sensmeier as heart-eating Comanche killer Red Harvest. The screenplay by True Detective creator Nic Pizzolatto and Richard Wenk, has fun bringing the Magnficent Seven together, landing some ribald jokes as these dastardly guns for hire bounce off each other. Denzel and Hawke wink at their prior collaboration by playing old friends, Pratt goes after Garcia-Rulfo with some off color teasing for being Mexican, but no one is aiming for any particular depth in their characters. The Magnificent Seven plus Bennett and Saarsgard's pure movie star charisma are the nine bullets in Fuqua's chamber.

Once the Magnificent Seven arrive in Rose Creek, our heroes quickly roust Sasgaard's remaining forces from the town in a show of force and spent the seven days until Sarsgaard returns with his army to prepare the townspeople for war. There's some comedy in the ineptitude of some of the towns folk in trying to shoot, but otherwise, the last act of The Magnificent Seven is a straight-forward, ultra violent, melee of gun blazing, men being shot off horses, wild charges blown to smithereens by dynamite, and the most fearsome weapon of the 19th century, a gatling gun, ripping the town and most of the characters to shreds. Denzel and Sarsgaard have a final confrontation that turns out to be very personal, indeed. After saving tween Dakota Fanning in Man on Fire and teen Chloe Grace Moretz in The Equalizer, for once Denzel turns out to need saving by the white girl in his movie. It's a neat twist to see Haley Bennett bail Denzel's ass out of a jam. Not all of the Magnificent Seven make it out of The Magnificent Seven alive, but this able remake on the surface provides enough gun-totin' entertainment  to corral the audience's rooting interest and earn the classic theme music finally playing over the closing credits as we all ride off into the sunset.
Posted by Back of the Head at 6:50 PM