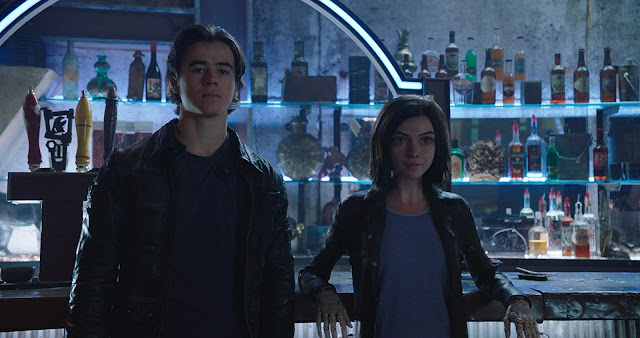 Roger Ebert's review of Batman (1989) begins: "The Gotham City created in “Batman” is one of the most distinctive and atmospheric places I’ve seen in the movies. It’s a shame something more memorable doesn’t happen there." The same applies to Iron City in James Cameron and Robert Rodriguez's Alita: Battle Angel, one of the more vividly realized, dystopic sci-fi futures in recent years where not a whole lot that's memorable occurs - unless you like roller derby. Alita: Battle Angel is a sci-fi action fantasy meant for 12 year olds with a script that unfortunately feels like it was written by a 12 year old. Oh, they killed a dog in the movie. That sucked. The dog was the first friend Alita (a brilliant voice and motion capture performance by Rosa Salazar) made but unlike John Wick, she doesn't go hell-bent on revenge because the dog was killed. Wick 1, Alita 0.

Based on the anime Battle Angel Alita (never read it), Alita begins not unlike how Homer Simpson found out he was Mr. Sparkle in Japan: a kindly old inventor named Dyson Ido (Christophe Waltz) finds the core (head and torso) of a cyborg lady intact in a junkyard. He fuses the core to the robot body he built for his dead daughter Alita and voila, our heroine is born. Alita has no memory of who she is unless she finds herself in action hero scenes where she ends up fighting cyborgs; fortunately, this happens to her a lot. Alita also falls for literally the first boy she meets, Hugo (Keean Johnson), a dude who jacks the parts of cyborgs who were still using those parts and sells them to Vector (Mahershala Ali), the evil entrepreneur who runs Motorball, the most popular extreme sport in Iron City, which is populated mostly by cyborgs. Having seen Alita, it's easy to see where James Cameron jacked many of the concepts of his Jessica Alba-led TV series Dark Angel, including the unbeatable heroine, someone communicating through "eyes only", and how everyone who lives street-level is into extreme sports.

Alita requires a shit ton of exposition and the movie only partially obliges: After the Fall 300 years ago, which was a great war between Earth and Mars, all of the sky cities fell except for Zalem, which hovers above and drops its trash down to Iron City. Once you leave Zalem for whatever reason, you can never go back, unless you become Motorball Grand Champion? Huh? And wait, so the people on Mars were the heroes but lost the war to the people of Earth, even though the Sky Cities fell? Is there only one city left on the whole planet? Anyway, lots of people want to get up to Zalem because it's apparently super nice up there, including Hugo  and Dr. Chiren (Jennifer Connolly), Dyson Ido's ex-wife who now builds Motorball cyborgs for Vector, and I guess sleeps with him too sometimes. As for Alita, she begins experiencing memory flashes of fighting in wars under the designation Number 99, but apparently, there's no Internet or records or books about what happened. Seriously, did no one record the events of the most important war in human history? Is there no library in Iron City?

In order to get with Alita, Hugo and his friends Tanji (Jorge Lendeborg, Jr, who was Memo in Bumblebee) and Kojomi (Lana Condor from To All The Boys I've Loved Before) take the cyborg outside of Iron City into a crashed Martian ship out in the boonies. Alita dives right into the lake and finds an upgraded cyborg body meant for her; finally, Dr. Ido helpfully explains that this is a Berzerker shell and Alita was once a Berzerker - the most advanced weapon ever built. Wait, so she's 300 years old and that ancient tech is more advanced than anything in Iron City or Zalem? No matter, as Alita is destined to be fused into her Berzerker body after her old body is destroyed in a fight with Grewishka (Jackie Earle Haley), a hulking cyborg sent to kill Alita by Nova, the real villain of the story (who I guess we'll get to... someday? If there's a sequel? Maybe?)

Most of Alita's story spans just a few days and in that time, Alita and the film itself struggle with finding something for our cyborg heroine to do. Is she dedicated to finding about her past? Kinda, but in fits and starts. Does she want to be a bounty hunter like she discovers Ido is? Kinda. Okay, the idea that Dr. Ido, an old man with no robot parts, is some kind of effective bounty hunter because he carries a giant laser ax is the most far-fetched thing in this far-fetched movie. Alita's sure about one thing: she's a murderbot who wants to be a lovebot to Hugo (the movie completely dances around whether Alita's cyborg body comes with the necessary... parts). All Hugo wants is to get to Zalem (and not tell Alita about the whole jacking cyborg parts for money thing), so Alita decides to be a good girlfriend and become Motorball Champion so that she can earn the money Hugo needs to buy his way into Zalem. This is when Alita veers into The Phantom Menace territory, if the whole point of Star Wars: Episode I was the Podrace. Lots of cyborgs in Motorball try to kill Alita and one expects Sebulba to show up and join in.

Ultimately, it turns out Alita is like Unbreakable, the first act of a larger story, but unlike M. Night Shyamalan's trilogy, Alita may not spawn the necessary sequels so maybe they should have just gone balls out with this one instead. The film ends with a tease of what's to come and Alita never makes it to Zalem to fight Nova, who somewhat hilariously is revealed to be Edward Norton. The best thing in Alita turns out to be the thing that seemed to be the most problematic on the outset: Uncanny Valley Girl. Thankfully, Alita and Rosa Salazar's performance are excellent. Her huge, expressive anime eyes, the way Alita's smile has a little bit extra gum just like Salazar's, and her fighting abilities turn out to be amazing. The single best scene in Alita is the bar scene when, newly christened as a bounty hunter, she goes to recruit other bounty hunters with a Braveheart-like rally speech and beats the crap out of Zapan (Ed Skrein), a cocky, sleazy cyborg who carries a big laser sword, which Alita takes. "That bitch broke my nose!" Zapan yells. "Yes I did," Alita cooly replies. That moment was the high point of Alita: Battle Angel, which sadly never ramps up to be more than the sum of its cybernetic parts. On the plus side, the movie does call Alita "Battle Angel" so since they said the title of the movie, four stars.
Posted by Back of the Head at 7:37 AM