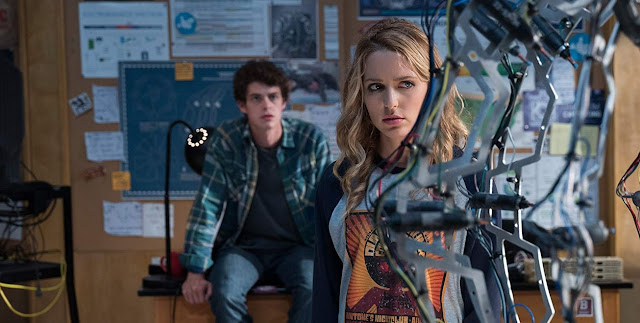 Happy Death Day 2U name checks Back to the Future Part II (which Tree Gelbman hasn't seen, just as she never saw Groundhog Day or knows who Janis Joplin is), but let's get even kinder (and crazier): Happy Death Day 2U is The Dark Knight of the Happy Death Day franchise. That sounds ridiculous until one considers the key element the two sequels have in common: escalation. Like the second Christopher Nolan Bat film, director Christopher Landon's sequel goes bigger - far bigger - with loftier ideas that raise the stakes and invents a terrific new scenario while also cleverly using the existing cast of characters in amusing new ways. Rather than just rehashing the premise of the original Happy Death Day, Tree (Jessica Rothe) finds herself in a brand new, more complex situation where she deals with a new twist on her old problem while coping with an even bigger problem. And, as Tree is wont to do, she rises to the occasion to save the day (that won't end).

Picking up exactly where Happy Death Day left off - Tuesday, September 19th - the sequel wastes no time explaining the one thing the original (or Groundhog Day, for that matter) didn't: what caused Tree's time loop in the first place? The answer is Sisy, also known as the Sisyphus Quantum Generator, a device Tree's boyfriend Carter's (Israel Broussard) roommate Ryan (Phi Vu) was working on the whole time Tree was reliving the same day. Sisy was built to slow down time but instead, it created the time loop. Sisy is also the cause of the rolling blackouts plaguing Bayfield University and that mean ol' Dean Bronson (Steve Zissis) wants to pull the plug on it. Meanwhile, Ryan is being stalked and murdered by his own Babyface Killer and finds out he's caught in a time loop himself. Luckily, Tree isn't just a fine vagine, she's the world's foremost expert on fighting a serial killer while being caught in a time loop. They quickly beat the Babyface Killer and the movie hits us with its first shock: it's a doppelganger of Ryan from another dimension. Then the second shock: Sisy overloads, sends Tree back into a time loop, and it's September 18th again, but now with the ingenious twist: Tree's not just caught in a time loop but she's also in a parallel universe.

After a quick explanation of the Multiverse theory (the Happy Death Day universe only has 6 dimensions vs. the DC Universe's 52), Happy Death Day 2U has loads of fun tweaking Tree's life in the mirror universe. Here, Tree's roommate Lori (Ruby Modine), who was the Babyface Killer in the original film, is alive and has no murderous intentions towards her because in this universe, Tree isn't sleeping with Dr. Gregory Butler (Charles Aitken). However, Lori is now the target of the new Babyface Killer so instead of repeating the gimmick of Tree being murdered, HDD2U has a blast showing Tree inventing new ways to commit suicide in order to reset the time loop and keep saving Lori. Tree kinda wants to die anyway since in this reality, Carter is dating Danielle (Rachel Matthews), Tree's mean girl sorority sister.  But the biggest complication for Tree is that in this universe, her mother (Missy Yager) is alive, which elevates HDD2U's moral conflict. Tree has to choose between staying in this dimension where she still has a mom versus returning home and being with Carter.

In Happy Death Day, Tree being forced to live the same day repeatedly made her come to terms with the fact that she stopped being a good person after the loss of her mother. In HDD2U, Tree grows even more as a person when she's faced with the fact that she doesn't belong in this reality (her mother has three years of memories with the alternate Tree that our Tree doesn't have) but giving up this reality means losing her mother all over again. Meanwhile, Tree still finds the time to save Lori by hunting down and learning the true identity of the new Babyface Killer AND she spends her time loop mastering quantum physics so that Ryan and his two science nerd cohorts Samar (Suraj Sharma) and Dre (Sarah Yarkin) can repair Sisy and send Tree back to her proper dimension. Truly, there is nothing Tree can't do.

Through it all, Happy Death Day 2U is anchored by the superheroic lead performance of Jessica Rothe, who effortlessly transitions between horror, drama, exasperation, panic, zany comedy, desperation, gleeful suicide, homicidal rage, heartfelt love for her mom, and every other emotion a person can experience living the same 24 hours over and over. (Tree actually belongs on the Waverider saving the multiverse with DC's Legends of Tomorrow.) Overall, Happy Death Day 2U is a miraculous triumph and does everything a sequel is supposed to do with aplomb. HDD2U is an escalation of everything in the first movie: bigger, smarter, crazier, funnier, and even more emotional - just like The Dark Knight, a movie Tree, no doubt, has never even heard of.


Click Here For My Detailed Breakdown of Happy Death Day 2U's Ending, Time Loops,
Multiverse, and Everything Else Explained at Screen Rant
Posted by Back of the Head at 8:35 AM