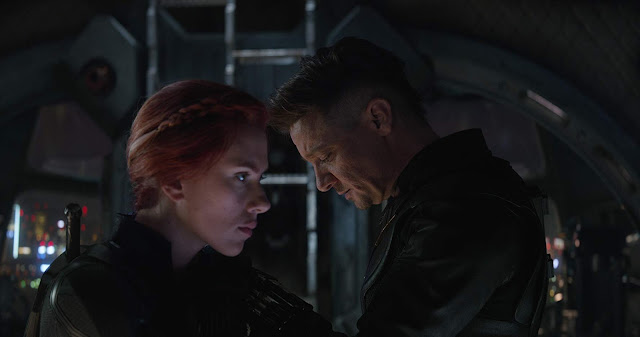 "Whatever it takes" is the never-say-die mantra of Joe and Anthony Russo's Avengers: Endgame, the 22nd film and the pinnacle of the Marvel Cinematic Universe. What it takes, to echo a victorious Thanos (Josh Brolin) in Avengers: Infinity War, is everything... and everyone. Faced with their greatest defeat and the deaths of trillions - half of all life in the universe wiped out by a snap of Thanos' Infinity Gauntlet-wearing fingers - the surviving Avengers regroup and take the fight to Thanos. Their hope is to use the Infinity Stones to bring everyone back. Not all of the Avengers make it through. But over the course of a fluidly-paced 3 hours and 2 minutes, the titanic and unprecedented Avengers: Endgame brilliantly subverts expectations, crescendos, and brings the first 11 years of the Marvel Cinematic Universe to a magnificent and beautiful conclusion while never losing focus on these characters we've come to love so much.

Avengers: Endgame is essentially four movies in one. Picking up 23 days after Infinity War, the Avengers are smarting from their loss. When Captain Marvel (Brie Larson) rescues Tony Stark (Robert Downey, Jr.) and Nebula (Karen Gillan), who were stranded in space, and brings them back to Earth, the Avengers set out to lay the smackdown on Thanos at his "retirement home" on a planet called the Garden. But again, they are too late: Thanos destroyed the stones and not even Thor (Chris Hemsworth) aiming for the head with his magical ax can set this right. The Avengers lose again and that's that. Five years later, Endgame picks up with a spin on HBO's The Leftovers as the heroes and the human race cope with their new reality. Tony Stark moved on and he has a precocious daughter now. But some Avengers like Natasha Romanoff (Scarlett Johansson) just can't. Others, like Thor, just give into despair and let themselves go. Suddenly, the tiniest, most impossible shred of hope arrives when Ant-Man (Paul Rudd) shows up at the Avengers' door with the craziest of crazy schemes: a time heist - travel back in time and collect the Infinity Stones before Thanos can and then use the Stones to bring everyone back.

The time heists are the centerpiece of Endgame and they brilliantly (and confusingly so don't think too hard about it - Back to the Future this ain't) take Steve Rogers, Tony Stark, Thor, Natasha Romanoff, Nebula, Scott Lang, the Hulk (Mark Ruffalo), Clint Barton (Jeremy Renner), Rocket (Bradley Cooper), and James Rhodes (Don Cheadle) back to key moments of past MCU movies to nab the Stones. Rogers, Stark, Lang, and Hulk arrive in New York City 2012 at the aftermath of The Avengers to collect the Space, Mind, and Time Stones, which were all in NYC at that exact moment in time. Nebula and Rhodey go to Morag to the moment when Star-Lord (Chris Pratt) first stole the Power Stone in Guardians of the Galaxy. Rocket and Thor go to Asgard to steal the Reality Stone, which is imbued in the body of Jane Foster (Natalie Portman) during Thor: The Dark World. And Barton and Romanoff travel to Vormir, 4 years before Thanos would trade the life of his daughter Gamora (Zoe Saldana) for the Soul Stone, both unaware of the rules of how to gain the Soul Stone means one of those Avengers isn't coming back.

The chaos that ensues during the time heists is simply ingenious, filled with numerous moments that connect to other MCU movies like Ant-Man and Captain America: The Winter Soldier. Stark and Lang hilariously fail to get the Space Stone, which means Steve and Tony have to call an audible and make a side time heist to a secret SHIELD base in the 1970s where they both encounter younger versions of Tony's father Howard Stark (John Slattery) and the love of Steve's life, Peggy Carter (Hayley Atwell), who is also joined in a cameo by her Agent Carter co-star Jarvis (James D'Arcy). There's also a brilliant nod to the controversial Nazi Captain America story in recent Marvel Comics when two Steve Rogers from two different time periods fight after the future Steve pretends he's a member of Hydra. Meanwhile, in 2013, Thor gets to heal some of his broken heart by seeing his mother Frigga (Rene Russo) one last time. And, in 2014, the younger versions of Thanos, Gamora, and Nebula find out that the future Nebula is trying to steal the Power Stone. Even more malevolent in 2014, Thanos is cursed with knowledge of his ultimate success in the future and he decides to get that big win now; Thanos manages to pull off a time heist of his own and arrives five years later to lay waste to Avengers headquarters and mount a full-scale invasion of Earth.

It's shocking to realize that the epic battles that closed out Infinity War were merely a drop in the bucket compared to Endgame's finale, which matches and even outdoes anything seen in Star Wars or Lord of the Rings for sheer spectacle. The Avengers use the Infinity Gauntlet to bring back... everyone... and during the melee, the resurrected superheroes like Scarlet Witch (Elizabeth Olsen), Spider-Man (Tom Holland), Doctor Strange (Benedict Cumberbatch), and Black Panther (Chadwick Boseman) all get important bits of business to play keep-away with the Infinity Gauntlet, fight Thanos, or both. In addition, other heroes like the Wasp (Evangeline Lilly) finally get to fight alongside the Avengers when Captain America, at long last, utters the rallying cry, "Avengers Assemble!" But the most important and fitting rallying cry of all is by Tony Stark himself, who started all of this when he uttered: "I am Iron Man!" Stark says it once more, pulling a rabbit out of a hat and placing the crowning touch on the story of the Marvel Cinematic Universe.

Avengers: Endgame is a miraculous achievement by all involved - and just about everyone who was part of this Marvel Studios journey was involved. The film smartly gives focus to some characters, like Clint Barton and Scott Lang, who didn't get to play a role in Infinity War, it honors Natasha Romanoff (and Scarlett Johansson) as the unsung soul of the Avengers, and it offers a fitting new beginning for Thor and the Guardians of the Galaxy, but most of all, Endgame gives sweet closure to the two pillars of the Marvel Cinematic Universe: Chris Evans' Steve Rogers and Robert Downey, Jr.'s Tony Stark. Captain America and Iron Man broke the Avengers apart in 2016 but together they get to go out as friends, brothers, and legends who will never be forgotten. Avengers: Endgame is a glorious celebration of these characters, their love for each other, and our love for the single greatest cinematic universe that defines a generation. Our world is bigger and better thanks to the Avengers, who will continue on to teach our grateful universe about sacrifice, family, and that we can be the best version of ourselves if we do whatever it takes.
Posted by Back of the Head at 11:01 AM