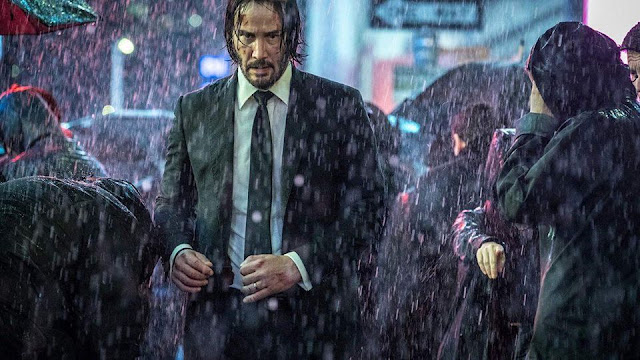 
The best line in John Wick: Chapter 3 - Parabellum is spoken to John Wick (Keanu Reeves) by the Elder (Saïd Taghmaoui): "I've never seen anyone fight so hard to end up right back where he started!" The Elder, the only man above the High Table, which is the international consortium of assassins John Wick works for, has a point. You'd think with this third John Wick movie, the franchise is about to wind down the story of John Wick but you don't title movie number three "Parabellum" (i.e. "prepare for war" in Latin) if you're looking to put a cap on things. No, by the end of John Wick 3, John Wick isn't at his wick's end; rather, he's got an even bigger war on his hands.

But we're getting ahead of ourselves. John Wick: Chapter 3 - Parabellum kicks off immediately after the events of John Wick: Chapter 2. The titular black suited killer and dog lover committed a cardinal sin of the assassin's creed and killed an Italian mob moss in the Continental Hotel, which is supposed to be a safe haven for killers. Winston (Ian McShane), the hotel manager, made John Wick "ex-communicado", placing a $14-million bounty on his head. Now on the run, John Wick has to get out of NYC as hordes of multinational assassins come to collect. The first act of Parabellum sees John Wick fighting off assassins while nonsensically leaping around New York City from Chinatown to Queens with no regard whatsoever for geography. No matter, because Wick is trying to get out of Dodge and he returns to his roots, the Russian mafia, where he got his start as Jardani Jovonovich, "a child of the Belarus". John uses up his last favor with the Director (Anjelica Huston) and is sent to Casablanca.

Meanwhile, an Adjudicator from the High Table (Asia Kate Dillon) arrives to clean up the unholy mess left behind by John Wick that's made a mockery of the noble profession of assassination. She lays down the law that the High Table is making some changes and both Winston and the Bowery King (Laurence Fishburne), the leader of the New York underworld, are going to be replaced. The Adjudicator is a force to be reckoned with and she's a big step up as a villain for this franchise. For muscle, she recruits the local cadre of Japanese assassins headed by a wild-eyed and charming Zero (Mark Dacascos). Zero is a big John Wick fan, as are we all, so he's eager to test his skills against the top dog.

In Casablanca, John meets up with Sophie (Halle Berry), another career assassin who goes way back with him, and they run afoul of the High Table's dapper Morocco chief Berrada (Jerome Flynn, who is the second Game of Thrones alum in this franchise after Alfie Allen's dog-murdering baddie in the first film). Speaking of Game of Thrones, Sophie is also a dog lover who fights using two highly-trained German shepherds as her wingmen and their shootout in Casablanca is spectacular. In fact, in one ten minute sequence alongside John and Sophie, John Wick 3 outdoes 8 seasons of Game of Thrones' direwolves combined in terms of dogs fighting alongside humans. But it all has to come back to the Continental for a final showdown between John Wick and the Japanese, where the Baba Yaga lays waste to Zero's entire fighting force before their mano e mano showdown in a tower of glass.

All throughout, John Wick 3's spectacular action is more thrilling and novel than before, with eye-popping choreographed fights and far more variety of colorful and opulent kung fu fighting and kills than the previous film's overreliance on mere gunplay. It's all held down by Reeves' understated and steely charisma. All told, Parabellum is the most rollicking John Wick entry thus far. And, as the Elder summarized, John Wick fought so hard to end up right back where he started, once more on the run from even more assassins trying to kill him. For all of the guff the Marvel Cinematic Universe gets for being one long episodic TV series, the John Wick franchise is even more blatant of that. This movie's title should really have been John Wick: Chapter 3 - Prepare For 4.
Posted by Back of the Head at 10:19 AM