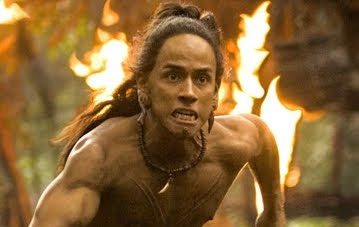 You Could Be Mayan
A few seasons ago when he guest starred on The Simpsons and Homer helped him edit his new movie, Mel Gibson said "It's hell being Mel." These days it's pretty true and it's his own fault. But what's even more true is "It's hell being in a Mel movie." There aren't too many directors who seemingly beat the shit out of his actors like Mel does. Between Braveheart, The Passion of the Christ, and Apocalypto, acting for Mel means you're gonna be filthy, you're gonna get bloody, you're gonna be tortured, and you're gonna get your ass kicked. Jesus had it the worst by far but Mel doesn't take it easy on the Mayans.
The trailers for Apocalypto were remarkably deceptive. I was expecting Mel Gibson to tackle the subject of the end of the Mayan civilization in a way similar to Terrance Malick's The New World. I went in looking for some kind of lyrical or anthropolgical exploration of Mayan culture. The last thing I was expecting was one of the best action movies of the year.
Apocalypto opens with Mayan hunters killing a tapir and then tricking one of their party into eating the tapir's severed balls. It's all testicle-based humor up front, base and ribald. When the violence starts as a hunting party storms the helpless village of the hero, Jaguar Paw, and burns, brutualizes, rapes and enslaves the villagers, it's terrible and brutal. A lot of the movie hard to watch, mostly because Mayans are gross. They're hard on the eyes. Their civilization, while advanced in many ways, was equally brutal: human sacrifices, slavery, mutilizations. While Mel doesn't shy away from showing any of it, it turned out he's just warming up for what he's really up to: crazy ass action.
When Jaguar Paw escapes from the Mayan city and races home to his pregnant wife and young son, Apocalypto turns into a full-on, balls to the wall, action chase movie, and it's awesome. Almost an hour of pure adrenaline follows as Jaguar Paw desperately runs for his life and the evil hunting party gives chase. It turns out Apocalypto is actually a very simple story: A man needs to race home and save his family from people trying to kill them. It's extremely effective, satisfying, and rousing.
The transformation of meek Jaguar Paw into a sort of Mayan Martin Riggs, and his progression from hunted to hunter as he is pushed to his physical and emotional limits, finds the warrior inside of him and fights back is simply fantastic. When he survives a waterfall jump, is "reborn", and defiantly calls out to his pursuers: "My name is Jaguar Paw! This is my forest!" and then dares them: "Come on!" I wanted stand and cheer.
Mel Gibson is a hell of an action director; he's starred in some of the best ever made like Mad Max and Lethal Weapon, and he has learned his lessons well. Apocalypto is really not much more than a heart-stopping thrill ride with a unique Mayan gimmick, but it's the real deal. Through Jaguar Paw's hardships and triumphs and the larger-though-vague setting of the decline of the Mayan civilization, Mel spins an action yarn that thrillingly conveys the indomitability of the human spirit.
Does Jesus show up in the movie? No, but when the cross does appear at the end as Spanish ships arrive on the South American shores, it's as if Mel is saying, "That Jaguar Paw is something isn't he? Too bad he's not Catholic."
Posted by Back of the Head at 3:30 PM