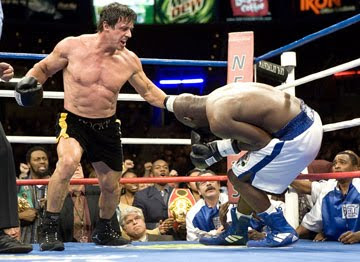 If Rocky Balboa were real and actually owned an Italian restaurant, I'd hang out there all the time. I'd love it sit down to a plate of Italian food made by Mexicans in the basement and listen to Rocky tell the same stories over and over about how he knocked out Clubber Lang and won the title from Apollo Creed. Rocky Balboa is a strange movie; it's about 70 minutes of a first act, a ten minute second act of training for his big fight, and then the fight itself is the third act. And it doesn't matter one bit because the movie works. It embraces the nostalgia those of us who grew up idolizing Rocky have for the character. To see the old man train and go for one more fight where he's the underdog who overcomes impossible odds was awesome. I liked how Rocky was brought into the modern boxing world with all the trappings a real HBO fight would have, including the announcers and the Mike Tyson cameo. I didn't care for how Stallone went for the Sin City-style black and white with color splashes during the fight scene, but that's a minor quibble. It was great to see Rocky one more time and see him resume his place as one of my heroes. He's one of the best movie characters ever. I actually went back and saw Rocky Balboa again the next day just to hang with Rocky once more.
Posted by Back of the Head at 11:20 PM