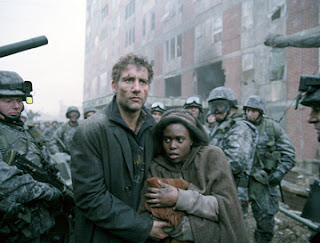 Children of Men, a tour de force by Alfonso Cuaron, paints a harrowing possible future of how the world would degenerate if women were suddenly unable to get pregnant. Clive Owen has to awaken the idealist in himself and protect the first pregnant woman on Earth from enemies on all fronts. In a broken world, with the human race 50 years from extinction, society has all but imploded with only England maintaining a sense of order, at the expense of the immigrants trying to reach its shores.


Children of Men is riveting speculative fiction. And it doesn't need the gimmicks of bald Natalie Portman or a guy in a trick or treat mask who spends his nights blowing up buildings and his days frying eggs in toast. But either way, when the badness finally hits, I'm getting on a boat or plane and going to England. The movies say that's the best place to be when the world comes crashing down. And the movies never lie.

The big question for Children of Men 2:  So, who gets to nail the world's first black baby?
Posted by Back of the Head at 11:15 PM