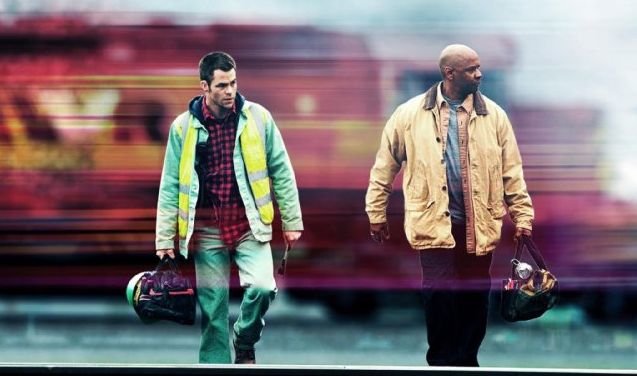 Unstoppable is Thomas The Tank Engine on steroids. It's like Speed 2 except with a train instead of a boat. Unstoppable is also an immensely entertaining, careening joyride.

If there's any justice in this world, runaway freight train 777 would take its place alongside the shark in Jaws as one of the great movie villains of all time.  At the very least 777 deserves to win Best Villain in next year's MTV Movie Awards.  Because bumbling boob Ethan Suplee didn't properly set its air brakes and exited the cab, 777 became the most dangerous vehicle in southern Pennsylvania. Traveling at speeds in excess of 70 MPH, 777 is "a missile the size of the Chrysler Building"; it has over thirty cars attached and sports not only three cars worth of Diesel fuel but several tons of toxic chemicals.  If it derails, it could destroy a town and kill thousands.  Left unchecked it can "vaporize everything in its path."

The only two men who can stop 777 are a couple of down on their luck working men who also happen to look like movie stars: Denzel Washington and Chris Pine. They don't like or trust each other at first but nothing bonds two men like risking their lives to stop a runaway train. Pine, a rookie conductor four months out of training, is estranged from his wife and trying to have a restraining order rescinded so he can see his young son. Denzel is a 28 year engineer facing forced retirement and is himself estranged from his college-age daughters, who are both Hooters waitresses. (Pine with a big grin: "I'm a fan." My man!)  Someone else who could work at Hooters is Rosario Dawson, who runs the rail operations and believes Denzel and Pine are the only ones who can stop 777, despite corporate interference from Kevin Dunn, the Incompetent Executive Who Is Wrong About Everything.

An action picture about a runaway train doesn't necessarily require a great deal of depth or complexity, but the actors bring a convincing urgency and believability to Unstoppable, which is "based on true events".  When Captain Kirk finally, injured foot and all, leaps into the cab of 777 and stops that train cold while Malcolm X cheers from the roof of the rear cab, the blue collar heroism on display is rousing and fun. Denzel even hilariously scores a kiss from Dawson at the end while his Hooters Girls daughters hoot, holler, and applaud.

My pitch for Unstoppable 2: 777 is again a runaway freight train, this time stalking Denzel, Pine, and their families while they vacation in the Caribbean.
Posted by Back of the Head at 6:52 PM