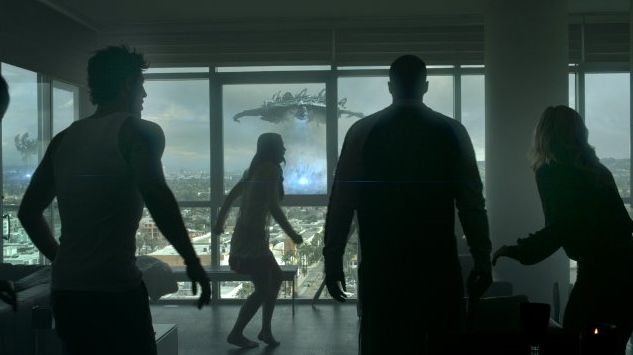 ** SPOILERS **
"I hate LA."
Upon reflection, Skyline's greatest achievement is making one appreciate everything Steven Spielberg's War of the Worlds did right.  Skyline is War of the Worlds for Dummies. The dummies in question are a gaggle of some of the most tedious-to-be-around characters ever to be trapped in a luxurious high-rise penthouse in Los Angeles during an alien invasion.  Eric Balfour is a Brooklyn artist reunited with his childhood friend Donald Faison.  Faison is a big success now, driving a Ferrari and banging skanks (and I mean skanks) like Brittany Daniel and Crystal Reed in said luxurious high-rise penthouse.  Of course, one assumes he's a rapper, but no, apparently he runs a visual effects house or something and wants to bring a reticent Balfour on board.  The character drama revolving around Balfour's pregnant girlfriend Scottie Thompson not wanting to move to LA while Daniel is shocked to learn Faison is sleeping with Reed is excruciating, but we endure to see the aliens.  How is it possible when the aliens arrive, the movie actually gets worse? The unnamed aliens unleash blue lights that vacuum up humans into their motherships.  For some reason, the blue lights also decay people - but they also somehow made Balfour more-than human (in a riff taken from District 9) because he stared at the blue light for too long, or something.  When they're done lighting up LA, the aliens send out tentacled probe thingies and giant monster thingies to grab people, suck off their heads, and smash things, stealing concepts and moments wholesale from War of the Worlds and the also-superior Cloverfield. The aliens have no stated purpose, nor is anyone even remotely curious what they are and why they're here.  I was curious about why the aliens spent so much time hanging around the apartment building Faison lived in.  Seriously, they sent wave after wave of creatures into that one apartment complex to hunt down like six people. The aliens are pretty inefficient, unlike the aliens in Independence Day, which Skyline also rips off when presenting aerial battles between human fighter jets and alien fighter pods. The one amusing moment was how Faison was dispatched, driving in his open-topped Ferrari while knowing aliens were afoot, literally.  The characters are complete idiots.  Balfour kept insisting they escape in a boat because as far as he could see from the penthouse windows, the alien ships weren't docked over the water. I'm sorry, are these the M. Night Shyamalan aliens who are afraid of water? Then the Apartment Building Manager enters their lives; first he seems heroic but then he turns out to be a bug-eyed, bullying lunatic. Finally, after a morbid but at least conclusive sci-fi moment where Balfour and Thompson are sucked into an alien ship, instead of ending and cutting their losses, Skyline makes matters even worse by showing the interior of the alien ship.  Balfour is decapitated and the aliens eat his brain but his brain is "special" for some reason (it glows red instead of blue) and he becomes a rebellious alien ready to fight all the other aliens in a sequel. Holy. Shit. No.
Posted by Back of the Head at 6:13 PM